Hey everyone! Last month, my teammate Frank shared his perspective on a deck bridging the gap between theme decks and competitive play, using 2 cards from Vivid Voltage: Cramorant (swsh4-40) and Arrokuda (swsh4-41) . He also discussed how the recent surge in popularity of Pokémon TCG collecting has also led to an influx in new players interested in the competitive side of the game.

I feel that it's especially important for these newer players to have a solid understanding of deckbuilding. Above all, it will help you utilize the cards in your deck more effectively during competitive play. I also understand that new players may not have the budget to construct VMAX- or Tag Team-heavy top-tier decks and might be looking for something a little less meta, if a bit less powerful.

With all of that in mind, today I'm focusing on another fun, off-meta deck—yet a deck you can certainly still win with—using Vivid Voltage cards: Forretress/Shiftry. This article will review how I constructed my list to be as effective as possible in executing a core strategy. I hope that the new players out there learn some useful tips as they continue their foray into the competitive Pokémon TCG!

First, let's look at the main Pokémon in the deck to understand what they do and why I structured my deck around them.

Forretress (swsh4-114) is the deck's main attacker. Our goal is to use Forretress's Double KO attack to Knock Out both Active Pokémon. Because Forretress (swsh4-114) only gives up a single Prize Card, Double KO trades very favorably with the two-Prize Pokémon-V and Pokémon-GX, and three-Prize VMAXes and Tag Teams, in the meta right now. The drawback is that Double KO is very difficult to set up, costing two  Metal Energy (sm1-171) and two Colorless Energy. You'll see my solution for paying that Energy cost more effectively in a minute.

Shiftry (swsh4-12) is a particularly interesting Pokémon from Vivid Voltage, with one of the coolest Abilities I've seen printed in some time. Its Shifty Substitution Ability gives all Supporter cards in your opponent's hand the "draw 3 cards" effect, instead of their usual effect. The reason I've paired Shiftry (swsh4-12) with Forretress (swsh4-114) is because of this Ability's power to disrupt your opponent and slow their deck down. When the  Marnie (swsh1-169), Professor's Research (Professor Magnolia) (swsh1-201), and Boss's Orders (Giovanni) (swsh2-189) in meta decks are reduced to just "draw 3 cards," it becomes harder for those decks to execute their strategy, and you have more time to set up multiple Forretress (swsh4-114) and win the Prize trade.

Finally, most decks include some form of support Pokémon in addition to their main attackers. Although  Dedenne-GX (sm10-57) and Crobat V (swsh3-104) are common in most meta decks for this purpose, I have chosen to limit this deck to entirely single-Prize Pokémon, so I'm using Snorlax (swsh4-131). Snorlax acts as a "wall" you can sit behind while you set up your Evolution Pokémon in the early game, and even more importantly, allows you to fill your hand up to 7 cards each turn as you do so! This is critical for finding all of those Pokémon lines and the Trainers needed to set them up.

Now that you have a brief overview of the Pokémon in the deck and what the deck is designed to do, let's take a look at the decklist! I'll be discussing each card on the list individually, explaining its value to the deck and the reasoning behind its card count. 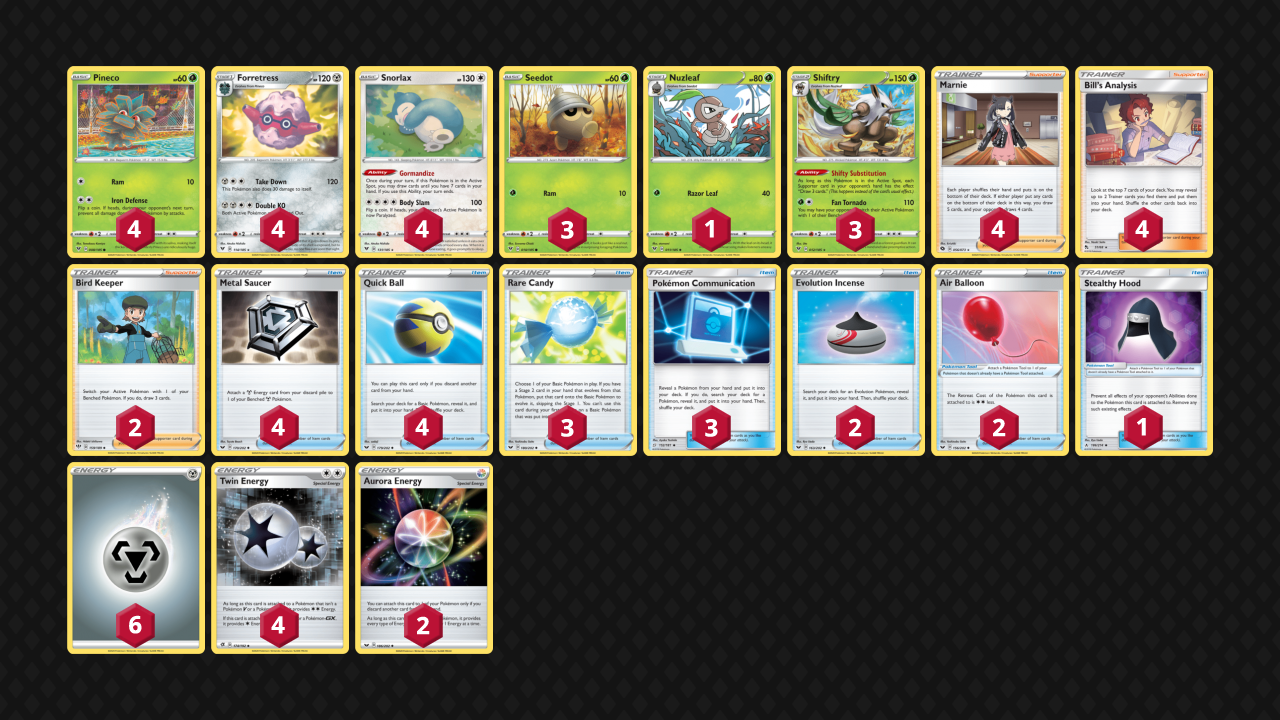 Because this is a deck with multiple Evolution lines, it will be inconsistent by nature, especially in the current Standard format which has very little support for Evolution Pokémon (and current "big Basic"-heavy meta decks tend to give Evolutions very little time to set up anyway). To counter this problem, I've included lines that maximize consistency as much as possible: 4
Snorlax (swsh4-131) because it is your best starter in the deck and you want to start as many games with it as possible, and a full 4-4 Forretress (swsh4-114) line because it is your main attacker and, once it starts attacking, will be KOing itself every turn!

I've chosen not to include any recovery cards (such as Ordinary Rod (swsh1-171) or Brock's Grit (xy12-74)) in the list because they are clunky in early hands and you should have enough Pokémon to take six Prizes in every game, especially when you are trading so favorably against multiple-Prize Pokémon.

You shouldn't need more than two Shiftry (swsh4-12) throughout the course of a game, so I've limited that line to 3-1-3 so that you don't have extraneous copies clogging up the deck. Although the deck would be playable without Nuzleaf (swsh4-11) if you wanted to free up a card slot, I like that Nuzleaf is searchable with multiple cards in the list, so is a bit easier to find than Rare Candy (bw10-85) at the cost of being a turn slower. It also provides insurance against Vikavolt V (swsh3-60), which could ruin your day if you only played Rare Candy (bw10-85).

Marnie (swsh1-169) is a common inclusion, often as a 4-of, in meta decks in this format because it is our most consistent shuffle-draw Supporter, while also serving as a form of disruption towards the opponent. While Marnie (swsh1-169) is not the perfect Supporter for Forretress/Shiftry in an ideal world, it is pretty much the best thing we have. I opted not to play Professor's Research (Professor Magnolia) (swsh1-201) because this is a slow, setup-based deck with limited recovery options, and is bound to have clunky early hands with pieces you'll need later. I didn't want to be forced to get rid of all my resources (Rare Candy (bw10-85), Evolution lines, Metal Saucer (swsh1-170), Twin Energy (swsh2-174), etc.) just so I could draw cards to stay in the game.

The deck's third Supporter, Bird Keeper (swsh3-159), is in the list primarily as a way to move Snorlax (swsh4-131) out of the Active Spot when you want to bring a Shiftry Active or even start attacking with Forretress (swsh4-114). It is also a way to draw a few more cards in a pinch, and can even help deal with Special Conditions that might prove bothersome.

One of the most important aspects of a competitive Pokémon deck is the ability to effectively find your Pokémon, whether it is from a strong "turbo" draw engine or through slower, more specific search cards. In a deck with multiple Evolution lines such as this one, Pokémon search is especially important, because we cannot just grab a couple of Basic Pokémon and be set for the whole game--we need to continually develop our Evolution lines throughout the game.

4 Quick Ball (swsh1-179) is a must because we want to get Seedot (swsh4-10) down on the first turn of the game if possible. If we start the game with something other than a Snorlax (swsh4-131), we also want to find a Snorlax so that we can bring it Active and use Gormandize as soon as possible.

If you intend to test this list yourself, the counts of these search cards are definitely something you can play around with. Maybe you find that increasing the counts at the expense of some of the other slots in the list gives you more consistency, or maybe you prefer a split of 3 Incense and 2 Communication, for example. Just keep in mind that lowering these counts too much will cause you to lose more often, because you'll be more likely to whiff your important Evolution Pokémon, and won't be able to execute your deck's intended strategy.

The Energy lines are another aspect of Forretress/Shiftry you can mess with in your own testing. 4 Twin Energy (swsh2-174) feel needed to pair with your 4 Forretress (swsh4-114) and ensure that you consistently draw a Twin Energy when you need one. Ideally, you will have the ability to use Metal Saucer (swsh1-170) and Twin Energy (swsh2-174) to power up a Forretress (swsh4-114) in one turn at some point during the game. Thus, it's also important to play a high count of  Metal Energy (sm1-171) so that you're able to discard some in the early game, to synergize with Metal Saucer (swsh1-170).

This can be achieved with Quick Ball (swsh1-179), but another play you may overlook is using a  Metal Energy (sm1-171) to Retreat a Seedot (swsh4-10) at the start of the game to pivot into Snorlax (swsh4-131). It could also be worthwhile to add 1 or 2 copies of Professor's Research (Professor Magnolia) (swsh1-201) into the list as another way to get  Metal Energy (sm1-171) into the discard, although I discussed the drawbacks of that card in this deck earlier.

I included 2 Aurora Energy (swsh1-186) because Shiftry (swsh4-12) has a Grass Energy (base4-127) as part of its attack cost and there are some situations in which you may want to attack with Shiftry. This includes games where you are unable to find Forretress (swsh4-114), Metal Saucer (swsh1-170), or Twin Energy (swsh2-174) early and need to rely on Shiftry (swsh4-12) while you dig for those, and games against other single-Prize decks where you cannot always rely on 4 Forretress to carry you through a game because of the even Prize trade. Aurora Energy (swsh1-186) also functions as another way to get  Metal Energy (sm1-171) into the discard pile and a way to thin unwanted cards out of the deck in the late game to combat Reset Stamp.

As mentioned, this is a deck with a Stage 2 as a key part of its strategy, and thus it is important not only to find the Basic on turn 1, but to find the Stage 2 itself along with a Rare Candy (bw10-85) on turn 2. I mentioned that you should not need more than 2 Shiftry (swsh4-12) in the course of a game, so the third Candy is simply a precaution against Prizing and early discards, and just makes it a bit more likely you draw into a Candy off a Marnie (swsh1-169) or Bill's Analysis (sm9-133). Ideally, for more consistency, we would play a fourth Candy, but the list is already tight on space and sacrifices need to be made somewhere!

Air Balloon (swsh1-156) gives repeated mobility to the deck, in comparison to Bird Keeper's single-use Forretress (swsh4-114) when you are ready to attack. Because Pineco (swsh4-8) has 2 Retreat Cost, Air Balloon (swsh1-156) would also be helpful in Retreating a Pineco (swsh4-8) on turn 1 to bring up Snorlax (swsh4-131), preventing you from having to expend a Twin Energy or simply miss a turn of using Snorlax.

If you are looking for a budget deck, or even just a unique non-meta archetype, I recommend that you give Forretress/Shiftry a try. It may not win you a high-level tournament, but it's fun for casual play, and makes a great learning tool for new players as you transition from theme decks to competitive decks.

I especially tried to go beyond simply presenting a decklist to copy and paste, and instead explain exactly why I chose the cards that I did. One of the most important hurdles for beginning competitive players is understanding deckbuilding decisions, and I hope this article helps clarify that process a little bit! If you know the reasoning behind card inclusions, not only will you be able to use those cards more effectively in-game, but you will be better at crafting your own decks from scratch in the future.

If you have any questions about this article or anything else Pokémon-related, feel free to reach out to me on Twitter @twhitesell42. If you're interested in affordable,  knowledgeable coaching for players looking to grow competitively, I offer that, too! (http://www.ptcgstats.com/p/coaching.html). Be sure to follow my team @UNDNTD. Until next time, thanks for reading!