If you're anything like me, you're probably having Yu-Gi-Oh withdrawals.

Thanks to the worldwide pandemic, most of us can't go to our local card shops and duel with friends, at least not in an official capacity. Konami's suspended organized play until the end of June at the earliest, and still with no word on the return of Regional Qualifiers and YCS events. Sure, online solutions exist, but there's just no replacing the physical nature of playing a trading card game with an opponent across the table from you.

Thankfully, we've still been getting new product releases like Eternity Code, which I'll be focusing on today. While this week-old set (at least in North America) has its fair share of high-dollar chase cards like Accesscode Talker and Ghost Mourner & Moonlit Chill, I actually like the set for an entirely different reason, and that's all of the numerous support cards for older strategies. ETCO might have more legacy support than any big, quarterly booster release in the last couple of years. So today, I want to highlight a few of those cards and the decks that you can play them in.

If you're bored of Adamancipators and Eldlich, these can make for great new deck building projects. 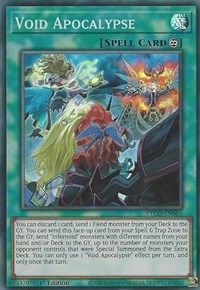 Let's start with Void Apocalypse. This new Continuous Spell is designed to support Infernoids, and its overall design follows in the footsteps of existing cards like Void Imagination and Void Vanishment. At the cost of a discard, Apocalypse lets you send any Fiend monster from your deck to the graveyard. Alternatively, you can also use its second effect to send Infernoid monsters from your hand or deck to the grave, up to the number of monsters your opponent has that came from the Extra Deck. Obviously, each of those effects is great for Infernoids, which thrive in the Graveyard.

It doesn't stop there, though. Void Vanishment can be used in the recent Unchained deck, the popular D/D/D theme, or even with Dark Necrofear and its support cards. They're all themes that are entirely composed of Fiend monsters, that don't mind an expedited trip to the graveyard. 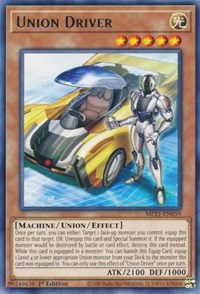 Union Driver's another cool new card from Eternity Code with a lot of potential. On the surface, it looks like your typical Union monster. You can equip it to any monster, or unequip it and Special Summon it to the field. Nothing too special, right?

Well, Driver's real value comes in its second effect. While it's equipped to a monster, you can banish Driver and instead equip that monster with any appropriate Union monster from your deck. That alone makes Union Driver a huge asset for any deck that uses the Union strategy. ABC-Dragon Buster quickly comes to mind, since Union Driver gives you immediate access to any one of A-Assault Core, B-Buster Drake, or C-Crush Wyvern, which then set the deck's full strategies in motion.

And of course, the infamous Union Hangar Field Spell can get you a copy of Union Driver straight from the Deck. If you do that, there's even another perk: Hangar normally doesn't allow you to summon the Union Monster it equipped on the same turn, but by getting Driver, you can banish Driver, grab the actual Union monster you want from the deck, and then summon it, getting around that pesky restriction!

But it doesn't actually stop there. The recently released Machina Madness Structure Deck also includes a new support card, Unauthorized Reactivation. Like Union Hangar, it lets you equip a Union monster straight from your deck and it also stops you from summoning it. But once again, Driver can sidestep that restriction. So whether you're building ABC's, Machina, or another Union-based strategy, Driver's almost certainly worth picking up, especially in case the infamous ABC-Dragon Buster's unlimited come September, or on a future Forbidden & Limited List. Even though Driver's an Ultra Rare, it's currently selling on TCGplayer for just over a dollar, making it a bit of a no-brainer if you're looking into those strategies. 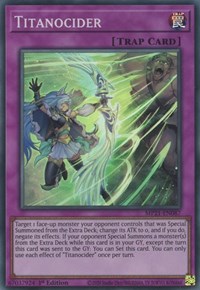 We'll wrap things up today with Titanocider, a Secret Rare trap that I think's been woefully underrated by many.

If you've been playing for even as recently as last year, you're probably familiar with Lost Wind, a trap card that can negate a Special Summoned monster's effect, halve its ATK, and then later set itself back onto the field. Titanocider operates very similarly, but with a few small differences. While Lost Wind can target any Special Summoned monster with its effect, Titanocider can only target ones that originated in the Extra Deck.

That admittedly makes Lost Wind more flexible, since it can be useful against a much wider range of monsters (though, admittedly, the biggest threats in the game tend to be Extra Deck monsters). Another small difference is that Titanocider makes the monsters' ATK become 0, while Lost Wind only halves it. In that way, Titanocider guarantees that even your smallest monsters can attack over your target, although both cards are still very useful in that regard.

But the biggest difference between Titanocider and Lost Wind is each of their recurring effects. When your opponent summons a monster from the Extra Deck you can set Lost Wind again from your Graveyard, but it'll be banished when it leaves the field. Titanocider has an identical effect, except it won't be banished. That actually means that Titanocider can return to the field indefinitely over the course of a duel (keeping in mind that it's still got a hard once per turn clause on the effect, and it can't happen the turn it was sent to the graveyard). While it's a bit slower than Lost Wind, I think Titanocider still has the potential to be a huge thorn in your opponent's side, since it's got so much potential long-term value in a grindy duel.

I could see Altergeist players, who recently got their ace monster Altergeist Multifaker back at three copies, loving a card like this. It could have a place in a Paleozoic deck too, which thrives on activating trap cards. But to me, the best part about Titanocider is that it's a Secret Rare card currently selling for around $4. That makes it a great potential grab, especially if the card ends up being a big deal later on.

Alright, so those are three interesting cards in Eternity Code that I think you should take a look at. Each one has myriad uses and the potential to be played in future formats, even if they aren't making huge waves right now. They're all affordable, at least for the moment, and you might have already pulled one if you've been opening Eternity Code packs. If not, they're just a click away. See you guys next time!