It's a deck people just can't get away from. Dating back to Zane Truesdale, the resident badass of the Yu-Gi-Oh GX anime, Cyber Dragon and all of its subsequent support has become a mainstay in both competitive and casual Yu-Gi-Oh.

Remember when this thing first arrived? Cyber Dragon was virtually unstoppable when it debuted in Cybernetic Revolution back in 2005. A free 2100 ATK beatstick that didn't take up your Normal Summon? Going second didn't seem so bad when Cyber Dragon had your back. 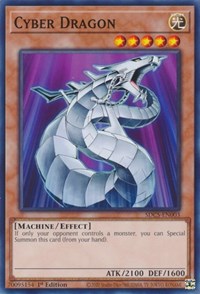 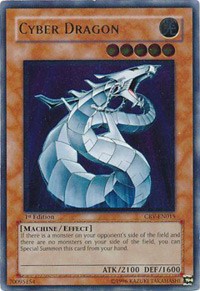 Wow, have times ever changed. 2100 ATK monsters with no additional effects literally used to be game-defining cards back in the GX era. These days? Not so much.

But like other classic strategies - think Red-Eyes Dark Dragoon and Cyber Slash Harpie Lady - Cyber Dragon been buffed with lots of new cards over time, and the original Cyber Dragon is still an important part of the strategy. That modern support's helped keep Cyber Dragon at the forefront of Yu-Gi-Oh over the years, and I'd argue that it's really become one of the game's flagship cards, only behind stuff like Dark Magician and Blue-Eyes White Dragon.

My biggest gripe with Cyber Dragon is simple - everybody thinks the deck is solved and everything's been figured out. "Look at me, I'm summoning Cyber Dragon Infinity and maybe OTK-ing! Red-Eyes Dark Dragoon! Yippee! I'm special!"

And sure, the people who say that aren't completely wrong. Cyber Dragons can efficiently summon two of the best Extra Deck threats in modern Yu-Gi-Oh, and pull OTKs out of nowhere. But that's really been beaten to death at this point. It's not even beating a dead horse - it's like beating the tombstone where a horse has been buried for decades.

We get it. Yes. Cyber Dragon Infinity. Great. Wonderful. 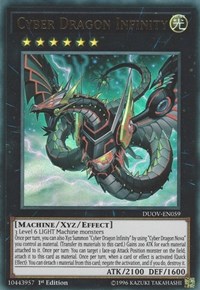 Today, I'm updating one of my favorite lists. The core tenets of the deck are still the same, and I'm still running some of the stranger cards, but I'm making some changes First, I'm flipping from Witch of the Black Forest to Sangan. While I liked Witch of the Black Forest because she let you summon Artemis, the Magistus Moon Maiden and led into Galaxy-Eyes Solflare Dragon - a gateway card for Cyber Dragon Infinity and Red-Eyes Dark Dragoon - Sangan searches Ash Blossom & Joyous Spring. It's hard to beat that hand trap right now, especially when you're sitting behind two negates.

And despite this being a "go-first" deck, I'm still keeping around Jizukiru, the Star Destroying Kaiju. Yeah, I know, it's not a great draw, but you can always use it as fuel for Galaxy Soldier if you don't need it, and sometimes you just have to, ya know, win the duel over the course of multiple turns.

So sad, I know. But life doesn't always go exactly to plan. Let's get into the updated list for the control variant, the first of two Cyber Dragon builds I want to show you.

Once you play a few games with this deck, you'll start to notice the cards you don't really want to draw. It's funny - certain cards can be great going first or going second, often for very different reasons. I personally don't like Cyber Revsystem, but it's frustratingly good at bailing you out of bad situations. Just Normal Summon Cyber Dragon Core, search Cyber Revsystem, then Link Summon Salamangreat Almiraj.

Once you revive Cyber Dragon Core with Cyber Revsystem, you'll have the materials you need for Predaplant Verte Anaconda. It's really useful to play through negates when you're going second, but it barely makes the cut going first.

Back to the bricks: sometimes you're going to draw cards you don't want to see. It's unavoidable in this sort of strategy. So which would you prefer: would you rather those "bad" cards be combo pieces, or traps? I realize I've shoved alot of Solemn Judgment into this deck, but I'd honestly rather draw one of those and not be able to use it immediately, over a dead combo piece I just don't need. 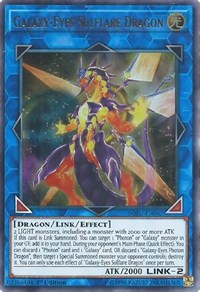 We now have Pot of Prosperity too, which is surprisingly great for Cyber Dragon. The Extra Deck is tight here, but if you can guarantee a field of Red-Eyes Dark Dragoon, Cyber Dragon Infinity. and a Solemn trap, that's pretty hard for any opponent to fight through. Digging aroun with Pot of Prosperity also lets you skip out on certain cards. I'll stand by Sangan, but if you're excavating six cards at a time, all the time, you need to be careful with your math and avoid playing too many Normal Summons.

Summoning Cyber Dragon Infinity isn't always possible, but there's another single negate hidden in the Extra Deck. Galaxy Soldier quite easy to see thanks to Cyber Repair Plant, so fetching and fielding a Light monster with 2000 ATK to search Galaxy-Eyes Photon Dragon and make Galaxy-Eyes Solflare Dragon is easy. 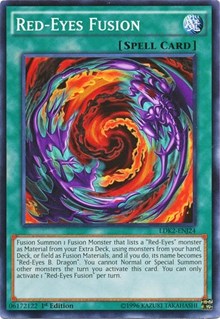 Basically, you'll typically have Predaplant Verte Anaconda for Red-Eyes Dark Dragoon, and either Cyber Dragon Infinity or Galaxy-Eyes Solflare Dragon as your extra body to negate things. Cyber Dragon Infinity the easier of the two to make, but with the heavy trap lineup, actually fielding multiple Level 5 monsters isn't always the play.

It's really nice to search Galaxy Soldier off Galaxy Soldier to get two of them on the table, but you won't always have another Light monster in hand. Perhaps if you played Effect Veiler instead of Ash Blossom & Joyous Spring, the math would be more in your favor, but I'm picking my battles here and I really think Ash Blossom & Joyous Spring the way to go.

That control strategy's great. But me? I want to tap into the magic I felt going second with Cyber Dragon a decade and a half ago.

I have a tendency to go overboard when I'm creating new decks. Part of that is the sheer fun factor: playing weird cards that catch your opponent off guard is a blast. But part of that also comes from just throwing as much at the wall as I can, as a real strategy to see what works. I refuse to believe that any given strategy is totally solved, so I'll always be down to try something else.

But… we can't do everything. I've thought alot about going-first and going-second builds, trying to maximize control strategies with OTK elements, and I realized that you can't seamlessly blend the best OTK strategies into a control variant. And thus, I decided to present you with an OTK version of the deck as well.

And then Kang Hyon Jung had to muck up all my plans at the North American Remote Duel YCS, finishing 9-1-1 after Swiss to qualify for Top 32! His deck's fantastic, and if you'd like to hear some of his analysis, feel free to check out this video with the deck breakdown.

I don't have any complaints about his build of the strategy, but I did want to refine it to make it a more pure OTK deck. Kang Hyon Jung created his build knowing full-well he'd be playing against a wide array of strategies, and more often than not he' find himself in a going-first situation. When you're playing more than eleven rounds of competition, you have to be selective as to what you run, and the possibilities you need to anticipate. More than anything, you can't play as many dead cards, because the law of big numbers will eventually expose any consistency issues in your build.

So yes, I'm cutting Red-Eyes Dark Dragoon for this second build. It's probably the best backup plan in the entire world, and it eradicates monsters in your way, but you can't draw an errant Red-Eyes Black Dragon and clog your hand with it if it's not it in your deck in the first place.

There isn't as much nuance in this deck as the first one: it's a pretty straightforward build. The closest thing to a backup plan is the second copy of Chimeratech Rampage Dragon, but half the time you'll banish it with Pot of Prosperity anyways.

The biggest changes involved taking out everything that didn't propel you to a Cyber Dragon-centered OTK. That, and breaking boards when you invariably go second.

Three copies of Overload Fusion means you'll have a decent chance to dig for one, and then play a second via Predaplant Verte Anaconda. But instead of Red-Eyes Dark Dragoon, I wanted to pump out big Cyber Dragon Fusions instead.

Chimeratech Rampage Dragon such an amazing card: it loads up your graveyard to set up future plays, destroy spells and traps, and gains additional attacks. Combined with Cyber Dragon Sieger it's an OTK machine. 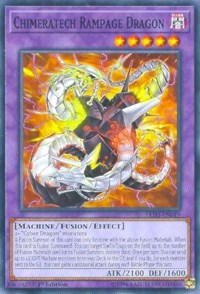 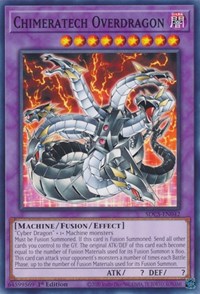 Not only does it gain 800 ATK for every monster used as Fusion Material, but it gets multiple attacks on monsters for every material you use. Chimeratech Rampage Dragon may be better in most situations, but Chimeratech Overdragon can steal games all by itself.

It's a somewhat radical idea in 2021, but hopefully with the promise of instantly ending the duel, I have you convinced. To win going second, you'll need to power through whatever your opponent's set up, and hopefully do it in the most efficient way possible. 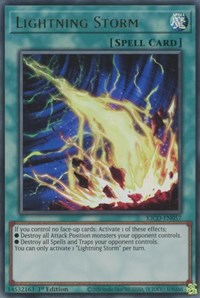 Cards like Dark Ruler No More and Lightning Storm may seem like worse options than Forbidden Droplet and Cosmic Cyclone, but their brash and widespread effects make them tremendously useful. (And wow, Forbidden Droplet still pretty expensive!)

After all, your opponent will no doubt set up a field with multiple negates, or at the very least multiple cards for you to try and slam through; you'll need stuff to clear all the clutter. If you take out cards that could be bricks, or cards that are only good in very specific situations, you have more deck space for the bulldozer that is Lightning Storm.

The going-second version might not be the most affordable Cyber Dragon deck ever, but success has its price… and sometimes you'll need to throw everything you can at your opponent to break through, and seal the deal.