It's hard to believe that a sealed product could lose 50% of its value in just 11 days. It's even harder to believe that such a price drop could bode well for the longevity of a game.

Well, call me Naruto, because I'm asking you to believe it.

On Monday, September 13th, First Edition booster boxes of the latest Flesh and Blood (FAB) set, Tales of Aria, were preselling at a brisk pace for $230 each. Buyers had good reason to think they were getting a nice deal.

Legend Story Studios, the folks behind Flesh and Blood, release First Edition booster boxes a full month before regular, "Unlimited" boosters. Since only First Edition boxes can include Cold Foil cards, the rarest and most valuable premium cards in the game, they're essentially premium products—and priced accordingly. Players have a choice: they can wait a month and get the same cards for less when the Unlimited boosters release, or pay the premium for a chance to pull a Cold Foil and start playing with the new cards immediately.

Unsurprisingly, many players pick the latter option. And when there aren't enough First Edition boxes for everyone who wants one, the price rises to compensate: low supply and high demand equal high prices. That's what happened with product-hover id="231038", which on the 13th, were selling for an average of $267 each. In that context, $230 looked pretty appealing. 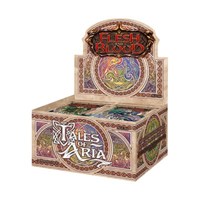 From the outside, the crash of Tales of Aria looked like a market bubble popping. Clearly, retailers overestimated demand for this new card game, priced their boxes accordingly, and had to slash prices once it was obvious nobody was going to pay $130 over the $95.81 MSRP. Right?

The difference between Tales of Aria and previous FAB sets is that there was finally enough supply to meet that demand. Legend Story Studios is an upstart publisher out of New Zealand that had the bad luck to launch a physical card game on the eve of a global pandemic. They had to deal with the same supply chain issues as everyone else while trying to convince retailers to give their upstart game a chance. That confluence of factors severely limited the number of FAB boxes available in North America for the game's first few sets.

As their game caught fire and the world slowly reopened, LSS ramped up production. We know this from the print run numbers they publish.

The Future of Flesh and Blood Finance

What's this mean for sellers? Well, it's a good news/bad news situation. On the one hand, the cat is out of the bag on Flesh and Blood. The days of selling for 200% of MSRP are almost certainly over. Tales of Aria is currently hovering around $20 over MSRP, which isn't bad, but sure isn't $100 either.

On the other hand, there's a new TCG on the market with high demand that is solving its allocation issues. I'd still call that a net positive for retailers. We can't predict whether Flesh and Blood will defy the two-year curse of trading card games, but dying games don't typically top sales charts. We'll know more when Unlimited boxes of Tales of Aria release on November 12th.

If you're a buyer who preordered Tales of Aria on September 13th, that sucks, and I'm sorry. The good news is that prices on First Edition boxes are much more likely to be reasonable going forward. If all you want is to play with new Flesh and Blood cards as soon as they're available, that's going to be a lot easier in 2022 than it was in 2021 and 2020.

If you just want to make back your investment, I'd recommend that you keep your First Edition Tales of Aria box sealed for as long as possible. Legend Story Studios has been exceptionally transparent about their efforts to keep Flesh and Blood cards collectible. They've explicitly promised to never reprint Cold Foil cards at Cold Foil rarity, and when Crucible of War went out of print earlier this month, they announced the end of the print run, causing prices of price-hover id="224724" to spike from $775.00 to $830.98 overnight.

It's rare (almost unprecedented) for a publisher to take a stance on the secondary market, but LSS is taking deliberate steps to increase the resale value of their cards. If you can wait until Tales of Aria goes out of print, you have a better chance of selling closer to the price you paid initially.

Ultimately, the fact that Tales of Aria is selling for close to MSRP means that more players can afford to give Flesh and Blood a try. That's good news whether you're a professional retailer, a casual card flipper, an early adopter or a brand new player. TCGs live and die by the size of their player base, and $200+ booster boxes frighten away potential converts. When more cards are available at lower prices, more curious players will try Flesh and Blood for themselves, and more of them will become your future game buds or customers.