The release of the next Pokémon TCG set, Evolving Skies, is right around the corner. Whether you are a hardcore Dragon-type trainer or want to collect the best Eeveelution (hint: it's Flareon), this set is packed with exciting cards for everyone.

Everyone will be cracking packs of Evolving Skies in a fervor for the first few weeks of the set's release. With all of the Eevee-inspired products, collecting your favorite Elite Trainer Boxes or Tins will be the first thing on everyone's mind on release day. Once you get your hands on some booster packs, however, it is important to remember the great adage taught by esteemed country singer Kenny Rogers: You gotta know when to hold 'em.. Know when to sleeve them so they can increase in value.

Today's article is all about the top 10 cards you'll want to keep an eye out for when cracking your Evolving Skies packs. 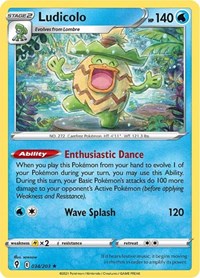 Ludicolo may be a Stage 2 Pokémon, but it is definitely ready to dish out a wallop! The artwork of this card is incredibly vibrant and will shine in holo-foil, but the real reason you want this card is for the pure "meme-ry" that players will be trying to pull off! Ludicolo's ability Energetic Dance makes it so that during the turn you evolve into it, your Basic Pokémon's attacks do 100 more damage. While this means you'll be stuck with product-hover id="213078" and product-hover id="246829" on your bench when trying to set up this combo, the payoff is a product-hover id="194953" attack that would put product-hover id="136935" to shame.

This won't win anyone a tournament, but it is entertaining enough to earn Ludicolo a spot on the list. 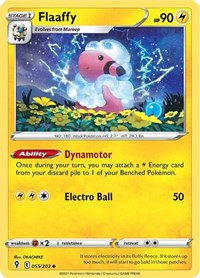 Flaaffy is probably the best Stage 1 non-rule box Pokémon to come out of Evolving Skies. As you'll see later in the list, Dragon-type Pokémon are coming back strong in this set, and having access to Dynamotor will be a make-or-break strategy for any deck looking to win with product-hover id="246730". In the past, cards that allow you to reuse resources from the discard pile have made waves in the competitive scene, and Flaaffy will definitely continue the trend. 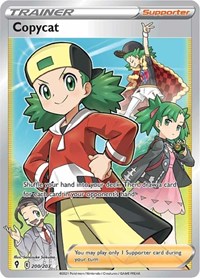 On top of gameplay reasons, the product-hover id="246793" is outstanding. The Copycat Leon and Marnie are amazing and perfectly embody the feeling of those characters, while the Copycat Rose sneaking in the corner of the art is hilarious. While full art versions of supporters are almost always valuable in a set, you can expect Copycat (Full Art) to be leading the pack in the next few weeks!

This might be bending the rules of Top 10s, but it is difficult to put one of these cards on the list without including the others. Chilling Reign reintroduced product-hover id="241878" product-hover id="241879" product-hover id="241880" to the game, and Evolving Skies is continuing the trend with three more. Basic Energy cards are an integral part of the game, so players will always chase an opportunity to bling out their decks with the rarest versions of those cards available. While they may not be the most exciting cards to pull, these energies are always valuable and will not fluctuate in price as much as some of the other cards on this list. 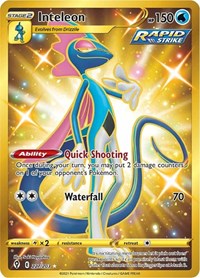 The Inteleon with the ability product-hover id="241696" was printed in Chilling Reign, and despite being just a Holo Rare, still carries a price tag of $5. This card made an impact in the Standard metagame after its release and it is already seeing a second printing in Evolving Skies as a Secret Rare.

As we saw with the product-hover id="241875" in Chilling Reign, these Gold reprints of Standard-playable cards can be worth a lot of money. Currently, the secret rare Snorlax has a price of $100 and you can probably expect this Inteleon to hit close to that number after release. Though not as recognizable as Snorlax, Inteleon gained a lot of popularity by being one of the starter Pokémon in the Galar Region, and this card could easily be one of the hidden gems in Evolving Skies. 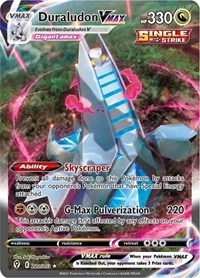 Now it's time to talk about the most exciting part of Evolving Skies: the Dragons! In the TCG, Dragon-type Pokémon are known for having limited weaknesses and incredible power, but needing multiple types of energy in order to use their best attacks.

The alternate art of product-hover id="246754" conveys all of the imposing strength of the Pokémon known to put Skyscrapers to shame. There is something fearsome about the alternate art that is missing from the normal versions of this card. The awe-inspiring art matched with the potential to completely reshape the meta makes Duraludon VMAX an excellent card to pull from your packs. 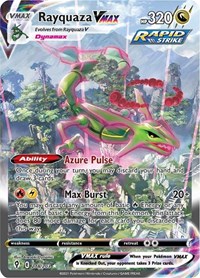 Few Dragon-type Pokémon are truly as overwhelming and powerful as the Sky High Pokémon, Rayquaza. Rayquaza VMAX is the face card of Evolving Skies opposite Duraludon, has the Rapid Strike keyword, and requires the use of Fire and Lightning Energy.

Where Duraludon VMAX is focused on survivability and anti-meta strategy, Rayquaza VMAX is all about raw power. Their ability Azure Pulse lets you discard your hand and draw three new cards, which can be made even more powerful considering product-hover id="246897" Dynamotor ability, but the card's real strength is all in the Max Burst Attack. For each basic Fire or Lightning energy you discard, the attack does 80 more damage. Since the attack has no upper bound limiting how many energy cards you can discard, this attack could be a one-hit KO to any other Pokémon in the game! While Rapid Strike decks have already seen plenty of success with product-hover id="234268" as their boss monster, Rayquaza VMAX could break out into a whole new deck that utilizes Rapid Strike support cards to make a powerful, new deck worthy of a super-ancient Pokémon.

Like product-hover id="246754" alternate art, product-hover id="246733" artwork is outstanding. Seeing Rayquaza soaring through an ancient and ruined world is beautiful and a perfect fit for a Pokémon of this caliber. As one of the most iconic Dragon Pokémon, Rayquaza VMAX will be one of the most sought-after cards in the set and will carry a high price tag for months to come. Be sure to get your copy early!

There may not be much more to say about the gameplay impact of Rayquaza V and Duraludon V, but the alternate art versions of these two cards are so AMAZING that they deserved their own spots on the list.

Starting with Battle Styles, we have seen plenty of alternate art versions of cards that allow artists to try something new to reinvigorate the looks of popular Pokémon. The style of Rayquaza V and Duraludon V's alternate arts are something that the game should definitely continue to do in the future.

At its heart, the Pokémon franchise is all about the bonds between Pokémon and Trainer. The video games are focused on your bonds with your favorite Pokémon, while the anime has shown various stories of how people can work with, bond to, and love Pokémon in the world. The art on Pokémon cards nearly always focuses on the Pokémon's combat prowess or abilities, but the artwork of these two cards show Pokémon as equally capable of love and bonding with their Trainers. Seeing product-hover id="246797" eating a delicious meal with Duraludon and Rayquaza protecting product-hover id="175500" and Aster's backs while she traverses the Desert Ruins is amazing in an entirely new way not previously seen on a Pokémon card. They are some of the coolest cards in the set, and I sincerely hope that this is something that is explored more in future sets.

It would be unfair to go through all the cards of Evolving Skies without talking about the new Eeveelution cards found in V and VMAX form. Eevee has been a fan-favorite since Generation 1 and is secretly the fourth Starter that everyone always wanted in the games. This was so strongly felt by the community that, in 2018, Eevee finally became a starter Pokémon in the remake of Pokémon Yellow!

All of the Eeveelutions are present in the set as Pokémon V or VMAX and have a wealth of alternate arts that will all make you go "Awww" followed by "I must have this card!" It is really cool to see all of the evolutions represented in this set (even if some of the versions were cut from the set to be released as promos for product-hover id="243571"). The alternate arts for the Pokémon V show off how adorable the Eeveelutions are, especially the product-hover id="246747", but the absolute best cards are the alternate art VMAX Eeveelutions. 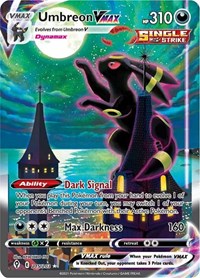 Beyond the beautiful artwork of the other VMAX alternate arts is the absolutely stunning Umbreon VMAX alternate art. The artwork of this card shows a Dynamax Umbreon climbing onto a tower to be able to reach the moon. The moonlight illuminating the sea behind Umbreon is stunning and possibly the best artwork found on any Pokémon card to date.

There are a lot of cards in Evolving Skies that will keep you cracking packs to find that sweet, sweet value. Whether you're looking to collect all the Eeveelutions or you just want to get your playset of product-hover id="246767" and product-hover id="246754", there is plenty of stuff for all kinds of players. Even beyond this list, there are a lot of potent cards in Evolving Skies that could hold value for a long time. While Chilling Reign and Battle Styles were great during the release window but eventually became stale, Evolving Skies has packed everything possible into the set to keep players happy well into the release of Celebrations.