Apart from the surprise appearance of the Ghost The Winged Dragon of Ra (Ghost Rare) in Rage of Ra last year, we haven't seen Ghost Rares since Dimension of Chaos. That was 2015! It's been over half a decade since Ghost Rares were a regular part of the Yu-Gi-Oh! TCG, but they weren't always so exclusive. 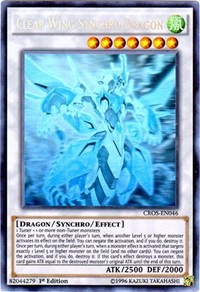 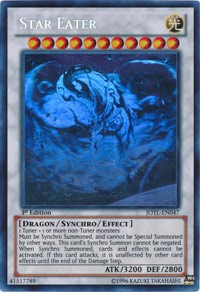 In the past, every core set from 2007's Tactical Evolution to 2016's Dimension of Chaos included exactly one Ghost Rare card. Like today's Starlight Rares, Ghost Rares were the rarest cards in each set and often among the most expensive. That said, Ghosts weren't always as valuable as they are today. Ghost Rare versions of key Synchros like Stardust Dragon (Ghost) and product-hover id="28432" were pricier than their Ultra, Ultimate, or promo Secret Rare printings, but even in 2012 you could pick up a 1st Edition Stardust Dragon (Ghost) for around $50.

Today that same card could cost as much as ten times its 2012 price. That's totally unlike Starlight Rares; nearly all Starlights debut as the most valuable cards in their set. 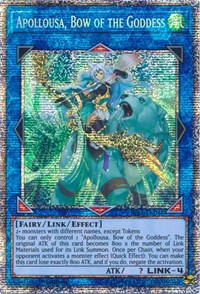 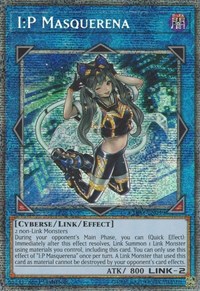 Ghosts became instant collector's items when they fell out of mass circulation post Dimension of Chaos. Since 2016 the value of every Ghost Rare in the game has risen massively, and upcoming cards in Ghosts from the Past are also being targeted by speculators, investors, and collectors. If you had the foresight to hold on to your Ghosts from 2015 on back, or if you just happened to collect Ghosts for whatever reason, you might be surprised to learn just how much these cards are worth today.

Just a quick note about how I'm ordering each card for the Top 10: the limited supply of Ghost Rares makes finding a consistent price for any condition a bit of a challenge. In each case I'm using a rough estimate based on TCGplayer listings and sales history of Unlimited Near Mint copies. There are too many outliers to try to use Market Prices in this case, but this guide should give you a strong idea overall.

That said, let's dive in and count down the ten most valuable Ghost Rares in Yu-Gi-Oh today. 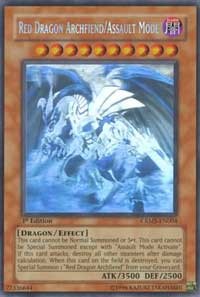 Remember the Assault Mode gimmick from 2009? It was the first in a long line of mechanics that 'upgraded' the 5Ds era's signature monsters, Red Dragon Archfiend and Stardust Dragon.

Unfortunately for Red Dragon Archfiend, Stardust Dragon/Assault Mode was a vastly superior card that nearly saw play in TeleDAD decks before the Forbidden & Limited List crushed that strategy in March of 2009. Crimson Crisis didn't become the launchpad for Assault Mode monsters that Konami might have been hoping for–instead it debuted the instantly-competitive Blackwing theme–but /Assault Modes were revisited over ten years later in Dark Neostorm.

As you might expect, /Assault Mode cards just aren't worth playing, so product-hover id="29068" remained a relatively cheap Ghost Rare for many years. Today an Unlimited Near Mint copy will run you around $130. 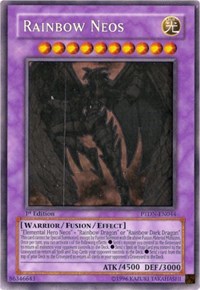 product-hover id="27476" was the third Ghost Rare released in the TCG, but it was largely overlooked because it launched in one of the most stacked booster packs in Yu-Gi-Oh history. The Phantom Darkness debuted format-defining cards like Allure of Darkness, Dark Grepher, Armageddon Knight, and Dark Armed Dragon. Ghost Rares might be cool, but they're not a 2800 ATK monster that's Special Summoned from your hand destroying at least three cards.

Rainbow Neos is probably more playable today than it's ever been, thanks to Predaplant Verte Anaconda, but it's still mostly collectors that are picking up the Ghost Rare at $135 each. 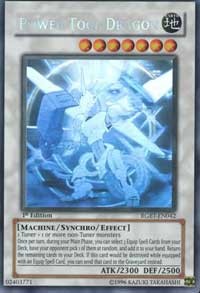 At $150 a Ghost Rare copy of product-hover id="31944" will run you about three times as much as its Ultimate Rare printing from its debut set, Raging Battle.

Power Tool Dragon surprised me numerous times over the years by suddenly becoming the go-to solution for a modern strategy that uses Equip Spells. Last year Infernobles played it to find their themed Equip Spells, plus the now-Forbidden Smoke Grenade of the Thief. As a result, even common copies of Power Tool Dragon are sitting at about $8 online. 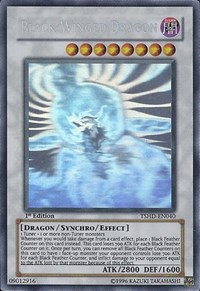 Our first 'true' Signer Dragon on this list, Black-Winged Dragon was the cover card of The Shining Darkness in 2010 and the hidden ace of the Blackwing-playing anime character Crow. Unfortunately it's also among the least-useful Ghost Rares, and a generally unimpressive Synchro.

That said, at $180 product-hover id="35047" clearly a target for collectors who are looking to upgrade their Signer Dragon collection. You can actually build the entire Signer Dragon series in Ghost Rare–if you accept that Life Stream Dragon and Power Tool Dragon are interchangeable–although surprisingly, product-hover id="33223" is cheaper than every card on this list. That's probably because it's Forbidden, but while it was legal it was a vastly superior card to Black-Winged Dragon. 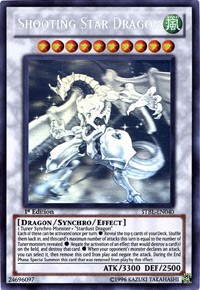 We're getting into some wild territory now. product-hover id="38634" from Starstrike Blast will run you about $250 if you're chasing a Near Mint copy, and that's largely driven by its connection to the card at #1 on our list. 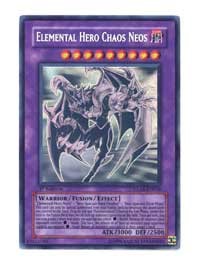 The second-ever Ghost Rare printed in the TCG comes with a price tag befitting its rarity, and at $270 it's a top pick for Elemental HERO collectors. As far as competitiveness goes, well, it's hard enough to get the requisite Fusion Materials for Elemental HERO Chaos Neos on the field in the first place, let alone nailing all three coin flips to make your investment worthwhile, but that's not really why people chase it. Elemental HERO Chaos Neos is an icon of the GX era, and a crown jewel for one of the biggest fan-favorite themes in the game.

#4 The Winged Dragon of Ra 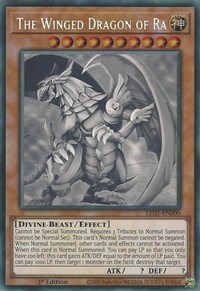 The TCG's newest Ghost Rare arrived last year when The Winged Dragon of Ra was reprinted in Legendary Duelists: Rage of Ra. At $280 it's a sign that the community will never sleep on the long term value of Ghost Rares ever again, and I think Ghosts from the Past is an acknowledgement from Konami that they understand the community's desire for more Ghosts.

The Winged Dragon of Ra (Ghost Rare) is a fantastic collector's card with basically no competitive role despite recent support, but you can't deny that this Ghost Rare looks truly Divine. 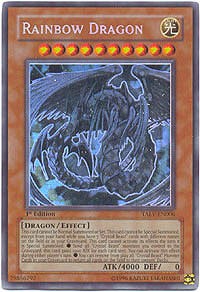 Crystal Beasts were never terribly competitive, although I've met a few duelists dedicated to perfecting them. The most recent support in Flames of Eternity and Legendary Duelists: Ancient Millennium are promising, but it's hard to reinvigorate a theme from 2007 with just a handful of new cards.

The GX anime and nostalgia are the biggest contributing factors to product-hover id="57794" $320 Ghost Rare print. Believe it or not, this isn't even the most expensive version of Rainbow Dragon. We'll touch on that in a bit. 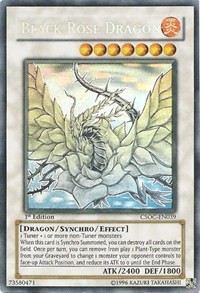 The second Signer Dragon, and perhaps the best-looking Ghost Rare in the game, product-hover id="28432" sits at an impressive $350 for the Unlimited Near Mint printing.

Black Rose Dragon was hardly the first board wipe in the game, but when it debuted in Crossroads of Chaos in 2008 it was easily the most accessible. I spent months summoning Black Rose Dragon with Debris Dragon and Lonefire Blossom or Dandylion to repeatedly nuke my opponent's boards, or flip their set monsters face-up by banishing a Plant from the graveyard.

Black Rose Dragon saw consistent play for years, and it was one of the most high demand reprints of the 5Ds era. Its current price tag is a testament to its power, its beautiful art, and the fandom's response to its wielder in the anime. 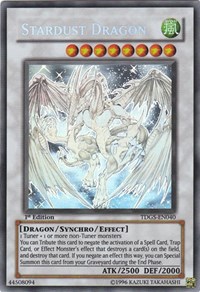 Stardust Dragon (Ghost) was the fourth Ghost Rare ever printed, and the first Ghost of the 5Ds era. It's Yusei Fudo's signature card, the main character of Yu-Gi-Oh! 5Ds, and it's spawned a dozen upgraded versions like Shooting Quasar Dragon, Shooting Star Dragon, Majestic Star Dragon, and even the upcoming Shooting Star Majestic Dragon.

Stardust Dragon saw significant play from 2008 to 2011, when Xyz Monsters took over. I must have summoned it hundreds of times in my Dragunity deck, and whenever I think back to Yu-Gi-Oh from ten years ago I immediately associate that period with Synchros like Stardust Dragon, Black Rose Dragon, and Brionac, Dragon of the Ice Barrier.

So what's up with Stardust Dragon (Ghost) $500 price tag? I think it's obvious: people love this card. 5Ds had a strangely mature setting with slightly older characters than other Yu-Gi-Oh anime, and I think Synchros did a better job of capturing the sort of Yu-Gi-Oh power fantasy of controlling a huge high-ATK boss monster, more than any other Extra Deck mechanic since. Stardust Dragon isn't as iconic as Blue-Eyes White Dragon, Red-Eyes Black Dragon, or Dark Magician, but it's impressively close, especially if you started playing the game around 2010.

There are two 'common' Ghost Rare misprints that may be even more valuable than Stardust Dragon (Ghost). Elemental HERO Chaos Neos prints in Gladiator's Assault were sometimes printed Elemental Hero Chaos Neos (Misprint) Misprint copies don't come up often, but when they do appear in collector circles, they regularly sell for over $600, outpacing Stardust Dragon (Ghost). Because the supply's incredibly low it's almost impossible to know their exact value. 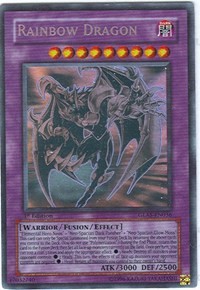 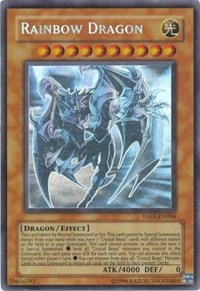 Meanwhile, there's a print of Rainbow Dragon from Tactical Evolution that has Rainbow Dragon (Chaos Neos Misprint) The Rainbow Dragon misprint is potentially even more valuable, but there are no realistic listings for it currently.

Ghost Rares are clearly much more of a collector's item now than they were a decade ago, and I think that's true for all of Yu-Gi-Oh. Collectors are willing to spend more these days, and demand is significantly higher for unique versions of cards. Starlight Rares have shown us that duel fans are willing to invest hundreds of dollars on the secondary market, or crack cases of product just to get their hands on the highest possible rarity of their cards. That said, I'm a much bigger fan of the design of Ghost Rares, and I'm still hoping that we'll see them return to core sets someday.