I don't think anyone expected Mardu Vehicles to be so dominant at Pro Tour Aether Revolt, at least I didn't. Mardu Vehicles is a deck that I did test before the tournament, but chose not to play since there are definitely certain cards that are tough for that deck to beat. Mardu Vehicles is far from the only deck in Standard right now, though it was clearly a good metagame call last weekend. Personally, I played Black-Green Energy, and went 7-3 in Constructed with that, so I can confidently say there are other decks that can compete in this format.

Aether Meltdown is a card that gets very easily overlooked in Standard, but I'm not really sure why. There is a good argument for it being better than a staple removal spell like Harnessed Lightning against Mardu Vehicles. Aether Meltdown works well in decks that have some ways to use the energy it generates. The creature it enchants isn't removed from play, but in some cases that is a good thing. Think about this card on a Scrapheap Scrounger.

Aether Meltdown is good enough to be a main deck card right now in energy-based decks, or a sideboard option for typical control strategies. The only major downside when compared with other cheap removal spells is that this isn't a card that can break up the Copycat Combo. Those decks are on the decline right now though, so that might be alright.

The argument against Kalitas, Traitor of Ghet is that it can die to one spot removal spell, and if that happens it has just traded one for one with one of the opponent's cards. For a four-mana play in Standard, ideally you want to get some value from the creature even if it immediately dies. However, if Kalitas, Traitor of Ghet stays in play for a couple turns it can very easily take control of the game by itself.

This card is perfect in the Blue-Black Control decks that have been popping up, and play a ton of removal. Mardu Vehicles essentially needs to immediately have Unlicensed Disintegration for Kalitas, Traitor of Ghet in order to deal with it. Let's also not forget about the fact that there are Zombie decks still running around, which can't possibly beat a Kalitas, Traitor of Ghet if it stays in play.

After looking through the various Mardu Vehicles lists from Pro Tour Aether Revolt, many of the big teams opted not to play Skysovereign, Consul Flagship in their sideboards. This is a card I expect almost every Mardu Vehicles player to start playing a copy or two of moving forward. We saw how dominant the card can be in the hands of Pro Tour winner Lucas Esper Berthoud. Outside of Mardu Vehicles, there are other decks that can play this card as well. Five mana is when a deck really wants to make a huge game-changing play, and Skysovereign, Consul Flagship is one. But be careful playing too many, because there is such a thing as too many vehicles and five-drops. 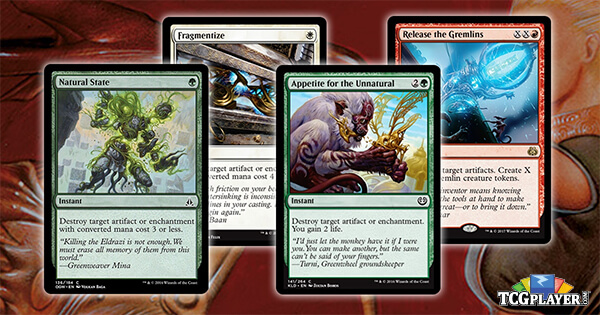 You are going to see a trend here, play more artifact removal! The best decks in Standard have artifacts in them, and artifacts are some of the most powerful cards in Standard. Even decks without many artifacts have Gearhulks that need to be dealt with. I am clumping these artifact removal spells together because they fill mostly the same role. Release the Gremlins is starting to see a ton more play, but the other cards here still are being sidelined. There were plenty of players who decided to not have any artifact removal in their sideboard at the Pro Tour, and they paid the price.

There are decks in the format with very fragile mana bases, so destroying an artifact could potentially stop a Spire of Industry or Toolcraft Exemplar from working to its full extent. We are talking about more than a one-for-one trade, when you see it from that perspective. In order to fight a deck like Mardu Vehicles you need spells that are very mana efficient, and these cards fit the bill there. Every deck in Standard needs to have some artifact removal in their 75.

After testing extensively for the Pro Tour, Dynavolt Tower is a card that my team (Team Genesis), highlighted as one of the most important tools for control decks in the format. The Jeskai Saheeli deck is not a pure control deck because it incorporates the combo, but then there are also the straight control decks that need the lat-game inevitability. I have seen control decks lose on turn 20 because they plan to win only with Torrential Gearhulk and gaining advantage with Glimmer of Genius, only to have that plan not work out. With a Dynavolt Tower in play for a couple turns, the control player can create an overwhelming advantage fairly easily.

Being able to go to the opponents face also means Dynavolt Tower can attack planeswalkers. It's a card that can stop the Saheeli combo, so if you want to tap out main phase against Jeskai Saheeli that is normally okay with a Dynavolt Tower in play. I expect straight control decks to almost universally play Dynavolt Tower moving forward.

There were a handful of old school delirium decks with Liliana, the Last Hope and Ishkanah, Grafwidow, but not many. The absence of Emrakul, the Promised End hurts, but it turns out that this type of strategy is still strong against Vehicles decks. Outside of those decks, I would like to see other color combinations explored, like say White-Black Control? We really haven't seen enough of these types of decks. With premium removal spells like Fatal Push and Grasp of Darkness there are ways to give these super aggressive decks a fit.

Martin Juza helped show the world the power of this card. To be honest when I first saw Greenbelt Rampager, it didn't seem that impressive. But now this creature stands out in decks that look to abuse energy synergies. This is a creature that matches up favorably against Scrapheap Scrounger, which is not something many other cheap creatures in Standard can say. Alongside a Longtusk Cub, you can continuously return the Greenbelt Rampager and use the energy gained to pump the Longtusk Cub. Greenbelt Rampager is a card we should expect to see much more of.

Remember when I talked about artifact removal? Well, here I am doing it again! I decided to give Natural Obsolescence its own slot on the top 10 list, because it really is that good right now. I came to the Pro Tour packing Appetite of the Unnatural, and looking back wish I had played Natural Obsolescence instead. This card does way more than kill a Scrapheap Scrounger – it removes it from play permanently so that it won't come back!

Having an instant-speed removal spell that is cheap and perfectly answers Scrapheap Scrounger is why I believe decks that can play Natural Obsolescence should.

There aren't too many cheap cards with lifelink, and this is one of them. Simply using the two energy Aethersphere Harvester creates itself to give it lifelink will usually provide enough of a life buffer. Loading Aethershere Harvester up with counters from a Verdurous Gearhulk is another way to make a huge lifelinker that will swing the game immediately. Aethersphere Harvester is a card that any deck with a reasonable amount of creatures should consider playing.