Chilling Reign marks the cardboard debut of several Pokémon from The Crown Tundra DLC of the Sword & Shield video game, including Calyrex and the Galarian versions of Kanto's three legendary birds. That's exciting enough, but the set also includes rare versions of Generation I favorites like Snorlax and Rapidash which just happen to be really competitive cards. The three biggest factors that control a Pokémon card's price are its rarity, whether it features an iconic Pokémon, and whether it's a viable game piece. It's exciting to see so many cards from this set check all three of those boxes.

Thanks to presale figures, we have a good idea of which cards from Chilling Reign are worth serious money. As you break open booster packs this weekend, keep your eyes out for these Pokémon: 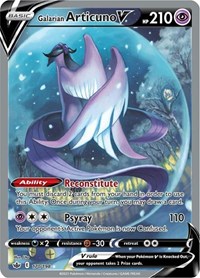 Normally, the later the generation a Pokémon comes from, the less recognizable that Pokémon is and the less it will be worth as a card. The Galarian legendary birds break that simple guideline. Are millennials who grew up playing Red & Blue going to think of Galarian Articuno as an all-new Pokémon, or as a new version of the legendary bird they spent countless Great Balls trying to capture back in 1998?

Probably the latter, if this card's price is any indication. Besides appealing to old fans and being ultra rare, Galarian Articuno V's Reconstitute ability works great in Mad Party, a rogue Standard deck with some competitive credentials and a lot of fans. Check, check, check. 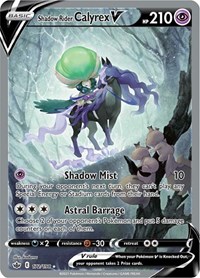 It's a beautiful card that evolves into Shadow Rider Calyrex VMAX. Speaking of which... 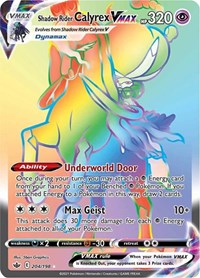 Shadow Rider Calyrex is obviously one of the two "face" cards of Chilling Reign, but its VMAX form has also caught the attention of competitive players. Two of the strongest things you can do in the Pokémon TCG are accelerate your energy and draw cards, and this Calyrex does both every turn as an ability. To top it off, its Max Geist attack deals an unlimited amount of damage and has drawn positive comparisons to Eternatus VMAX (swsh3-117), one of the strongest attackers in Standard. 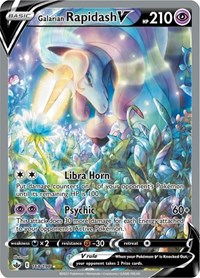 Those flowers glitter like jewels, and Galarian Rapidash has the beautifully swirly mane of a My Little Pony. Any card with that art was always going to make this Top 10 list, easy.

Galarian Rapidash V is a reimagining of a Gen I Pokémon that also happens to be really competitive. Libra Horn sets up even the biggest Pokémon VMAX for a Knock Out the following turn, and since it costs colorless energy, Galarian Rapidash V can slot into any deck.

At time of writing, a copy of Galarian Rapidash has sold for $149.99, but other copies are not selling at just $44.01. There's a good chance the card is currently overvalued, but I'm confident it's still going to end up being one of Chilling Reign's big draws. I refer you again to that mane. 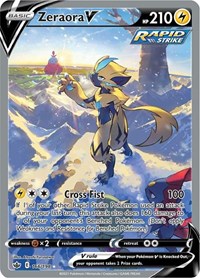 Zeraora didn't join Pokémon canon until Generation VII, but it's hard not to love a cute anthropomorphic fox, especially when there's a lens flare behind them. This is the first Zeraora card where the Pokémon looks so serene, and that's going to appeal to a lot of players who fell in love with this Mythical furball in Sun & Moon. 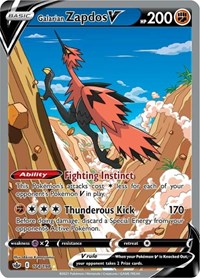 Roadrunner Pokémon go brrrrrrrrrrr. The Fighting Instincts ability is going to absolutely hose some decks, especially once Pokémon-GX rotate out in September and Pokémon V become the only multi-prize game in town. 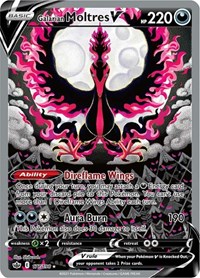 Besides being really, really cool, the minimal color palette in the art actually makes it ambiguous whether this Moltres is fuschia or just "tinted" that way, which makes it even more recognizable by folks who dropped off in Gen II.

This card is old and new and gorgeous and rare. If that weren't enough, its Direflame Wings ability works perfectly in the Eternatus VMAX deck I mentioned earlier. That's the recipe for a high-value Pokémon card. 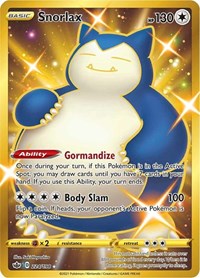 The Snorlax (swsh4-131) released last year in Vivid Voltage and is currently $2.94. But then, that version isn't surrounded by sparkly gold lights. We don't know exactly what the pull rate will be for secret rares in Chilling Reign, so we'll have to see whether Snorlax can maintain its current Market Price of $130.69 (at time of writing). 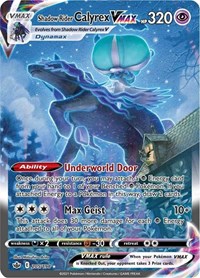 That art… c'mon. This was always going to be a centerpiece of Chilling Reign. I'm more surprised there's still one card left to go in this list.

Blaziken was the Generation III Fire starter, so we've seen this Pokémon before—but never like this. Shigenori Negishi's take on Blaziken tells a story with contrasting art styles. I expect fans to be divided on this hyper-cartoony illustration, but it's going to be somebody's jam, and that person is going to have a hard time pulling this card on their own.