They say a picture's worth a thousand words. What about 1743?

"I try to avoid actually playing Magic as much as possible." -Patrick Chapin

I was watching my good friend and podcast partner Patrick Chapin play on Day 2 of last week's Pro Tour Battle for Zendikar. Patrick played a lot of interesting games on the way to a great Top 16 finish, but I don't think anything I saw was more impressive than just his typical board setup in a typical game of Limited: 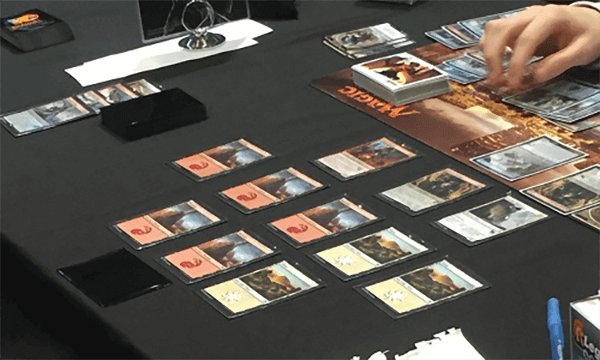 The way Patrick lined up his board was itself a testament to superior Magic technology!

My favorite topic to write about in terms of Magic: The Gathering is any topic by which the average player can improve his or her play, and therefore chances to win, in tournaments. I thought that there was a ton any of us could learn just by looking at this Pro Tour Champion and Pro Tour Hall of Famer's side of the table.

Here are four pretty telling things you can take away by studying The Innovator's layout:

We've talked about this before (though our example was Satyr Wayfinder not a basic land). Playing all cards with the same picture is one of the easiest ways to minimize your chances of giving away games at a very low cost. If the opponent sees your hand somehow (say a Duress, Despise, or Transgress the Mind) and takes note of a basic land, you will leak your likelihood of winning if you draw a different land, with a different picture, and play it. Many PTQs have been lost this way just because the opponent can predict when the coast is clear! Playing with all the same pictures will also prevent you from accidentally giving away information with a card like Slab Hammer

In any of these situations, all other things held equal, you should play a land that the opponent saw; if all your lands have the same picture (as Patrick did with his Mountains and Plains) you can't inadvertently make a mistake! At the very least, you will have to think a little bit less hard, and will therefore have more in the tank to make the best in-game decisions you can.

You might have been puzzled at Patrick's quote from up top. He likes "playing Magic" more than anyone! Why would he want to play Magic as little as possible?

The reason is in what he means. It's not that Patrick doesn't want to play, it's that he doesn't want to exert more in-game / in-moment mental energy than is necessary. In this case it means setting up a system whereby his cards will largely "play themselves" so he doesn't have to expend valuable brainpower making small decisions like which of two available, if functionally identical, cards to play.

It is a small note, but relevant here: Many players know to choose all lands of the same art when constructing sixty-card decks. After all, they do so at home, with access to their full collections much of the time; Patrick took the time to go to the land box and get all the same pictures, probably some time before the start of the Draft, because he knew that that would maximize his chances of winning (and reinforce good habits) even if his opponents didn't play Transgress the Mind.

Look at how Patrick's lands are actually laid out; look at his pattern. It's not just that his lands all have the same pictures, but it's that he has his lands laid out by color, and in chunks of useful mana costs: one, two, three, and eight.

Look at the cards that Patrick has in play, and even in his graveyard.

The most important permanent on Patrick's side of the table is probably this guy:

Valakut Invoker has the ability to deal three damage to target creature or player. You'll note that Patrick has laid out his lands so that he can explicitly see eight untapped lands. His lands aren't overlapping so that he has to sort and count them if he wants to make an expensive play, or string together multiple plays. It might seem like a small thing, but this minimizes his chances of forgetting to use the Valakut Invoker's ability at an opportune moment.

I think players generally discount the concept of making small mistakes. "I'd never do that," they kid themselves; but how many of us can claim to play a perfect game, let alone a perfect tournament? We all kick ourselves -- at some point -- for missing a point, ordering blockers in the wrong order, or making some other seemingly minor mental slip. Most forget about these errors in all the cases except the ones where they obviously cost the game (but refuse to take corrective action even when that happens). When Patrick lays his lands out in a pattern like this, his goal is to invoke what he calls "the A.I." His schema is designed in recognition of possible plays like this one; the A.I. doesn't often engineer the wildly camera-friendly plays, but it can prevent the problems that few players recognize are even occurring. That's what's so great about it: You don't have to worry about it because the machine has already got you covered. You can save your mental energy for your wildly camera-friendly plays, etc.!

There is a second important three mana red card on Patrick's side of the table:

It's hard to see clearly (even expanded like so) but that is the mighty Radiant Flames! In a two color deck, Radiant Flames is most likely to deal two damage. Depending on how Patrick hit his colors -- anything but RRR -- he would have done two damage. For most of the early game, Patrick had a 2/3 creature (the Valakut Invoker) and his opponent had mostly one toughness creatures.

While he never actually took the option, Patrick played very patiently for many turns, seeing if he could actually get an extra creature by attacking and dealing only one damage to lots of creatures (which would have allowed an attacking Valakut Invoker to live through the Radiant Flames when a two damage one wouldn't).

Again, the ability to make the right plays, find the most relevant options, or even see them to begin with, are not contingent on laying out your lands as methodically as Patrick does; but teaching yourself these kinds of habits does make it easier to avoid brain farts.

What does Kitesail Scout have to do with anything?

There isn't even a Kitesail Scout in this picture! 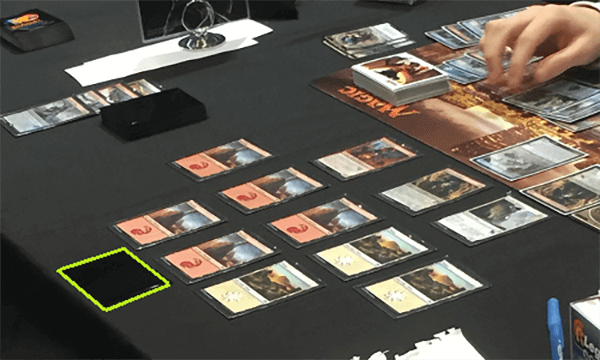 Believe it or not, that's a Kitesail Scout.

And over on the other side? That's a Murk Strider.

When LSV said that friends don't let friends play Kitesail Scout, he probably wasn't envisioning how his friend and co-worker would utilize it.

So what's it doing back in Patrick's hand?

The obvious answer is that Murk Strider was used to bounce Kitesail Scout back home. That, for one, is saying something. Murk Strider is typically a top-half-of-the-pack pick, sometimes as high as first. What could possess a competent mage to use Murk Strider on a relatively weakling like Kitesail Scout?

It was already neutralizing a first pick.

Patrick saw multiple Eldrazi Skyspawners in game one. Eldrazi Skyspawner is a 2/1 flyer for three mana that makes an extra 1/1 body. It's 3/2 over two bodies, evasion, and acceleration in a tiny, tidy, package. It will very commonly go super high (as high as first).

Note that Kitesail Scout isn't nearly as good a card as Eldrazi Skyspawner, but it does an absolutely smashing job of getting in one's way. While it doesn't do anything about the 1/1 Eldrazi Scion token, Patrick has something else (or two) for that.

I was pretty surprised going into the Milwaukee Draft prep meetings because I had done most of my practice on MTGO before that.

Fortified Rampart routinely went fourteenth pick in early MTGO drafts, but it turns out the little 0/6 does a pretty good Doom Blade impression. It can hold off all kinds of awesome high picks on the ground -- again neutralizing much higher tier picks -- or, as in the case of this battlefield position, make attacks in general complicated and generally undesirable.

Getting better at Magic is like getting better at anything. It's not unlike taking a karate class or hiring a personal trainer. You watch what somebody good at something does, in some ways try to approximate how someone who is good at something thinks about that thing, and then eventually, if you put in some effort, maybe you can do the same kinds of things yourself. The best players making the best plays aren't always the fanciest or most exciting; I think what they tend to do best is simply to avoid the errors that us mortals commit too often. The A.I. is Patrick's technology to prevent common errors. Now that you've seen it, maybe you can successfully ape some of it yourself.

I'll leave you with a sentiment from a different Pro Tour Champion, Tom Martell:

"People want to see the $16,000 Lightning Helix. That is what they want to see. Often, even the good commentators miss the really genius play.

"People don't see the really genius plays because they're so subtle."

...you know, like having a face down Kitesail Scout back in your hand.