The new banlist dropped Thursday, and it goes into effect Tuesday of this week. As usual, the question on everyone's mind is: what's the best deck to play in the new format? Or better yet, what are the best cards to build your deck around?

I've looked at the changes, and they're great because they took away some of the really stupid broken tools from the best combo decks! But at the same time, the list isn't perfect from a strict view of competitive balance, because it didn't make the other really strong decks any weaker. To me that's okay: there's always going to be a top deck or two, setting the pace for the format and playing the role of gatekeeper. As long as those tops decks are beatable, then I believe it can be a fun format.

Inevitably, those decks will come to define the shape of competition, and once the format's crystallized and those decks are more popular than others, the tables will turn in a week or two once people figure out how to tackle those strategies. 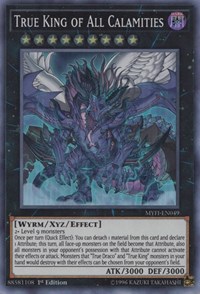 So Let's Establish What Didn't Change

For starters, Virtual World still has True King of All Calamities. The Virtual World deck's lost nothing, so it'll still be a top contender with huge consistency and a strong resource game.

While everyone complains about Virtual Worlds or "Calamities Turbo," people seem to forget about Numeron Network, a 1-card combo that summons all the materials you need for Number S0: Utopic ZEXAL. It's a very easy package to splash around into other decks that run trap cards, stuff like Eldlich or even Paleozoic. Or you can combo it with another engine that doesn't conflict with Numeron's conditions, such as Subterrors with The Hidden City, or Generaiders with Generaider Boss Stage.

Number S0: Utopic ZEXAL and True King of All Calamities are probably going to be some of the biggest threats stopping you from playing Yu-Gi-Oh in the incoming format. Both cards shut down decks that rely on monster effects to win, while Number S0: Utopic ZEXAL can also stop powerful spells and traps. From that angle, maybe trap cards are a better choice; they don't mind lockdown effects on your turn, because they can help you play on your opponent's turn.

I know a lot of my friends have been talking about how good Eldlich is now. Even before the new list, setting five traps was sometimes good enough, even when you were up against combo decks going second. Generic cards like Solemn Strike, Ice Dragon's Prison, Torrential Tribute and even Needle Ceiling are all just very good at taking away resources from your opponent.

Stuff like Eldlich the Golden Lord and the Eldlich support cards offer higher value as the game gets longer, since a combination of Eldlixir of Scarlet Sanguine and any of the Golden Land traps will just loop each other every turn. That doesn't go on forever, since you only have so many traps, but having three or four turns' worth of resources puts you in a winning position in lots of matchups, since many decks run out of steam after two or three turns. It's a big difference.

If you take a look at the Eldlich Zoodiac decks that top players like Ryan Levine and Esala Wathuthantrige played at the November Yu-Gi-Oh! Extravaganza event, it's clear that the synergy is there. That strategy's effectively a 1-card combo engine that doesn't lose much value to versatile decks packing lots of hand traps. With a resilient trap engine that continuously takes away cards from your opponent, and maintaining value for three to four turns, it's deadly and consistent.

The only times I've managed to beat those kinds of decks while playing Dinosaurs, were times when my hands were extremely optimal and could generate more plays than the Eldlich player could stop. But that can only happen so often in any given tournament. It's very clear that the difference in consistency makes Eldlich a hard matchup, since Dinosaurs already struggle against generic traps. The searchable graveyard removal of Huaquero of the Golden Land can also be a problem. Not even Miscellaneousaurus can help in a matchup like that. 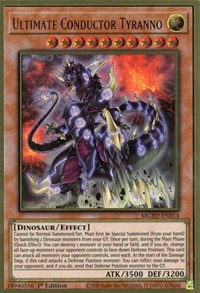 So Are Dinosaurs Still Good?

I still think Dinosaurs are a strong contender, but like usual, it can't be the best deck. Especially if more players lean toward trap cards rather than building a field of monsters.

Miscellaneousaurus and Ultimate Conductor Tyranno aren't very good when they're up against a field of face-down trap cards. But the combo variant with Crystron Halqifibrax still exists and it could be the way to go if player's don't respect Crystron Halqifibrax. If they underestimate how easy it is for Dinosaurs to make Crystron Halqifibrax alongside an Evolzar Dolkka, they're gonna be in for a big surprise.

The loss of Linkross means you can't abuse those classic combos that let you put up an early Herald of the Arc Light before summoning Crystron Halqifibrax. That makes Crystron Halqifibrax more susceptible to negation from hand traps, which could potentially end a lot of turns for combo players.

Dragon Link can still play through it by summoning two more Dragons and using Guardragon Elpy for a different combo route. But Infernobles will struggle a bit more, because their routine combos relied heavily on Mecha Phantom Beast Auroradon. And let me tell you, it's pretty hard for a Warrior deck to put up three Machines without Crystron Halqifibrax and Deskbot 001.

So for now, until someone figures out how combo decks should adapt, I don't believe that they can be called the "best" deck just yet. But they'll still be a factor in competition; there will still be combos that end on multiple negations or a True King of all Calamities, So I'd still respect combo decks and play hand traps to keep them under control. Remember, even when Linkross got negated, many players were still able to combo off anyways.

Now, instead of playing through a negation on Linkross, they just have to play without it, which isn't too difficult. The loss of Linkross and the combos surrounding it also frees up some space in the Extra Deck, since you'll no longer play Herald of the Arc Light or Martial Metal Marcher either. Combo decks definitely still have some paths forward.

How About Genesis Impact?

Genesis Impact arrives on Friday, and let me tell you, Drytrons and Live☆Twins are very strong contenders.

Me and my play group have been looking into Drytrons over the past few weeks and even though Linkross was a big part of the strategy, the deck can still adapt. It can take advantage of cards like Herald of Perfection, search and summon Vanity's Ruler, make True King of All Calamities through Mecha Phantom Beast Auroradon combos or even make gimmicky plays like skipping your opponent's turn. I'll have a more detailed article about that later this week.

Live☆Twins are another theme I've been looking at and they remind me a lot of Zoodiacs. They offer a very nice 1-card combo engine that can grant you a free draw and often pop an opposing card. But if you compare them to modern day Zoodiacs, they're more vulnerable to hand traps and don't have plays that are on quite the same level as summoning a Divine Arsenal AA-ZEUS - Sky Thunder. But I still think we'll still see lots of Live☆Twins in tournament play, whether it's a standalone deck, or just a supporting engine.

There are definitely a TON of other very strong and viable decks, engines, and packages too. Expect to see more Red-Eyes Dark Dragoon, Red-Eyes Fusion, and Predaplant Verte Anaconda. Dogmatika cards are still going to be big in control decks like Invoked, Subterrors or Eldlich. Buster Blader cards, mainly Prologue of the Destruction Swordsman comboed with Destruction Sword Memories to summon out the soft lock of Buster Dragon and Buster Blader, the Dragon Destroyer Swordsman. Those cards will probably win a lot of tournaments.

Then there are the rogue strategies that shine every now and then, because they can be good if the stars align just right. Those types of decks are usually lacking something essential to greater, most consistent success, but you can't underestimate them when they appear. Madolches have powerful 1-card combos and amazing boards when their plays are fully resolved. Prank-Kids play to a very similar philosophy, being another 1-card combo deck with many starters.

There are just so many of these high potential decks that I can't count them all. ABC's got their third ABC-Dragon Buster back. Dragonmaids are pretty cool with all their amazing recursion. Mermails can still do Water combos with Moulinglacia the Elemental Lord. Gren Maju Da Eiza and Heroes are still consistently aggressive. Salamangreat….is a deck. Heck, even Melffys can probably win a local.

Overall, I'm pretty excited about the new banlist! I'm looking forward to not getting my hand ripped apart by Smoke Grenade of the Thief, or locked out by Dragon Buster Destruction Sword. I'm probably not alone! Hopefully the next few weeks feel fresh, and a little less oppressive than the last format.