Every year there are hundreds of new cards debuting in the global Yu-Gi-Oh TCG, but only a small percentage of those cards hit the TCG first before an Asian OCG release.

This week we're taking another look at cards that made their first debut in the TCG–some of which ended up being among the most influential cards in Yu-Gi-Oh history. 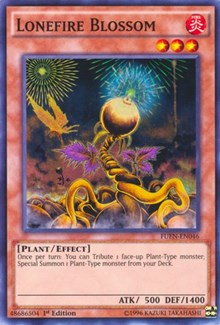 Phantom Darkness was an absolutely insane core set that introduced an absurd number of game-defining cards. Lonefire Blossom made its debut in the TCG version of the set alongside Gigaplant, but it was largely overshadowed at launch by cards like The Dark Creator, Dark Armed Dragon, Super Polymerization, Goblin Zombie, Armaggeddon Knight, Cyber Valley, Prime Material Dragon, and the next two World Premieres we'll be looking at.

Lonefire Blossom would go on to fuel dozens of competitive strategies over the next four years, and it remains a staple for most Plant strategies. From Debris Princess in 2009 to Quickdraw Dandywarrior, and all the way through Plant Synchro, Lonefire Blossom an inseparable part of the once-great Plant engine. 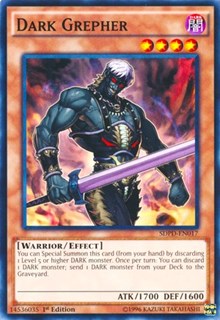 Another pick from Phantom Darkness, Dark Grepher helped fuel the graveyard-dependent Dark strategies that were being introduced in the same set. Dark Grepher also played a huge role in Infernity, and more recently in Orcusts. Between Armageddon Knight and Dark Grepher there are so many more ways to get Dark monsters in the graveyard compared to every other Attribute–or, at least, there were. Both monsters are currently Limited thanks to the overwhelming success of Orcusts. 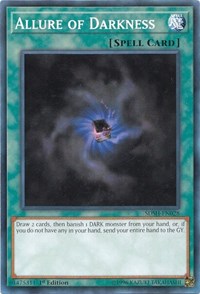 The Dark support in Phantom Darkness was a little overwhelming, and the World premiere cards were especially strong. Allure of Darkness was, and is, an incredible draw spell that fits easily into virtually every Dark theme in the game. It debuted at a time when Dimension Fusion and Return from the Different Dimension were legal, landed on the F&L List shortly after the TeleDAD era, and continued to be a staple in various Dark strategies more than a decade later.

Charge of the Light Brigade 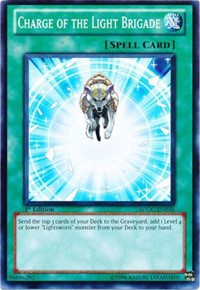 Alternatively, you could search Lyla, Lightsworn Sorceress to destroy a backrow card, or Ehren, Lightsworn Monk to kick a set monster back to the deck. You could even get whichever Lightsworn name you were missing to make Judgment Dragon live. Unfortunately, The Duelist Genesis also brought TeleDAD into the world, and virtually nothing else could compete for a solid six months. 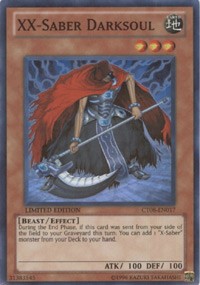 At one point in Yu-Gi-Oh's history X-Sabers were the deck to beat. Their excellent Main Deck line-up was massively boosted by a handful of World Premiere cards, including XX-Saber Boggart Knight, XX-Saber Emmersblade, and XX-Saber Darksoul.

XX-Saber Darksoul in particular helped X-Sabers achieve absurd card advantage thanks to a favorable, and now defunct, ruling. Previously, XX-Saber Darksoul effect would let you search your deck for an X-Saber every time it was sent to the graveyard. You'd see players searching three or more cards in their End Phase. The difference between the OCG and TCG versions of X-Sabers at that time couldn't be more obvious; it was an unusual example of the TCG over-supporting an existing theme from the OCG. 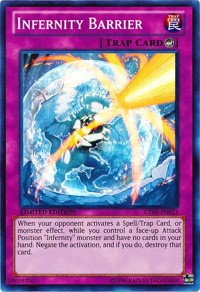 Infernity was a gimmicky yet explosive strategy that became a competitive hit with The Shining Darkness in 2010. While OCG builds could drop three copies of Trishula, Dragon of the Ice Barrier in a single turn, the TCG took the deck in a different direction by premiering a new Counter Trap: Infernity Barrier.

With Infernity Barrier in the deck the Infernity strategy shifted away from a hand loop and into a 'break my board' control strategy. It was an exceptionally powerful piece of support for a deck that didn't have its best Synchros yet, and wouldn't for another year. By that time Infernity Archfiend and Infernity Launcher would be Limited, and nobody was trying to make Infernity work with so many restrictions in place.

Droll & Lock Bird wasn't an immediate hit in the TCG when it debuted in Starstrike Blast in 2010, but that changed as the number of searches per turn ticked up over the years. Since its release, we've seen Droll & Lock Bird at every level of competitive play, and sometimes it's the most played hand trap in a given era. I'm still surprised that its interactions with cards like Trickstar Reincarnation remain legal, having the potential to steal your opponent's entire hand. It's probably the closest thing we have to a replacement for Ash Blossom & Joyous Spring should Ash Blossom ever land on the F&L List. 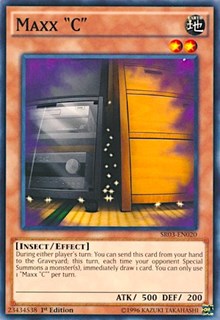 Can you believe that Maxx "C" debuted in the TCG? Today the exact opposite is true: Maxx "C" is Unlimited in the OCG even as it remains Forbidden here. Any online discussion about whether Maxx "C" is healthy for the game or not eventually reveals the truth about this hand trap: it's unquestionably one of the most powerful cards in the game.

Maxx "C" won't stop your opponent from committing to a play and wiping out your Life Points–usually–but it still has as much stopping power as a Nibiru, the Primal Being or an Evenly Matched. There are few cards more format defining than Maxx "C", and it's still one of the most important differences between the TCG and OCG's competitive scenes. 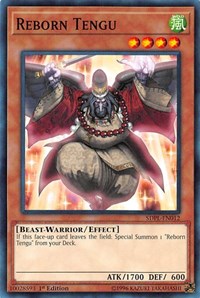 Destiny HERO - Malicious had an unintended interaction with Synchros that made it one of the first cards to be abused when that mechanic launched in 2008. But Reborn Tengu–released at the very end of the 5Ds era–effectively reintroduced that concept of a recurring, abusable non-Tuner without needing a discard outlet.

Reborn Tengu immediately boosted Plant Synchro to a new peak in power thanks to existing double-use Tuners like Glow-Up Bulb and Spore. Oh, and Pot of Avarice existed at the same time. Reborn Tengu was an instant problem in 2011, but it's relatively tame now given all the free resources that most engines have access to.

Tour Guide From The Underworld 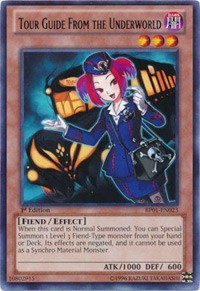 There was a brief moment where Tour Guide From the Underworld was ostensibly the most desired card in the game–if not objectively the single best card in Yu-Gi-Oh.

Sangan was already a widely-played Limited card in decks like Plant Synchro, and Tour Guide From the Underworld was ultimately more copies of Sangan and a +1 and a Synchro material itself. After Xyz Monsters were introduced there was a new world of applications for it. A lot of the hype around Tour Guide From the Underworld has died off over the years as more avenues to Rank 3s emerged, and Sangan stint on the Forbidden List, as well as its errata, didn't help. 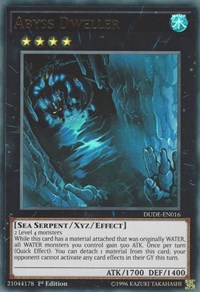 Among the best Xyz in the game, Abyss Dweller was in fact a World Premiere that debuted first in the TCG. Its outstanding quick effect floodgate made it a staple in every Rank 4-capable deck in the game, and it continues to see play in Xyz-focused strategies. It's still among the best Xyz Monsters to Side Deck, and it's a fantastic counter to the ever-increasing number of decks that rely on graveyard activations. 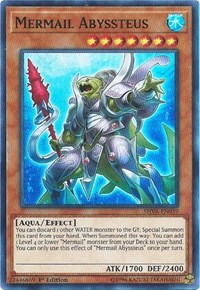 The search effect and additional discard outlet of Mermail Abyssteus helped to position Mermails for success, and Billy Brake and Jeff Jones innovated a build that let Brake take 3rd Place at the first YCS of 2013.

Water's long-term success would be negated by the introduction of Dragon Rulers and Spellbook of Judgment in Lord of the Tachyon Galaxy just a few months later, but for a while Mermail Abyssteus was the best World Premiere card in the game outside of Maxx "C". It delivered exactly what the Mermail-Atlantean deck needed right at a pivotal moment, and just a few months before an intense power creep would push Mermail out of competition.

It's absurdly powerful in the right setting, and it can definitely win games by voiding your opponent's entire turn, but it's also more tactical than Maxx "C" and nowhere near a staple hand trap.

Another anti-combo deck solution, Dark Ruler No More remains a fantastic budget alternative to Forbidden Droplet and one of the most played Side Deck cards in the game. It's a solid going-second pick that's hard to go wrong with unless your opponent has the perfect set-up.

Those set-ups aren't always realized in practice, so you'll frequently be staring down a board of negation effects that are exclusively attached to monsters. Dark Ruler No More isn't perfect for every match-up, but it's impossible to ignore just how much of an impact it's had on the competitive scene. 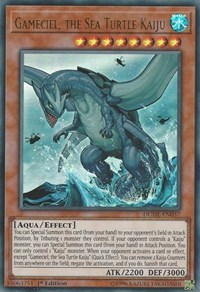 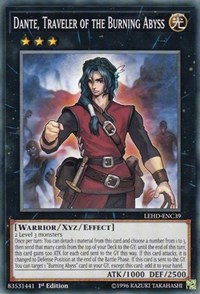 It's hard not to list every Kaiju or half of the Burning Abyss theme, but I'll go ahead and put an end to this list here. Konami's shift towards World Premiere themes instead of individual support or tech cards has removed some of the chaos that was so common in Yu-Gi-Oh from 2007 to 2014. In those days, a World Premiere could end up defining formats for six or more months at a time, and those cards were almost never touched by the F&L List until after their OCG debut.

The TCG and OCG have grown a lot closer together over the years despite our different F&L Lists and card pools, thanks in large part to slightly weaker World Premieres. Nibiru, the Primal Being and Dark Ruler No More are a departure from that perspective, and I can't help but wonder if there are more extremely powerful cards headed to the TCG first.