Commander 2016 is loaded with all sorts of delightful cards, but some are better than others. I intended to give you the best cards in the set, but after getting started, I put a limitation on my "Best of" list: only new cards. I've played with or against most of those cards. It was too difficult to balance the known against the unknown, so I'm just focusing on the new cards. I really wanted to warn you about some of the cards I think are particularly bad (Vial Smasher the Fierce) or are reprint gold you may not know about (Guiltfeeder), but there just isn't space to fit it all in. Maybe in the weeks to come.

I based what made my "Top 8" on power, coolness factor, and likelihood you'll see the card in multiple decks. That's right, my list is dangerously close to arbitrary. My Top 8 is also in order so even if you like my choices, you can still shake your head over my rankings! For now though, I get to be right and you get to complain about it in the comments or on Twitter. Enjoy!

Each of these cards is a seven-mana global reset with undaunted, the ability I consider the best in the set. Undaunted is an ability that makes cards cheaper in the early game, when you have less mana. In a four player game you are paying four mana to destroy all creatures or bounce all nonland permanents to their owners' hands. When the game gets towards the end, the card costs more, but you have more mana at that point too, and you are probably rid of bigger, more problematic permanents than you were at the start of the game.

(And I know, instant speed Cyclonic Rift is almost always better than Coastal Breach. Do you really want mass bounce spells to be better, or even as good as Cyclonic Rift?)

Not only does the mana cost change make sense, undaunted as an ability discourages players from targeting one player and driving them out of the game. I understand that this is often the best play strategically, but I've always preferred a game where everyone stays in the game and the life totals of the group shrink. I think that these games are more fun for everyone involved and undaunted encourages that style of play.

Mass removal is usually good, but with undaunted, it is undoubtedly great.

By the fifth turn of most games, I would guess my opponents usually have seven creatures. Sometimes they are running token decks and have 100 creatures, but seven seems about right. Four mana on turn five for a 10/10 and a +1/+1 counter for the two creatures I have in play seems like a particularly good deal for four mana.

I understand Primeval Protector has no evasion. My 10/10 will be blocked by 1/1 creatures all day long. It isn't exactly the card you want in your opening hand either, since the strength of the card lies in the discount. However, once you are five turns into the game, Primeval Protector becomes crazy.

Primeval Protector offers a massive body that finishes off the defenseless player. If you can provide a way to give it trample (something I expect any deck running Primeval Protector will have), you are going to town! It fulfills its name as protector, setting you up with a 10/10 blocker that crushes most creatures on the ground. On top of this, it is easy to forget that it is a great way to give a token deck a vicious boost. Tana, the Bloodsower's Saprolings just got a nice boost. Perhaps a blue creature further up the list could make Primeval Protector's +1/+1 counter boost twice as good?

Primeval Protector gives your deck a single massive creature and/or bigger small creatures. A creature deck that can go high and wide is a scary thing! It would fit well in a Commander deck with a commander that can move those counters to different creatures when some of them die...

So many decks get their creatures bigger using +1/+1 counters. Those decks tend to get victimized by removal spells. The creature with all the +1/+1 counters on it is killed, leaving you with a few other creatures, but you poured most of your assets into that one creature.

Picture Vulturous Zombie. Your zombie gets bigger and bigger and you attack and do some damage, then your opponent says enough and kills the zombie, leaving you short a creature and costing you six +1/+1 counters. Reyhan says, no problem. You move those counters to your Lotleth Troll and keep going.

You don't even need that many counters. A few Zombie Tokens, a couple of +1/+1 counters, Reyhan and Jarad, Golgari Lich Lord and things wrap up quickly. Sacrifice the zombie with the counters and your opponents lose four life. The tokens move to another zombie, and you repeat. Delightful!

And yes, putting +1/+1 counters on a creature is something Doubling Season and other cards like that love. Those zombies with Jarad? They cost your opponents four life, then six life, then 10 life. How much more life do they have left?

I've said all of this, and haven't even mentioned that Reyhan brings three +1/+1 counters and has partner!

(A quick note, my spellcheck corrected Yidris to Yiddish. I have no idea what a Yiddish Maelstrom would look like or how one would wield it).

When a 5/4 trampler gives a bonus when it deals combat damage to player, you know you are going to get that bonus far more often than you won't. When the bonus involves getting a free spell every time you cast a spell, you know things are going to get crazy. Yidris is the best of the four-color commanders and it really isn't close.

The only real problem with Yidris lies with it being four-color. Unlike every other card on this list, it will be rare for Yidris to be anything other than the commander. A four-color card can show up in five-color commander decks, but Yidris is definitely best in a deck that revolves around the Wielder's ability. You don't want a deck loaded with cards that are ineffective when you hit them with the cascade trigger. Given these limitations, Yidris sits at number four.

The Boros colors have been seen as getting the short shrift when it comes to commanders. The color pair only seems to get commanders that offer something in combat. Most players want something more than improving your combat odds, particularly in a format where tapping your creatures isn't necessarily a good thing. 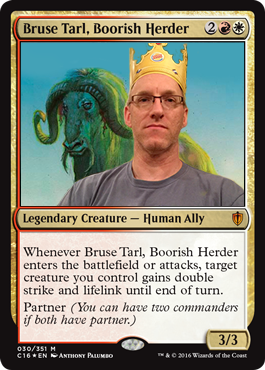 The handsome Bruse doesn't change this mode, but I think he brings it to a new level. I think Bruse and Rafiq of the Many are comparable. Both are Voltron-style commanders that can be used to pump other creatures when necessary. Bruse being forced to attack to offer his bonus to a creature is definitely a downside, but any deck that runs Bruse is going to be loaded with ways to protect him. I hope to see Bruse as a less broken version of Rafiq. I like the chance to see him offer his services to Gisela, Blade of Goldnight; Iroas, God of Victory; Tajic, Blade of Legion and the host of other Boros commanders.

I will likely partner Bruse Tarl with Tana, the Bloodsower. Giving Tana double strike and lifelink seems like a wonderful plan to me! Another option as a great partner for Bruse Tarl would be...

I think this is the best new two-color card in the set. I know that Ishai, Ojutai Dragonspeaker's ability doesn't really work with the flicker and bounce themes we often see in white-blue decks, Brago, King Eternal being a prime example. I know that Ishai doesn't have hexproof or shroud. I know that it isn't indestructible.

I don't care. Think about a typical four-player game: if you cast Ishai early, every opponent will be casting at least one spell on their turn. By the time it comes around to you, Ishai will already be a 4/4. In the later game with only two opponents left, they will likely be casting multiple spells per turn. I'd expect to see a 6/6 Ishai when my turn comes back around. Think how fast your Forgotten Ancient grows, and you're moving counters off it to other creatures! Your opponents will have one draw step to find an answer and they won't use it if you don't attack them, happy to see others falling by the wayside! Now add in double-strike and lifelink from a partnered Bruse Tarl and think how quickly you'll finish opponents with 21 commander damage!

The frailty of Ishai is overrated as well. White has plenty of ways to protect creatures from targeted spells at instant speed, while blue has a practically endless supply of spells to counter anything that would hurt Ishai. Even when that fails, you can put Ishai out again and see the counters move up quickly. All of this and we haven't even mentioned the equipment you could be running to protect Ishai.

When you add Gwafa Hazid, Profiteer as a way to prevent the flying creatures your opponents control from blocking, Ishai just looks better and better. A straightforward Azorius creature that slots nicely with Geist of St. Traft decks, I think Ishai, Ojutai Dragonspeaker is a monster! 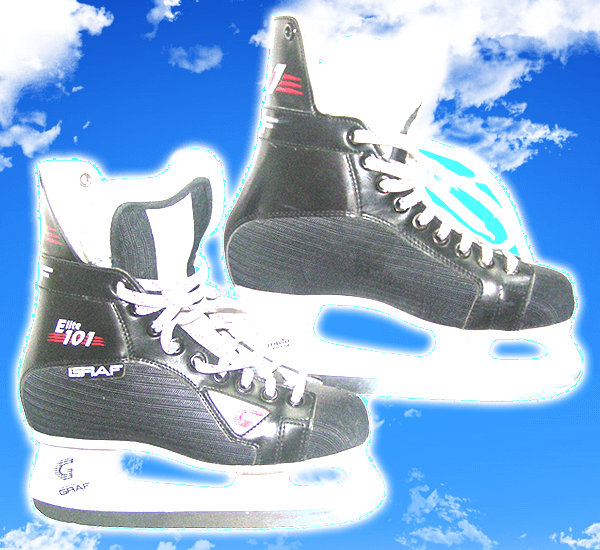 When a Magic card refers to skates, Canadians take notice. When a card says double counters, everyone else sits up and pay attention. When a card can double the number of counters on as many permanents as you want, you have the best card in the set.

Deepglow Skate is the best of all worlds. When it enters the battlefield, it doesn't double the counters on a single permanent, it can handle multiple permanents. It isn't just creatures, or just +1/+1 counters, or just your permanents. It targets whatever you want. If your opponents have a bunch of -1/-1 counters on creatures, you can make them pay. If they are running cards from Ice Age and have cumulative upkeep, you can double those counters while congratulating them on their hipster card selection! Primarily, Deepglow Skate doubles all the +1/+1 counters on your creatures, and doubles the loyalty counters on your Planeswalkers.

Part of the excitement about Deepglow Skate lies with the fact it is blue. Blue is the easiest color to flicker or bounce a permanent, meaning you'll be activating the ability multiple times per game. While the card is a complete cliché, Deadeye Navigator is a thing. Spending two mana to double all the counters on anything you like is delightfully broken. A planeswalker with two loyalty counters suddenly has eight loyalty counters when Deepglow Skate enters the battlefield twice in a turn.

I'd suggest decks for it to go in, but I'd certainly miss your favorite combination because there are so many options. It seems every color has cards that get some kind of counter, and Deepglow Skate works in all of them! I'll be putting my copy into my Vorel deck. Not the most broken option, but it promises to be plenty of fun!