There is a premier combo that will warp Standard, and it involves two cards: Saheeli Rai and Felidar Guardian. 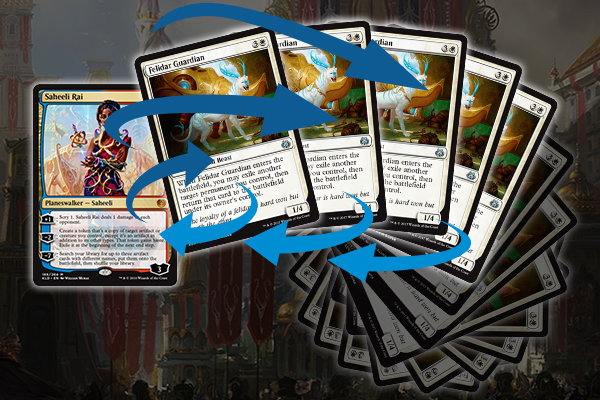 Most players are already aware these two cards together create a "Splinter Twin-Deceiver Exarch" combo, involving infinite Felidar Guardians with haste. The fact that Aether Revolt hasn't been released yet and this two-card combo has already gotten so much press should mean something. Saheeli Rai is worth six times what it was a couple weeks ago! Clearly this is a combo you should expect to see and play against in the new Standard format.

Wizards banning Reflector Mage definitely hurt this combo a bit, as Reflector Mage would be an instant four-of in any deck that has Saheeli Rai and Felidar Guardian. With that said, there are other cards that can be utilized for their comes-into-play triggers and there are going to be many different builds of decks revolving around "the combo." There will be control decks that control the game and then use the combination of Saheeli Rai and Felidar Guardian as the primary win condition; there will be decks that have a variety of threats so that there are plenty of different ways to win if the opponent can disrupt the combo.

I would like to start out with a Jeskai Control build reminiscent of Splinter Twin decks.

This type of control deck has a lot going for it. Most opponents are going to be forced to play threats on their turn, rather than leave mana available for what you might have. This means that even if the opponent has a removal spell in hand for Felidar Guardain, you may be able to maneuver around it, and find the opening to get both Saheeli Rai and Felidar Guardian into play at once. This deck wants to trade resources early, but if the opponent does curve out, you can still play Saheeli Rai into Felidar Guardian some amount of the time.

The deck plays a couple ways to make use of Felidar Guardian if Saheeli Rai is not around. Oath of Jace is naturally strong in a Superfriends deck, and this one has eight planeswalkers, which is plenty. The added value of Oath of Jace is that you can blink it with Felidar Guardian, and generate some additional value that way. The other creature in the main is Torrential Gearhulk, which shouldn't come as much of a surprise. Blinking Torrential Gearhulk with Felidar Guardian or making a copy of it with Saheeli Rai creates a ton of card advantage as well.

This deck will win some amount of games quickly on the back of Saheeli Rai and Felidar Guardian, but if the game goes long the Jeskai Control deck is even more advantaged. If the oppoenent gets off to a quick start it may not be possible to stick Saheeli Rai early, but holding it in hand can work to your advantage. Oftentimes the plan becomes a wait until you hit six mana and find both combo pieces. Then you can play Felidar Guardian blinking a land, and run out Saheeli Rai; this leaves no opportunity for the opponent to attack Saheeli Rai, or play any sorcery speed removal.

With all the card draw effects this deck is going to find the cards it needs very easily by the lategame. Anticipate, Glimmer of Genius and Oath of Jace do a great job not just drawing cards, but finding specific ones, including counters to protect the combo. The deck has a lot of play to it, and like most control decks if you don't get run over early, it is pretty easy to find an avenue to victory.

This deck can win the old fashion way, as there are some other planeswalkers as win conditions as well. Plan A isn't always going to work out, so every deck that does have Saheeli Rai and Felidar Guardian should also have an alternative route to victory. After sideboard there may be decks that are very hateful towards the combo, so you can bring in additional countermagic and threats, which allows you to turn into a normal Jeskai Control deck. Control wasn't very well positioned before the bannings, but with Emrakul, the Promised End and Smuggler's Copter gone, I expect to see a resurgence in control decks in general.

I would like to explore some other ways to take the Standard Splinter Twin combo though. For instance, here's an aggressive take with more threats.

This is a Jeskai Vehicles deck with a big twist, and many of the cards are here for synergy purposes. If Saheeli Rai and Felidar Guardian are going to be jammed into a deck without a good way to protect the combo, they should be reasonable cards on their own. Here, making copies or blinking Thraben Inspector, Glint-Nest Crane or even Pilgrim's Eye helps provide additional value. The other possibility is getting out to a fast start so that when you do play Saheeli Rai the opponent will be too worried about your other threats to be able to answer the planeswalker. The other nice thing about Saheeli Rai here is that it can immediately come into play and crew Heart of Kiran.

You don't actually need a ton of three-power creatures in order to put Heart of Kiran in a deck. With six planeswalkers main and more in the board, you want to be using loyalty to crew this powerful vehicle. The other vehicle in the deck is much easier to crew with creatures, and that is Aetherspere Harvester. Heart of Kiran is the flagship vehicle in Aether Revolt, which is allowing Aethersphere Harvester to fly under the radar. This card is a nightmare for aggressive decks to deal with, because of the high toughness and ability to give itself lifelink, making it very strong.

Having a good amount of vehicles helps justify the Glint Nest-Cranes. The deck wants another two-drop, and Selfless Spirit doesn't synergize that well here. While running Glint-Nest Crane is unconventional with only eight artifacts to find, it is great with the combo pieces. Mentally prepare to whiff with Glint-Nest Crane, but even if that happens sometimes, all you need is a body to protect your planeswalkers.

Spell Queller is another powerful three-drop worth running. While straight white-blue decks won't be as popular as they once were with the loss of Reflector Mage, Spell Queller still should find homes in decks that can cast it. Spell Queller could be in a great spot in the format as a way to disrupt combo decks, as there could be less removal spells being played overall. We see once again in the sideboard here some alternative threats, and this deck has a lot of directions it can go depending on if the opponent is more worried about aggressive creatures or an inability to answer Saheeli Rai and Felidar Guardian.

After showing two different Jeskai decks – both of which include the two-card combo but are at opposite ends of the spectrum, from aggro to control – let's move on to midrange, where we also add a fourth color. This isn't because adding a fourth color is necessary, but it does widen your options.

If we go into a fourth color it needs to be green for the mana fixing. With Attune with Aether and Servant of the Conduit, the mana here is actually not much worse when compared to the three-color variants. You do need green early though, which is why there are so many basic Forests. This deck has some of the best energy creatures in Standard, so there is definitely an energy sub-theme. Whirler Virtuoso and Longtusk Cub give you a couple ways to convert that energy into real value. This deck can win by curving out with solid creatures, with Verdurous Gearhulk as a way of helping turn the corner incredibly quickly.

There is a theme you'll notice with Felidar Guardian, and that is to play it in decks with enters-the-battlefield effects. In these shells Felidar Guardian is a reasonable card on its own and the trigger when it comes into play is very important. Here we can blink out Whirler Virtuoso, Rogue Refiner, Verdurous Gearhulk, or even Oath of Nissa! The deck can easily win with card advantage. Cards like Whirler Virtuoso and Rogue Refiner are great because even if the opponent kills them you are still up on resources.

This is a midrange deck, so games can play out in a variety of different ways depending on what the opponent is playing. There are both Harnessed Lightnings and Aether Meltdowns to deal with aggression. Part of the reason I like having access to Aether Meltdown is the ability to shut down a turn-two Heart of Kiran, and then untap and play Saheeli Rai. Both Aether Meltdown and Harnessed Lightning have their spots, but I would rather have one of each than two of one.

The sideboard is reminiscent of some of the Aetherworks Marvel decks we have seen. Tireless Tracker and Bristling Hydra are creatures that control decks are going to have lots of trouble with. This deck has access to late-game tools that give it plenty of play against the grindiest of control decks.

I have presented three different decks which incorporate what I expect to become known as "the combo" of Standard. As the format begins to develop there will continue to be work done on the Saheeli Rai-Felidar Guardian combo, and I am excited to see how these builds stack up against the new Standard format as a whole.