Yu-Gi-Oh Zexal had its issues, but one thing that did shine through was the awesome might of Number 39: Utopia. While Dark Magician and Blue-Eyes White Dragon were cool in the animated series, they were less than stellar in the TCG. Stardust Dragon was amazing, but the re-trains that followed saw next to no table time. Heroes are pretty good now, but there are still bushels of useless HERO monsters and forgotten support cards that might be filling shoeboxes under your bed as you're reading this.

The Utopia series was different: Number 39: Utopia's been reinvented again and again, and almost all of them pretty good! In today's video, Doug breaks down the Utopia theme and covers each card's competitive impact. Doug goes from Number C39: Utopia Ray to Number 39: Utopia Double to show you what makes them Extra Deck all-stars.

Which ace monster series still has a place in your decks? Are you waiting for your Elemental HERO Flame Wingman support to finally arrive, or are you a Blue-Eyes purist that remembers the good old days? Let Doug know in the comments which Ace Monster series you think is best and then go Double or Nothing! with Johnny Li's article looking back at Yu-Gi-Oh's past! 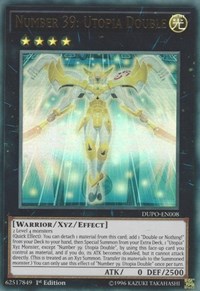