There's been a lot of discussion about Crystron Halqifibrax and its impact on competitive play – even if in-person events seem so distant with nationwide stay-at-home orders and quarantines.

The assumption is that once competitive play returns, it will probably end up being dominated by Halqifibrax-based combos, and innovators are already looking for ways to beat the post-lockdown meta with cards from Eternity Code and beyond. Over the last couple of weeks a new counter to Halqifibrax has emerged as a turn-ending Side Deck pick: Gizmek Uka, the Festive Fox of Fecundity.

All of the Gizmek cards are surprisingly strong in the right setting, and Gizmek Uka's no exception. Its third effect Special Summons any monster from your deck that has the same ATK and DEF, provided your opponent controls a monster with the same Attribute. Those conditions aren't hard to meet, and current trends in the competitive environment have put Uka in a prime position to answer one of the game's most popular combos. Uka has plenty of potential going forward, and I'd even risk running it in the Main Deck in some strategies. 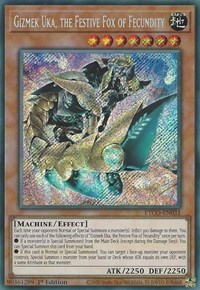 Foxes And Statues
Floodgates have had a very successful history in modern Yu-Gi-Oh, and games are often won by the player who can get their floodgates into action first. Turn 1 floodgates are ideal, but fielding a floodgate on your opponent's turn when you're playing second is especially powerful. Artifact Lancea, Chaos Hunter, and Droll & Lock Bird all shut down common mechanics and can hit the table on Turn 1. Gizmek Uka, the Festive Fox of Fecundity has the same potential, and its third effect lets you Summon a floodgate monster straight from the deck: a Barrier Statue of your choosing.

Uka's popularity is largely tied to its ability to Summon Barrier Statue of the Torrents in response to Crystron Halqifibrax's effect. You can activate Uka's second effect whenever a monster is Special Summoned from the Main Deck, which in turn Summons Uka from the hand. You can activate Uka after Halqifibrax resolves to drop Uka on the field, then activate its third effect to target Halqifibrax and Summon Barrier Statue of the Torrents from the deck. Most players aren't prepared to have their Special Summons limited to Water monsters for the rest of the turn, so it's unlikely they'll continue making plays. Completely shutting down your opponent's Turn 1 push, even beyond what Nibiru, the Primal Being's capable of, is seriously impressive and deserves a closer look.

Of course, Uka isn't exclusively a counter to Halqifibrax. While Halqifibrax is somewhat ubiquitous among today's best decks there are still plenty of other combo pieces that could be targeted by Uka to Summon a relevant Barrier Statue. The trick to making Uka effective is finding a combo piece to target that has an Attribute that doesn't match the rest of the deck, and ensuring your opponent can't pivot into monster removal to destroy your Barrier Statue. Barrier Statue of the Torrents is effective because Halqifibrax is typically the only Water monster in your opponent's Main and Extra Deck, which makes any other Special Summons impossible that turn. The biggest weakness of the Barrier Statues is their vulnerability in the Battle Phase, but your opponent won't get that opportunity for a while if you play Uka on the first turn of the duel.

Uka presents a number of new challenges for duelists playing combo strategies. It can be played much faster than Nibiru, and it largely can't be played through. Ash Blossom & Joyous Spring is the most common answer, but there are a few old school picks like Forbidden Chalice that could work as well. Dark Ruler No More is effective, but it would be a baffling choice for a player going first. Generic Monster removal isn't bad either, but again, you'd be asking the duelist playing first to run cards designed to break set-ups. It's a counter siding strategy that only works in Game 3, and not one I'd recommend. Instead, Forbidden Chalice offers flexibility as a defensive option and as a reactionary counter to Uka.

Main Deck Potential?
Gizmek Uka, the Festive Fox of Fecundity can fit into your Main Deck if your strategy meets a few prerequisites. First, your deck must have worthwhile mained summons for its effect. Ideally your summons will carry some sort of disruptive ability to stall your opponent's push, which is exactly what makes the Barrier Statues so appealing. Note that whatever you Fox for doesn't need floodgate effects – good Quick Effects will work even if they're not as devastating to your opponent. Instead you'll be relying on Uka's ability to kickstart your engine, or give you access to powerful removal.

Secondly, if you're going to Main Deck Uka you'll need a way to trigger its second effect: the one that Special Summons Uka from the hand. Typically you'd only Side Deck Uka when playing second, so if you're Main Decking it you'll often want to Summon it during your turn. You can take control of Uka's Summoning by simply Summoning a monster from your Main Deck, which isn't too challenging for many of today's strategies. If all else fails you could try to Normal Summon Uka – its third effect will trigger exactly the same.

Finally, a Main Deck Uka's nothing more than a conditional extender if you don't have a proper mix of Attributes in your deck to use with its third effect. Siding Uka lets you wait to see what your opponent's playing, but Uka could be completely dead in some match-ups. There are two ways to solve that problem: you can give your opponent monsters to guarantee that they'll have matching Attributes on their field, or you can change the Attribute of your opponent's monsters.

Giving your opponent monsters isn't hard, you can do it with Black Garden, Lost World, or Kaijus, or with Tokens from Girsu, the Orcust Mekk-Knight. Changing the Attribute of your opponent's monsters is a little trickier, but Predaplant Verte Anaconda and Reprodocus will both get the job done. 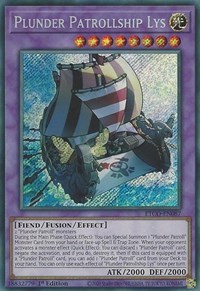 Finding Main Deck Homes
So what decks fit every criteria? Generaiders have three Main Deck monsters with the same ATK and DEF, and two of those monsters have disruptive Quick Effects. Harr, Generaider Boss of Storms can negate card activations and force your opponent to drop a card after resolving a search effect, while Loptr, Shadow of the Generaider Bosses can tribute itself to Special Summon another Generaider with a Quick Effect from the deck. While Harr and Loptr cover Dark and Fire respectively, Mardel, Generaider Boss of Light covers Light. She doesn't have a Quick Effect like the other two, but she's your most likely target. The deck's Field Spell, Generaider Boss Stage, Summons Tokens to your opponent's field. Those Tokens are Light Attribute, so they're a perfect match with Mardel. Loptr also sets up Uka's Special Summon during either player's turn with little effort.

Interrupted Kaiju Slumber sets the stage for Uka, but you'll run the risk of having too many potential dead draws at once by doubling up on Kaijus and copies of Uka. Lost World Dinosaurs do a fantastic job of setting up Uka, but they don't have as many outstanding picks to Summon from the deck. Girsu, the Orcust Mekk-Knight sets up some interesting combos with Uka, but I'm not sure what you'd use to Summon Uka yourself. Uka's also an Earth monster, which conflicts with the Orcust engine. That said, Girsu can become a Tuner for your own Crystron Halqifibrax plays.

Uka has a serious long-term potential as an answer to strategies and combos built around Summoning monsters from the deck. There's a Barrier Statue for every Attribute, and plenty of themes that benefit from playing Uka with or without a floodgate. Uka isn't uniquely strong against a particular Extra Deck Summoning mechanic, which means it's largely evergreen: you'll be able to play it in formats where certain Extra Deck card types are popular, or ones where the Extra Deck goes unused. It's surprisingly flexible, often devastating, and well worth considering for your Side Deck.