The year is 1999, and Pokémon rules the playground. Children abandon tarmac and jungle gyms to huddle around stacks of cardboard. While actual knowledge of gameplay is scarce, the cards are fervently desired and hotly contested. Many a friendship is forged and splintered through the bartering of these Pocket Monsters.

Most desirable among them all: Charizard. To own one of these orange dragons is the adolescent equivalent of driving a Ferrari. It is a status symbol amongst collectors both old and young. Nevermind that the card itself saw little competitive play—many of Charizard's most devout acolytes didn't know the rules to the game. It didn't matter to them that the card was hard to get into play, required too much energy to be efficient, and had a retreat cost that locked it onto the front line. It had more HP than any other card, it was shiny, and it featured a ferocious dragon spitting fire. 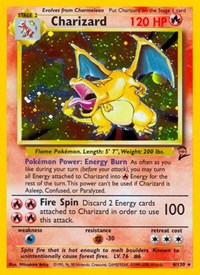 Charizard has remained a status symbol, both the original card (which still sells for a decent price on TCGplayer despite its aforementioned unplayability) and every iteration since. With perhaps the exception of series mascot Pikachu, Charizard is one of the most recognizable, most coveted creatures in the franchise, and you better believe that Nintendo is ready to cash in on that. For every new iteration of the game, whatever mechanic designers introduce to shake things up, there is a new, often literally shiny, Charizard card to accompany it. The same is true for many of the most popular monsters, and tracking a single creature's different appearances is a great way to see how the game itself has changed over time. While key features of Charizard typically remain the same (attacks that require discarding Energy, beefy HP), every new generation brought new tweaks to one of the most iconic dragons in the public consciousness.

So walk with me, if you will, through some of Charizard's most notable appearances in the TCG and see how it and the game has evolved through the ages.

Back at the turn of the century, Pokémon's roster was still limited to Generation 1, which meant that eventually every single critter had appeared on a card. So Wizards of the Coast, the company designing the TCG at the time, had to come up with a creative way of justifying creating multiple cards for the same monster. Sure, they could have just designed different cards and called them all "Charizard," and no doubt we would have doled out more pocket money to capture the new version of the iconic orange lizard. However, the secret to turning a fad into a staple with staying power is constantly finding ways to recapture our imagination. Wizards of the Coast wasn't satisfied with creating just another Charizard card. They wanted to make a new Charizard, and a new line of cards, that would make playgrounds buzz. 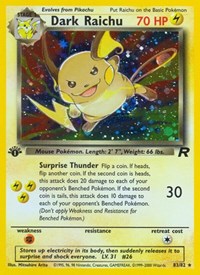 Enter Dark Pokémon. The idea was that Team Rocket's Pokémon would naturally reflect their villainous Trainers (after all, there are no bad Pokémon, just people who use them for evil). This new line of Pokémon were drawn with grimaces, scowls, and bared fangs, and Dark Charizard was no exception. 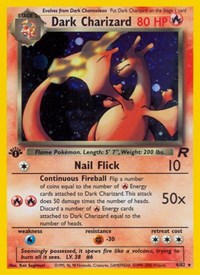 He looks like he's about to hold you upside down and shake all the loose change out of your pockets. He is also a total lightweight, weighing in at only 80HP. Once again, his signature attack also plays fast and loose with his energy, meaning keeping him powered up is a struggle. He's not a viable card—but admit it. He looks cool.

This new line of Pokémon did its job, and introduced a formula that would hold true in the TCG for many years: add aesthetic and lore changes to the cards without messing with the core mechanics. This would carry through to the Gym sets, with Blaine's Charizard. Then came Generation 2, and finally Wizards had new Pokémon to play around with. However, even with a bunch of fresh meat, the demand for old favorites was too high, and Charizard ended up getting a card in the final Jhoto-focused set Neo Destiny. 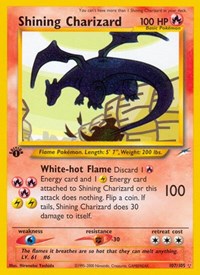 Notice how Shining Charizard requires both Fire and Lightning Energy for its second move? What hasn't changed is Charizard guzzling up your Energy like an Arizona flower garden thirsty for water. Another recurring feature: people wanted this card. People paid money for this card. People will still pay money for this card—in the hundreds of dollars—even though it's not very good. This wasn't the first time Pokémon had included a rarity above the standard holo rare, but Shining Pokémon proved that secret rares could bring in the big money as collectors dished over entire paychecks to acquire particularly rare cards.

There were a couple more iterations of Charizard that weren't particularly notable, but then we hit 2004 and Charizard ex was released (notice how the 'ex' is lowercase—for now). The idea behind ex Pokémon is that they were ridiculously overpowered at the cost of earning your opponent two Prize cards when Knocked Out. 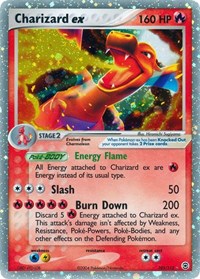 Charizard ex featured an attack that could one-hit K.O. even notorious brickwalls like Wailord ex (who for some reason was not resistant to Fire). He wasn't sustainable long-term, but as a finisher, he was hard to beat. Pokémon ex represented a shift in scale for the game, the gap widening between the powerhouse Pokémon like Charizard and common ilk. While Rattatas were never destined for greatness, now they weren't even effective meatshields.

It's worth noting that Pokémon ex were the invention of The Pokémon Company, who had taken the license back from Wizards of the Coast. Changing game designers meant there was a bit of a transition phase, and Pokémon ex were met with some cries of power creep. Maybe that is why the next few sets tried experimenting in different ways—and felt underwhelming. Rather than up the ante and risk becoming unsustainable, the new designers decided to tweak the formula by taking Pokémon and shifting their traditional types. The once firey Charizard became a Steel/Lightning Hybrid. 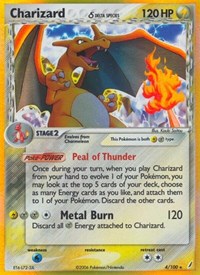 Confession time: Delta Pokémon triggered a brief hiatus from the game for me. Charizard is not a Steel/Lightning type, I thought bitterly, and since I was fifteen and in high school, I was not willing to be convinced otherwise (perhaps the fact that the cashiers at Walmart always commented how cute it was that a high schooler was buying Pokémon was another factor).

I was completely absent from the game for the next major Charizard innovation, and I think perhaps the shame of publicly buying Pokémon would have been worth it. Charizard Star was still one of those ridiculous Delta Pokémon, but it featured a Shiny Charizard, the type was Dark (far more appropriate to such a grumpy reptile), and it is still like $600 freaking dollars. 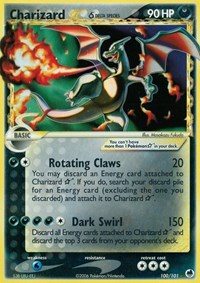 Again, the power of a mere palette swap elevates this card from a simple end-of-game-closer to a unique collector's item. I wish I had it. 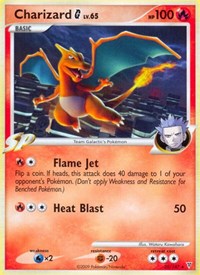 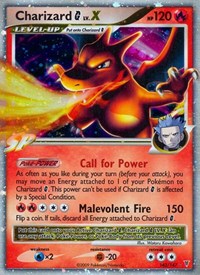 Ever since its initial release, Pokémon has struggled with one of its core mechanics: Evolution. To get a Stage 2 Pokémon like Charizard even in play, you need to evolve a weak, fleshy Charmander twice. That means you have to either draw every card in the line, or dedicate resources to digging them out of your deck. Compare that to ready-made heavy-hitters like Snorlax and Hitmonchan, who need no Evolution to be a threat, and many times Evolving wasn't worth the risk or the effort. The designers fought against this conflict at every iteration, trying to entice players into including scrawny, easily slayed Charmander into their decks. It was usually met with mixed results.

"Wait!" you cry. "Isn't that the same thing as a Mega Evolution?" No, Level X cards predate Mega Evolutions by at least six years. However, this was definitely a precursor to the concept, and it's fun to see the franchise honing ideas, bringing them back tweaked and under a different name.

Or sometimes the same name, but with slightly different capitalization. Enter Charizard EX. 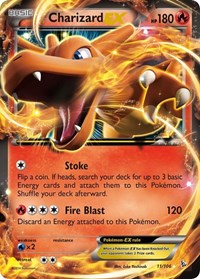 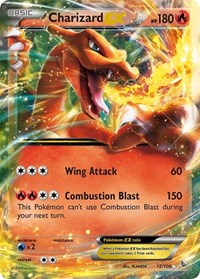 Pokémon EX are the start of what most would consider "the modern Pokémon card game." Gone is even a charade of wanting you to spend the first five turns of the game evolving Pokémon, and gameplay has become much more streamlined and rapid. To counter that, Mega Evolutions were also introduced.

Playing a Mega Evolution automatically ended your turn without a chance to attack, and knocking out either a Pokémon EX or Mega would yield two Prize cards. More risk, but certainly more reward. This is also the place I came back into the game, as I was unable to resist the siren song of Pokémon. 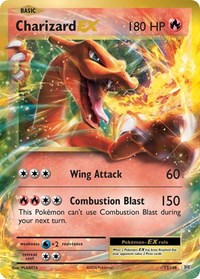 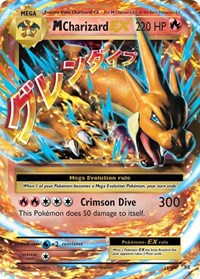 So Pokémon still found a way to incorporate Evolution as a mechanic, but they made sure that even before evolving the Pokémon served some utility.

However, just as with the original Pokémon ex, there were complaints of power creep. Games went fast and hard, and in response the next iteration took a step back and introduced evolution as a core mechanic with Pokémon GX. 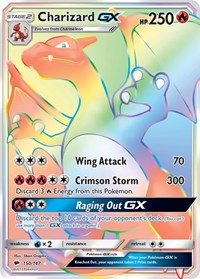 The payoff for waiting at least three turns before getting Charizard GX in play? You can use the GX attack, which is a once-per-game blitz. Charizard GX combines Charizard's trademark Energy-hog status with deck destruction. If it's towards the end of the game (or if your opponent is liberal with the card-draw) ten cards could be enough to force your opponent to deck-out, which is a loss. Not too shabby, especially in a format that desperately wants to slow the game down and force you to go through more of your deck anyways.

Finally, we arrive at the most recent edition of the king dragon: Charizard V and Charizard V Max. 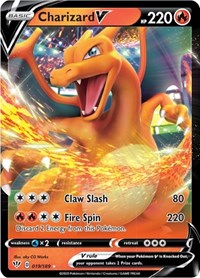 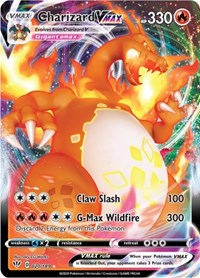 Check out how much and how little has changed over the years. Charizard V still has Fire Spin as its final attack. Its damage output is upgraded, but it's the same attack at its core: powerful and costly. Take that and pump it up some more, and you have Charizard V Max. Borrowing from Sword and Shield's new Dynamax mechanics, everything about this V Max Pokémon is larger. It does more damage, has more health, and will reward your opponent with three Prize Cards when defeated. That's halfway to victory.

Charizard V Max definitely hits hard, although time will tell if there is the proper engine in place to help him hit fast enough to make it into decks. Even if the lizard is too slow to be a contender, have you seen the rainbow promo version? It's beautiful, and cool, and history has proven that beautiful, cool Charizards are highly beloved, regardless of how viable they are in top tier decks.

And yes, there are plenty of beautiful, cool Charizards that we didn't have time to cover. Seriously, part of the reason Pokémon has lasted this long is because you don't have to even play the game to appreciate the cards. Sometimes, you just want to look at an angry dragon breathing fire, and that should be reason enough.