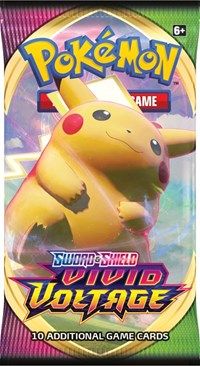 What's up, Trainers? It's been a truly exciting month in the world of the Pokemon TCG. On Friday, September 18, our friends in Japan welcomed the release of their new set "Amazing Volt Tackle (仰天のボルテッカー)," the fourth expansion in Pokemon Sword and Shield. As the booster pack artwork seems to focus on Pikachu and its Gigantamax form overtaking an entire stadium, we can probably look forward to a lot of hype - and accessories - featuring our favorite yellow mouse.

In North America, our English expansion, dubbed "Vivid Voltage," will be released on November 13, 2020. Japan saw the release of their third Sword and Shield set, "Legendary Heartbeat", back in July. It's currently believed that Vivid Voltage will combine its Japanese counterpart set with the Legendary Heartbeat set for areas outside Japan...but please keep in mind that no official confirmation has been made for areas outside Japan by the Pokemon Company. It's very likely we see something slightly different when it comes to America in terms of release timing, product, and official setlists.

This week, we're going to take a look at some of the newest and truly amazing Pokemon that we'll hopefully get to play with in the next few months.

What's so amazing, you ask? Well, for starters, "Amazing Rare" is a brand new type of card rarity that has been introduced in Japan, starting with Legendary Heartbeat. These cards are easily identifiable by a gorgeous prismatic rainbow background in the illustration, along with a unique "A" rarity symbol on the bottom left of the card.

Keeping things simple is the fact that no new mechanics are going to be introduced with Vivid Voltage, and the card text makes no mention of anything like a one card per deck limit. What we will see is a slight challenge to playing these, because "Amazing" attacks all have multi-colored attack costs, ranging between two and three different colors. These guys don't have any special Prize card effects either - these are single Prizes. While Amazing Pokemon have somewhat awkward energy costs, not to mention kind of low HP, the attacks can be crazy good - especially if you love going big with combos. 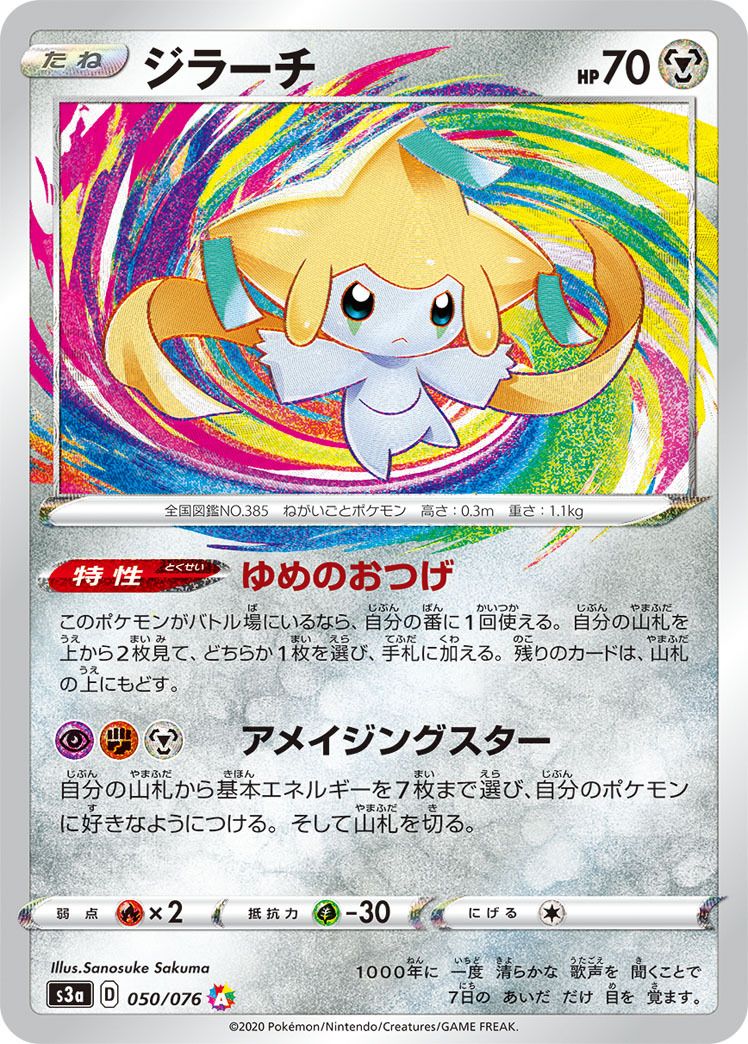 Ability: Dream Oracle
Once during your turn, if this Pokemon is your Active Pokemon, you may look at the top 2 cards of your deck. Put 1 of them into your hand and return the other 1 on top of your deck.

[P][F][M] Amazing Star: Search your deck for up to 7 Basic Energy cards and attach them to your Pokemon in any way you like. Then, shuffle your deck.

Let's start with the Ability. Previously in tournament play, you might have seen Jirachi (from Team Up) used as a way to quickly find a Trainer card that you can then use to search your deck for other necessary cards - think Energies, additional Trainers, and Pokemon. You search your deck, hopefully get a Trainer card, and go to sleep. Maybe you used an escape board on your next turn (before the recent card rotation) to retreat Jirachi, if Jirachi didn't wake up.

With Jirachi Amazing Rarity, you're getting 2 cards to choose from, whereas previous Jirachi could allow you to look at up to 5 cards. But, you're no longer restricted to just Trainers - and that really can be amazing, despite the smaller pool to choose from. You might pair this with a benched Oranguru to quickly draw into both cards per turn, assuming you can maintain under 3 in hand. This new Jirachi lets you place anything in your hand, and you also don't end up with a sleeping Pokemon - I'd say that's going to see a decent amount of play.

Pair Jirachi with a U-Turn Board and you can re-use its Ability multiple times, moving it off the battlefield and onto the safety of the bench.

When we look at Jirachi's Amazing Attack, as with all multi-color Amazing Pokemon, the cost is a bit intimidating. Depending on what Pokemon types you're playing, you'll need to draw into three different types and still have 7 basic Energy in your deck to power up other powerful monsters. It's not quite likely to be able to get 3 different types reliably, so to deal with this, you can use Aurora Energy to cover an Energy type. Maybe throw a Metal Saucer out there and get a Metal Energy attached from your discard - which, by the way, can absolutely benefit any of the Amazing Pokemon that need Metal Energy. You can possibly even use a Karate Belt to pay one less Fighting Energy. If you're playing Expanded format, you could use a Counter Energy; unfortunately, it rotated out of Standard gameplay in August. Sure, none of these solutions are perfect, but you do have options. And if successful, though it's difficult to do, getting all 7 energies out could really change your entire game.

In the end, though, I think players will be using Jirachi for its Ability and not so much the attack. Another possibility lies in using Jirachi to attach Energies to another Pokemon - or maybe a couple of the new Rayquaza Amazing Rare, seen below - and then using Items to transfer energies between them as needed. If you somehow manage to pull this off, you'll have a really bonkers combo.

Maybe try using a Jirachi to put the 7 energies on a pair of Rayquaza, and then try to get an additional energy on the second one. With this setup, you could potentially deal 320 damage each, knocking out a VMAX or other larger scale opponent to really maximize prize cards, and possibly draw all 6.

I'm kind of doubtful that this could work out reliably. You could always quickly pump your VMAX options or maybe, or possibly get something going with Mew V. I'd love to hear your ideas or plans for Jirachi in the comments! 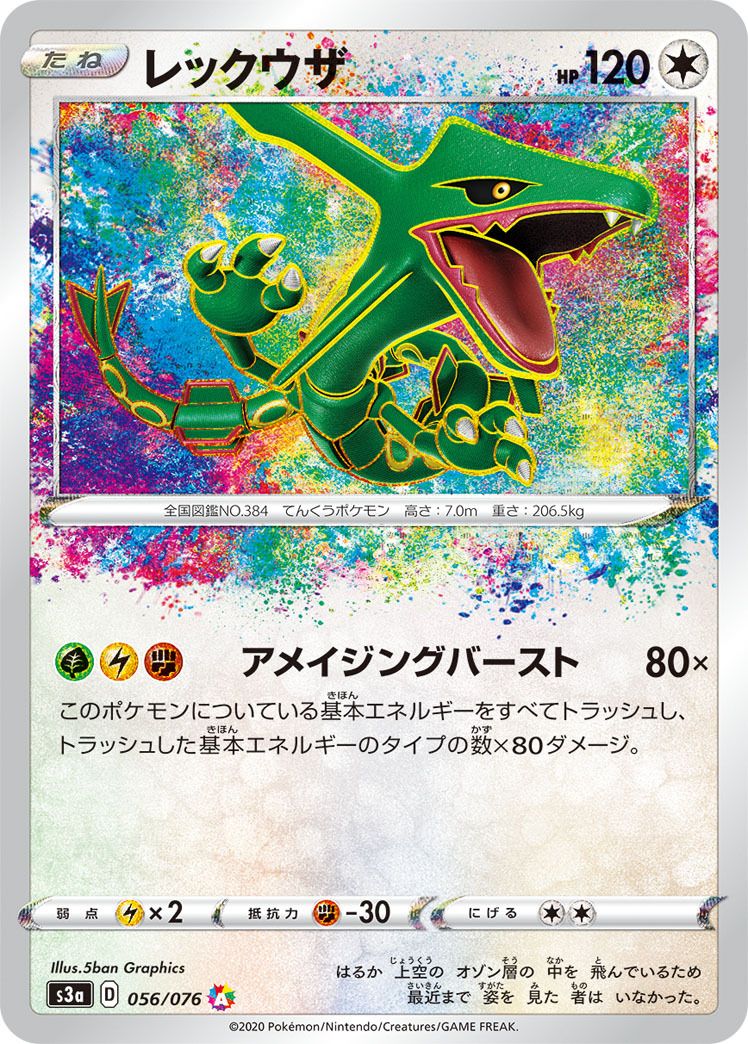 [G][L][F] Amazing Burst: 80x damage. Discard all basic Energy from this Pokemon. This attack does 80 damage for each type of basic Energy you discarded in this way.

Can I just say I absolutely LOVE this artwork, especially if we get to see a nice sparkly foil?

As I mentioned earlier, a Jirachi can possibly work well with Rayquaza...but currently, it's a bit difficult to power up Rayquaza in order to really be playable at this time in Standard (and I'm not even sure where I'd insert him when playing Expanded). I'd keep an eye on the Meta Game and look for future releases to introduce more complementary cards, because having to discard all energy is making this really difficult to work with. 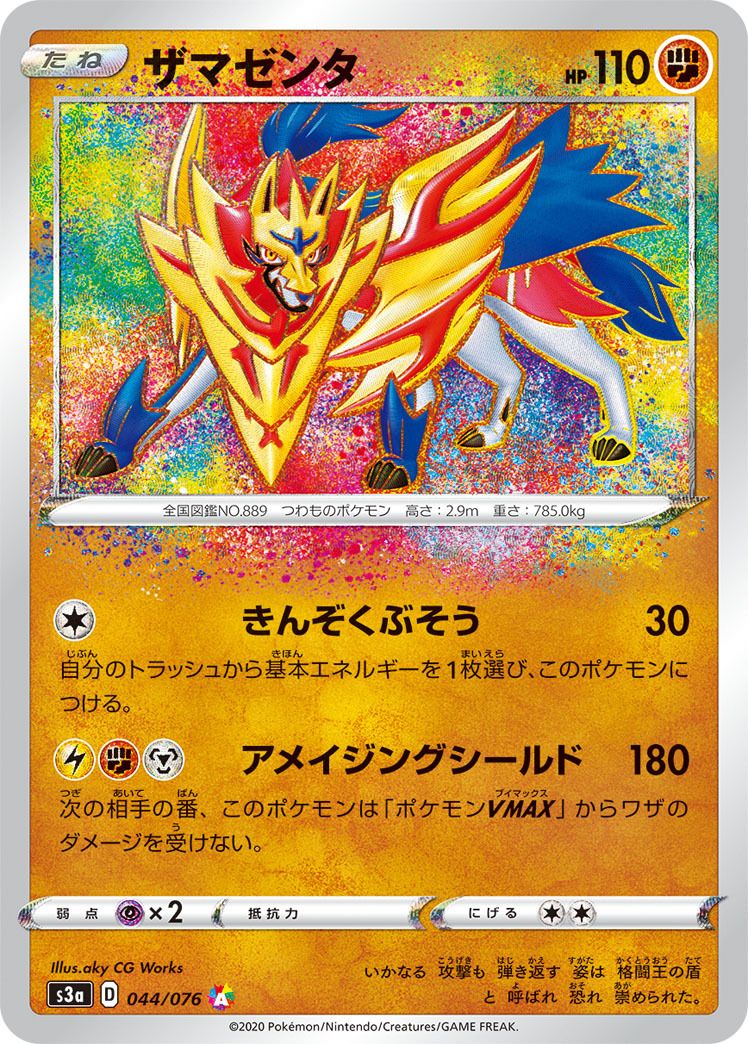 [C] Metal Arms: 30 damage. Choose a Basic Energy from your discard pile and attach to this Pokemon.

[L][F][M] Amazing Shield: 180 damage. This Pokemon takes no damage from the attacks of VMAX Pokemon during your opponent's next turn.

Zamazenta is a fighting type, which can definitely be playable with the right supporting cards in Standard. Its lesser attack does 30 damage and attaches a metal Energy from your discard pile to this Pokemon, so that's great right off the bat, setting you up to fire off its wonderfully defensive Amazing Attack fairly quickly. If you're playing second, you could even theoretically attach a [L] or [F] Energy, start with this Pokemon as your Active Pokemon, maybe get a metal energy in the discard pile through an item, attack with Metal Arms to attach your Metal Energy, and be able to either get the third energy from your hand! Or maybe use a Karate Belt.

The 180 damage can knock out quite a few basic Pokemon early on and can pose a threat to larger adversaries. And again, like all the other Amazing Pokemon, this one has super tricky attack costs, but remains playable with the right support. Again, you can try to make this work with the Jirachi Amazing Rare, though it's challenging to pull off.

Some threats from the set, like the "Big Boi" Pikachu VMAX, will not only be weak against Zamazenta - and Zamazenta gets damage immunity from VMAX Pokemon with Amazing Shield on your opponent's next turn. So who knows, maybe this card will see some play! 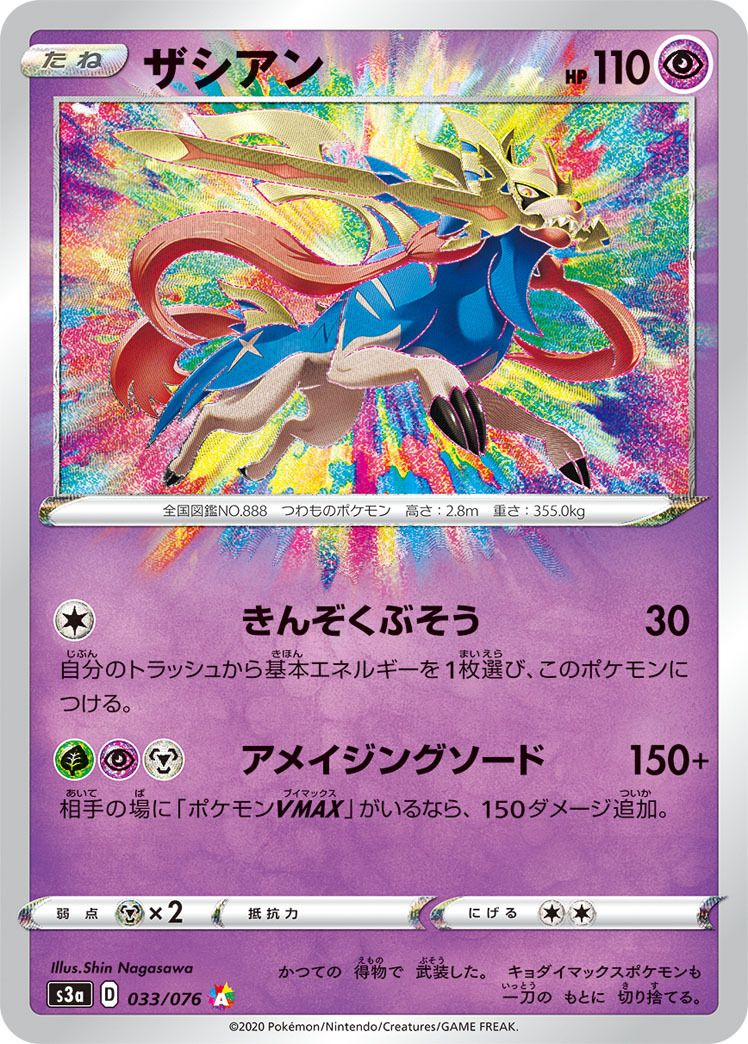 [C] Metal Arms: 30 damage. Attach a Basic Energy from your discard pile to this Pokemon. [G][P][M] Amazing Sword: 150+ damage. If your opponent has a Pokemon VMAX in play, this attack does 150 more damage.

It's fitting that the sword-bearing counterpart from the Sword and Shield series would also have Metal Arms as an attack, but also a more offensive Amazing Attack. But unlike Zamazenta, Zacian's attack specifically seeks to lay on the damage to VMAX Pokemon. Now, 300 Damage to a VMAX might not be enough to knock it out on its own, but you're definitely making headway. A couple of Trainer cards could help pile some additional damage. 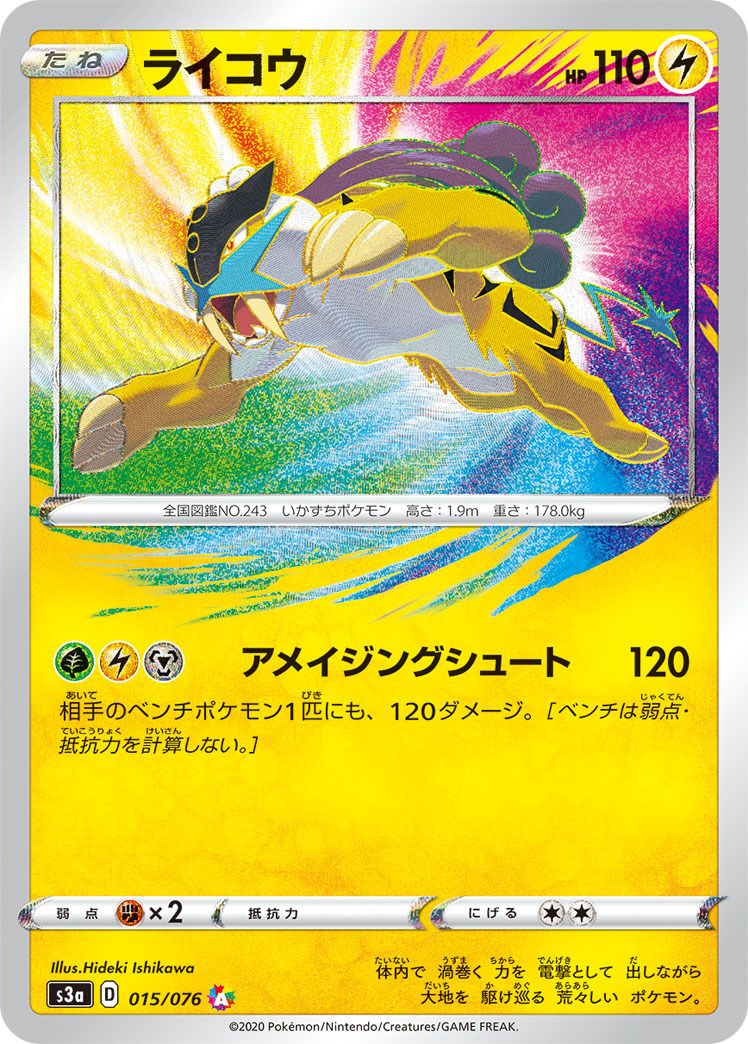 Of all the Amazing Pokemon options, I have to admit Raikou is my favorite, both in terms of artwork and its potential in a deck. 120 damage to a Benched Pokemon in addition to the Active?! Now, don't get me wrong, 120 might not faint every Pokemon out there. I get it. But on the other hand, this can really come in handy and possibly even give you 2 KO for each attack. I think Raiku has a lot of options for Energy acceleration, and Air Balloon is pretty useful for when you need to reel it in (or with any of the Amazing Pokemon options, really.) 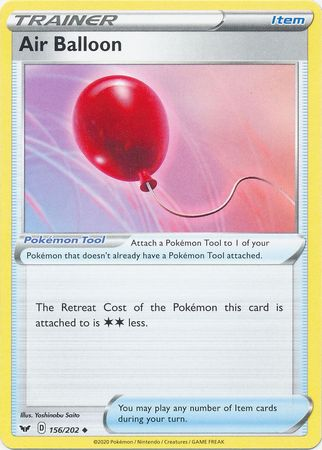 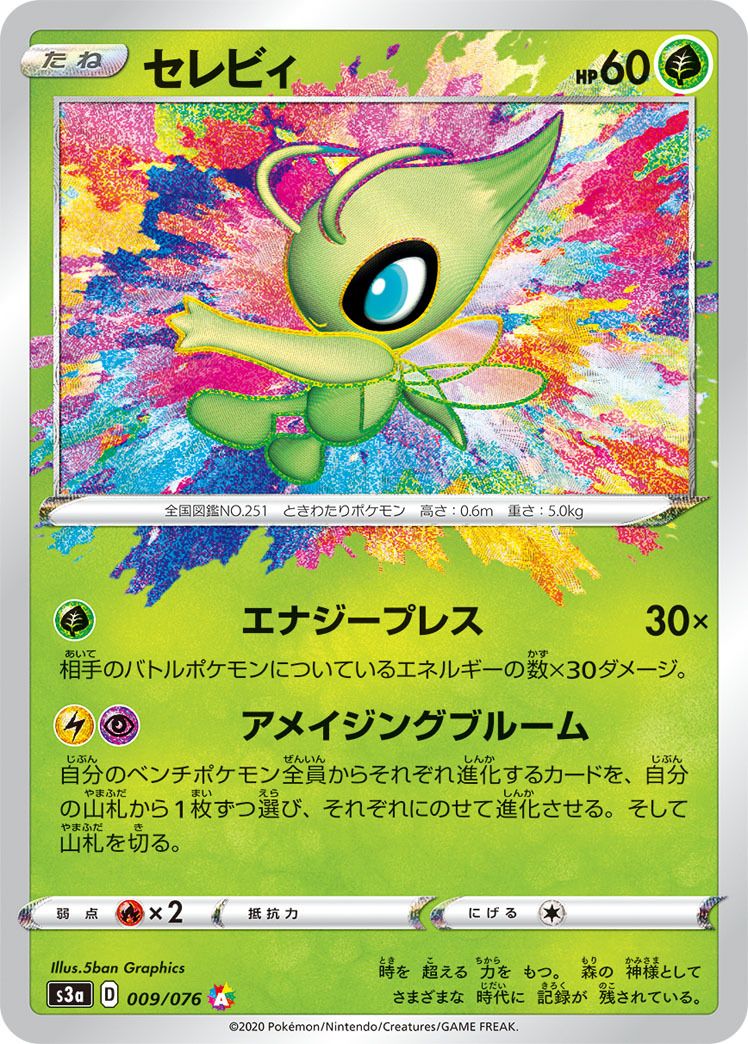 [G] Energy Press: 30x damage. This attack does 30 damage times the number of Energy attached to your opponent's Active Pokemon.

[L][P] Amazing Bloom: Search your deck for a card that evolves from each of your Benched Pokemon and play those cards on top of the Pokemon to evolve them. Then, shuffle your deck.

Finally, we come to the last Amazing Pokemon that we currently know of, Celebi. Another beautiful techinicolor art piece, Celebi has two attacks and, surprisingly, we see its Amazing Attack as costing only 2 Energy. Now, even if we just have one Grass Energy, we could still potentially unleash a bunch of damage if there is a high powered opponent on the battlefield - preferably a Pokemon with a weakness to grass (although admittedly, there aren't an overwhelming number of those at the moment). Since Celebi has a low HP and there are a decent number of playable Fire Types right now, you need to be wary of getting scorched.

That said, I think things could get interesting with Amazing Bloom. This attack allows you to go through your deck and pull evolutions for each of your (up to 5) benched Pokemon and evolve them all- with no mention of a restriction to Basic Pokemon .This could very well lay the foundation for a great setup, rather than being useful for damage. Could it be possible to evolve a Stage 1 Pokemon into a Stage 2 Pokemon on turn 2? I think so. Tricky, but possible. And, like with other cards, we can use Aurora Energy to quickly get this powered!

All in all, I think the upcoming Vivid Voltage release holds a lot of gameplay potential, with the opportunity for players to set up some serious, if challenging, combos. To be honest, though, I was sold on the set from my first look at its rainbow of visually stunning card art. November 13th can't come soon enough!