We may have been spoiled with Aether Revolt. There were a number of cards in the set that were clearly going to be huge in Modern, including Fatal Push. The cards that will make an impact on Modern in Amonkhet aren't as obvious, but that doesn't mean they don't exist. Today I want to go over the 10 best you'll find in the set.

I am leading off on a God that clearly is going to be good if you can consistently turn it into a creature. Bontu the Glorified should work well in Aristocrat-style decks that actively want to put creatures into the graveyard. Because Bontu the Glorified is legendary it is unlikely you will want to play a full playset of these, but there are places where this could fit in well.

Finding room for a couple copies of Bontu the Glorified shouldn't be too difficult. Abzan Ascendancy is perfect in a deck that wants creatures going to the graveyard, and Return to the Ranks allows you to rebuy everything! Bontu the Glorified can supplement Blood Artist as a way to drain the opponent out.

The easiest card to compare Soul-Scar Mage to is Monastery Swiftspear. The fact that Monastery Swoftspear has haste means it can get in for an extra damage or two the turn it comes into play, and an extra damage or two can make all the difference for a deck like Burn. However, Soul-Scar Mage can become prowess creatures 5-8 for decks that already have four Monastery Swiftspear. Giving creatures -1-1 counters is actually really nice versus persist creatures like Kitchen Finks. The counters also mean if a burn spell doesn't outright kill a creature you can still shrink it and then deal with it later.

For instance, if the opponent has a Tarmogoyf sometimes you want to Searing Blaze it, and this way even when it has more than three toughness, it will be great to give it three -1-1 counters, which will be important for the entire game. Overall Soul-Scar Mage isn't as good as Monastery Swiftspear in Burn, which is why it's not higher on the list, but as a cheap prowess threat it has potential.

Okay, so this isn't a new card at all. Aven Mindcensor often gets overlooked, but it really is a fantastic answer to decks that want to search their libraries. Back when Birthing Pod was legal, Aven Mindcensor saw a ton of play, and now as an answer to Chord of Calling and Scapeshift it is still good, if not as effective against as many decks as it once was. It also supplements Leonin Arbiter nicely in Hatebears decks.

Angel of Sanctions is an all-round strong card that is powerful enough for Modern play. Midrange decks like Abzan could potentially want it as both a removal spell and a creature that can finish the game. The fact that Angel of Sanctions exiles any nonland permanent makes it versatile enough to be good against decks that don't have many creature threats, like Ad Nauseum where you can still exile a Phyrexian Unlife or Pentad Prism. That could be the difference in the game, and that is also a deck that has virtually no way to remove Angel of Sanctions once on the battlefield.

Embalm also plays nicely alongside self-discard like Liliana of the Veil. Similar to Lingering Souls, Angel of Sanctions is good in Abzan Midrange for that reason. The big issue is the mana cost. The fact that Angel of Sanctions costs five mana is going to limit how many copies you can play in a midrange deck, and it feels like mostly a one-of. Versatile removal with a body seems good, especially when there are many decks that don't have good ways to remove Angel of Sanctions from play.

There are many different counters in Modern, so this will be competing with the likes of Mana Leak and Remand. The fact that Censor is versatile and can cycle does make it worth some consideration. There are already some decks that play Mana Tithe, and I like Censor better than a normal Force Spike. There are times when Mana Leak just doesn't do anything and rots in your hand, and since most of the time the opponent will tap out during the early turns Censor and Mana Leak don't seem that different in that respect.

The issue may come up that if Censor catches on in Modern, players will start to consciously try to leave up one mana, and then there will be a real problem. Censor has a lot of competition, but we also haven't seen anything quite like it since Miscalculation was never Modern-legal, so we'll see if it takes off.

I'm particularly excited about the potential of this one. It may not seem immediately obvious why As Foretold could be good in Modern, but I think it starts with the fact you can cheat in zero-mana cards with suspend and cast them for free. Looking at some of the more powerful zero-mana suspend cards like Lotus Bloom, Restore Balance, Living End and Ancestral Vision, there are actually multiple cards that work well with As Foretold. Playing As Foretold followed by Ancestral Visions – and then being able to cast cards for free for the rest of the game – seems strong.

As Foretold can allow decks that have trouble casting all the cards in their hand to easily play two spells in a turn, or hold up countermagic after cheating a spell into play off As Foretold. This type of effect is uniquely powerful, similar to Brain in a Jar, except you can cast any type of spell off As Foretold. As Foretold is a build-around card, so while it won't be going straight into tier one strategies, it could spawn new decks.

These cards are on the list solely to make Living End better. It has been a while since we have had cycling creatures printed, and there are some in Amonkhet that seem better than the creatures Living End has had before.

Desert Cerodon is a one-mana cycler with six power, which is a better rate than any of the current cyclers in Living End! The red mana needed to cycle is something the mana base can definitely work around. I'm expecting to see Desert Cerodon played as a four-of in Living End. In terms of what should leave the deck, the weakest cyclers in my opinion are Jungle Weaver and Aquitects of Will. Aquitects of Will is a cycling creature that can't be hard cast, and that does come up. The body on Aquitects of Will is also less impactful than the other cyclers. Jungle Weaver costing two mana to cycle is a lot when you would hope to be getting a great creature but instead end up with a creature getting chump blocked or hit by removal a lot.

Similar to Jungle Weaver, Archfiend of Ifnir cycles for two mana, which is a pretty big downside. Comparing the two cards, it comes down to how important the ability on Archfiend is, and whether having flying is important. Affinity is one of the more difficult matchups for Living End, and I can imagine Archfiend of Ifnir being an all-star there. Cycling creatures in order to wrath away the opponents board seems pretty impressive. The issue is that after resolving a Living End, oftentimes you have already cycled all of your creatures. Archfiend of Ifnir is also much easier to hardcast than Jungle Weaver, which is another reason why it seems a bit better. Living End clearly has improved here.

#3: Gideon of the Trials

Gideon of the Trials, as a three-mana planeswalker, isn't easy to answer. Yes, it can be targeted by Abrupt Decay, but beyond that and the occasional Maelstrom Pulse, planeswalkers are much more difficult to get off the board compared to ordinary creatures. Gideon of the Trials provides early pressure, but it can also protect your life total immediately. The plus ability can target any permanent, so Gideon of the Trials is a way to actually stop an opposing Gideon, Ally of Zendikar from hitting you. This will be an important interaction in both Standard and Modern. 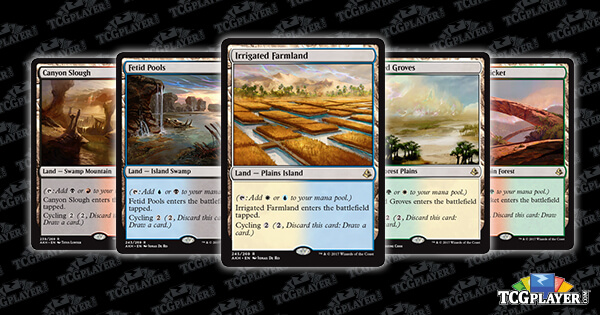 The cycle lands should see play in Modern control decks and decks that play lots of lands in general. These are the decks that tend to want to play a long game, and being able to turn a land into a fresh card is great. There are also fringe decks with Life from the Loam which really want cycle lands as a way to dig through the deck. The fact that the cycle lands are fetchable means that you will likely see one or two copies alongside the fetch lands that can find them. For decks that want to curve out, the cycle lands won't be worth considering.

Modern is a faster format than Standard, which makes a land that comes into play tapped even more of a liability. Think of the cycle lands similarly to the creature lands that get played in the midrange and control decks.

Of all the cards in Amonkhet, Harsh Mentor is the one with the most potential in Modern. Remember that this card deals damage to the opponent off cracking a fetch land, which makes every fetch a Lightning Bolt. Harsh Mentor could see play in Red-White Hatebears, Blue-Red Delver, and of course Burn. This card wants to be in decks that have other cards dealing the opponent damage, so that the damage Harsh Mentor is dealing becomes more relevant. I have been asked about whether there should be four Harsh Mentors in Burn, and there are a couple variables that go into the answer.

Harsh Mentor has the potential to be great, for instance against Affinity or Lantern Control that want to activate artifacts all the time, and it becomes comparable to Stony Silence alongside lots of direct damage. There are certain matchups where Harsh Mentor will be absurd. However, it is competing with Eidolon of the Great Revel, another premier two-drop. I think Burn may want to add another land if it's going to play eight two-mana creatures, because they need to come down on turn two to be most effective. Right now, I'm trying two Harsh Mentors main and two in the sideboard, since they are a bit more matchup-dependent than Eidolon of the Great Revel.