Phantom Rage drops today at retailers across the globe, and we have your look at the best-selling cards from pre-sales.

Dark Xyz combo decks are one of the biggest centerpieces of this release, and since Phantom Knights have a long competitive heritage in Yu-Gi-Oh it's no surprise that cards related to those combo decks were some of the set's biggest bestsellers. Prank-Kids were also an obvious pick as key cards for the strategy have been seeing big sales for weeks.

But beyond that the trends were a little more surprising: Myutants were a HUGE hit in the pre-sale period here on TCGplayer, taking up almost half of the Top 10! That left one of the set's other new strategies batting cleanup, and we can dive right in to show you what it was. 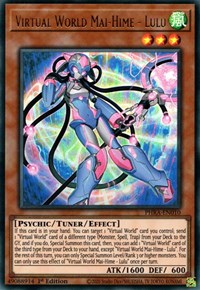 Virtual World may turn out to be the strongest of the rogue strategies from Phantom Rage, but the deck saw mixed interest from the secondary market in pre-sales. That said, the theme's priciest cards did the best: Virtual World Mai-Hime - Lulu made the cut at Number 10, the theme's second most valuable card. The more expensive and more generic Virtual World Kyubi - Shenshen was notable at Number 11 too, while Virtual World Phoenix - Fanfan clocked the Number 14 spot.

Virtual World's definitely played second fiddle to several other strategies, but if Myutants stumble out of the gates we might see more spotlight on Lulu and the rest. 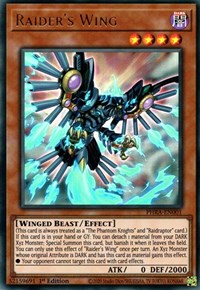 A free, flexible extender for combos that involve Dark Xyz Monsters, Raider's Wing is an auto-in at 3 for lots of Raidraptor and Phantom Knight decks, as well as Blackwings and a variety of lesser rogue themes. If you can run it and support it, you probably should. It's not an overly complicated card, but it's a simple Level 4 that pops back into play from the Graveyard for virtually no cost, without creating awkwardness if you draw it.

I'm actually kind of surprised to see Raider's Wing at "only" Number 9 in pre-sales, especially with other Dark Xyz combo cards so high up in the pre-seller ranks. 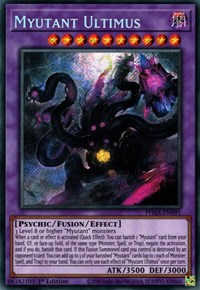 Myutants were the topic of major hype and a lot of heated debate, even before we saw what the cards did. Once they were revealed, it seemed like lots of players were interested in the theme, and sure enough the bullish outlook translated to big pre-sales: Myutants captured four of the Top 10 spots, and it's impressive to see Myutant Ultimus landing at Number 8 given the card's price tag; it's not expensive, but it's not a 5 cent common either and it outsold dozens of cheaper cards from Phantom Rage.

Myutant Ultimus is huge, easy to summon, self-replacing, and wields a powerful negation effect, which makes it at least promising as a boss monster. Whether Myutants can truly compete beyond the rogue level is still a question we don't have an answer for, but there were many buyers who were willing to gamble on the strategy this week. 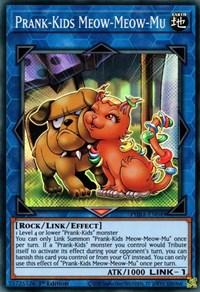 From the experimental to the guaranteed, Prank-Kids are a former Championship-winning deck that's set to make a big comeback off Phantom Rage and it's all because of this card. We started talking about the market trends Prank-Kids were kicking off two weeks ago, when Thunder Dragon Fusion started to get bought out for its use with Prank-Kids Battle Butler, and the hype has just continued since.

Loukas called out Prank-Kids Meow-Meow-Mu in his latest Cards Everybody Wants article, and we'll have more on the deck in the coming weeks, but the gist is that Prank-Kids Meow-Meow-Mu status as a Link 1 makes all your hands with just one Prank-Kid monster vastly more playable, giving Prank-Kids the consistency it needs to compete again. At about $2 a pop, lots of players bought in for their playset. 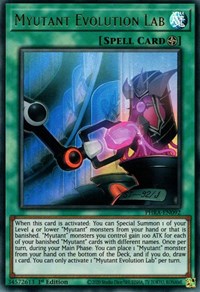 With a Special Summon effect that can nab you immediate card economy, a small ATK boost, and a notable hand filtering effect that works every turn, Myutant Evolution Lab offers a range of smart uses while offering up theme-stamped spell fodder for cards like Myutant Ultimus and the lesser Myutant monsters. It fills a lot of basic needs in the Myutant strategy, and since it's searchable with Myutant ST-46 a single copy's enough in most builds. Given that context it's a bit surprising to see so many players buying multiples, but the price is right, and buyers were covering their bases. 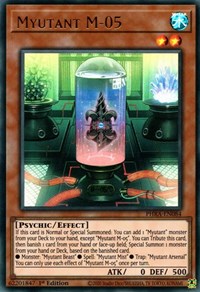 Speaking of the base Myutants, Myutant M-05 is a monster searching Myutant Elemental HERO Stratos with a tribute and banish effect that can Special Summon any of the deck's three Main Deck bosses: those are Myutant Beast, Myutant Mist, and Myutant Arsenal. The card economy here is strong, the search power and consistency is great, and those bigger Myutants sort of feel like giant, easier Koa'ki Meirus, something that's resounded with lots of competitors. It seems unimaginable to run Myutants without three copies of this card, and you can say the same thing about… 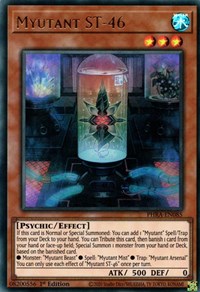 The spell and trap searching counterpart to Myutant M-05, Myutant ST-46 is just as important to the Myutant strategy, and it sold just slightly better. There's no consensus build of a "best Myutant deck" yet, but again, both of these cards are very likely three-ofs since they're so important as combo starters. They offer a lot of options, a lot of synergy, and neither card is over-costed. Meanwhile Myutant GB-88 really just a one-of, and didn't make the cut to the Top 10. 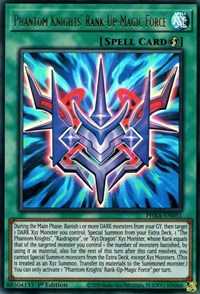 That might sound a little restrictive, but with Xyz on the table like Raidraptor - Arsenal Falcon and Raidraptor - Ultimate Falcon there are plenty of heavy hitters on hand. Check out Loukas' Blackwing deck from yesterday to see Phantom Knights' Rank-Up-Magic Force in action. 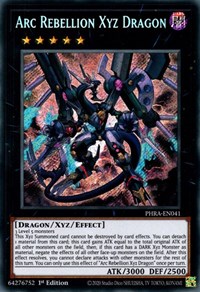 Speaking of Xyz Monsters you'll The Phantom Knights' Rank-Up-Magic Launch and Phantom Knights' Rank-Up-Magic Force into play, the Phantom Rage pack front monster is another solid Secret Rare; Arc Rebellion Xyz Dragon sold like hotcakes at 7 bucks a pop this week. Immune to card effects and easily boosted to game-winning ATK, its negation effect and high power ceiling makes wins in a variety of scenarios where no other card would. This one easily has growth potential, and players were quick to snap it up at what may prove to be a rock bottom price point. 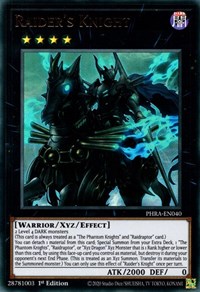 And finally, the mixed theme Rank 4 was the Number 1 best-selling card of the week, not just from Phantom Rage but all of Yu-Gi-Oh. Raider's Knight is an instant Arc Rebellion Xyz Dragon, and when Arc Rebellion Xyz Dragon comes out you'll get to keep it since its effect protects it from being destroyed. Raider's Knight also works with Dark Requiem Xyz Dragon, Raidraptor - Blaze Falcon, or even Raidraptor - Stranger Falcon on the high end, or it can drop down into stuff like The Phantom Knights of Break Sword if that happens to be correct. In general it's going to make wins and really difficult fields out of cheap Dark Level 4s, which are routinely some of the most inexpensive monsters going in combo decks.

That's it for today, but join us tomorrow as we count down the biggest, most impactful cards from Maximum Gold! I'll see you next week, but stay tuned for more awesome articles day after day in this whirlwind of November releases!