Hey there, duelists! Today, I wanted to bring you something light and fun.

Many duelists out in the world love discussing just how incredibly expensive this game can be. Seriously, you want a playset of Eldlich the Golden Lord? That's a pretty penny. But over the course of the game's storied history, there have been some cards that just stand above the rest when it comes to sheer cost. Today, we're going to look at the ten most expensive cards of all time.

Now, before we jump in, I want to clarify a few house rules I have for this list. Right off the bat, prize cards are out. They're expensive by virtue of their extremely limited availabbility, so that's no fun. Furthermore, cards like the iconic Tyler The Great Warrior and the original version of The Seal Of Orichalcos printed for Upper Deck staff's use in Duel The Master events are out. Those were never actually in circulation, so that's not fair either. In fact, I'd wager that most of you reading haven't even SEEN the version of Orichalcos I'm referring to. It's that old and rare.

I'm also specifically going off of TCGplayer listings only. Because I have no shame, and I want to plug the site more.

Lastly, I'm not counting Starlight Rares either, since they're so new and we don't have enough long-term data to actually have their prices set; they don't really work for this piece. And finally we're not going to count misprints or Easter Eggs, because that skews the data further. Perhaps in the future, if you want it, I'll do an article on those crazy things! But not today. 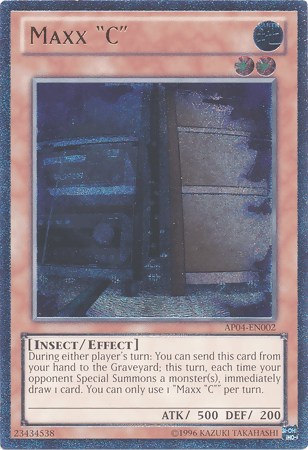 Originally released in Storm of Ragnarok in February of 2011, Maxx "C" finally got a much-deserved upgrade to Ultimate Rare in 2014. A competitive mainstay in its tournament legal lifespan, it sat at a minimum of $100 USD until it was Forbidden. Now, the cheapest copy on the market's an astounding $380.00 for a single Near Mint copy. You could literally buy a set of Eldlich the Golden Lord and have enough money left over for a nice meal, or buy one copy of a card that's led many duelists to howl into the night as they awake from the horrifying nightmares we all have from time to time, reliving the absurd power of Maxx "C".

Let that sink in. This one card, that's currently Forbidden, is more than an entire Adamancipator deck minus Three Tactics Talent. 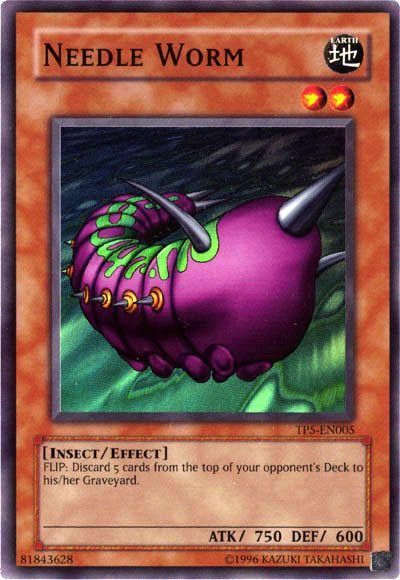 Throughout this article you're going to get an idea of how old I am compared to most players these days, and this is a good example. I remember pulling one of these and thinking it was horrible. Was I stupid? Yes. Did I get ripped off for it? You bet. Am I still upset? My therapist would have you believe so.

Released in March 2003, Tournament Pack 3 was the third installment of the original OTS promo pack series. The original Tournament Packs were atrocious, honestly. Most of the cards were useless, but oh boy was it cool to crack a pack of tournament series cards, even if you'd probably just open jank and be disappointed.

Sitting at a cool $400 Market Price today, I only gave this a spot over Maxx "C'' because there wasn't a single near Near Mint on TCGplayer as of this writing. The average Market Price is all I had to go on, so here we are. I don't really recall ever seeing Needle Worm have true success in competition, but the mere fact that I can consider the question and think back that far reminds me that I am ancient.

Chances are, if you're a competitive player you've heard the tales sung by bards of old, about the days when Book of Moon reigned supreme over us as players, and how skillful of a card it was to correctly use, yada yada yada.

If you're a Goat Control fan (a format from 2005 that Kelly wrote about over here ), you're intimately familiar with one of the most iconic Super Rare cards in the history of the game. Seriously. There are very few cards that are more respected than the CP01 Book of Moon, and its price shows it. The lowest English copy on the marketplace right now is $470, and it's currently for sale from a former United States National Champion, who also happened to win when he was eleven and there was no Dragon Duel for youth duelists.

Which is nothing short of cool.

Fun history lesson for those unaware, CP01 Book of Moon was easier to acquire in German than in English, which is why the English copies hold more value. Which is kind of neat since usually English cards aren't as valuable as their European counterparts. 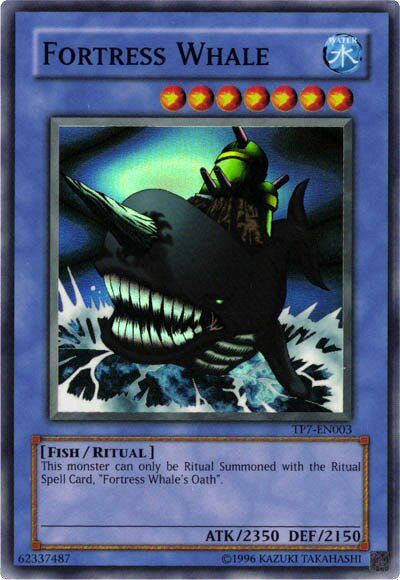 Chances are, most players hadn't ever given Fortress Whale a single thought outside of serious collectors until last year, when it received a Speed Duel reprint and made the playerbase scream in collective anguish that Konami would dare reprint one of the most sought after collector's items in the SAME RARITY IT FIRST APPEARED IN.

For a point of comparison, Blair Hunter's Infernoble deck from the Remote Duel Invitational costs less than this single card. 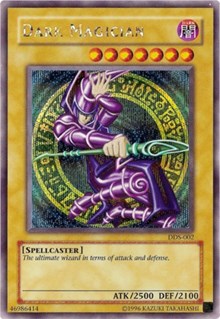 Okay, time to give you all a clue of how old this card is. If you can vote, you might be older than this Dark Magician.

Released as part of a set of promos in the Yu-Gi-Oh! Dark Duel Stories Gameboy game on March 18th 2002, the saddest part is that this uber-sought-after card isn't even the most expensive from that game on this list (shocking).

Having never been competitively viable for most of its run, this Dark Magician was purely collectible until this year. Thanks to Red Eyes Dark Dragoon that changed, and if I ever see someone using a copy of this version I'm going to claw my eyes out because they're playing a $600 engine requirement. That level of flex is just completely unnecessary, and I love it.

I'm going to go cry now, since I sold mine over a decade ago, and I am depressed. 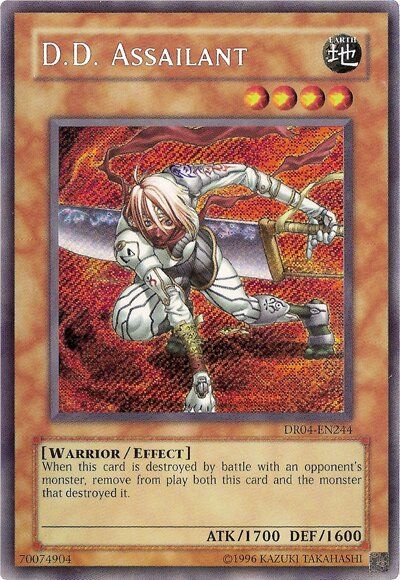 Long ago, before you kids and your new-fangled "Mega Packs", we had to hope that the Dark Beginning and Dark Revelation reprint sets would include our favorite cards. They were effectively the Mega Packs of old, taking hundreds of cards and compressing them into a single giant set.

They always had some gems, but Dark Revelation 4 however, is the true diamond of the series, reissuing many fan favorite cards in rarities that most duelists have never even seen. For example, D.D. Assailant, a huge old school pick and a collectible piece of history, got a rarity boost to Secret Rare in DR04.

The problem? The set was incredibly hard to get due to low supply, and getting those higher rarity cards was even harder. So you have the perfect recipe for expensive cards. How expensive, you might be wondering? Well, you'd be looking at a small fee of $650 to add this version of D.D. Assailant to your collection.

Ya' know. Nothing too major. 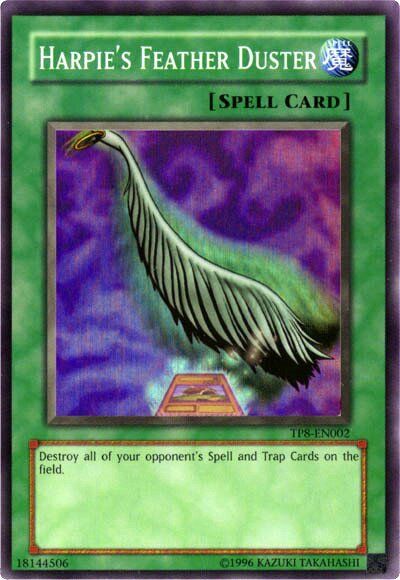 Yet another tournament pack card on the list, this is one of the more recent additions to the treasure trove of collector's items. Always worth a decent amount, Harpie's Feather Duster spiked in the last two years to a jaw-dropping $950.

That single card is a measly $26 less than Ryan Levine's ENTIRE Synchro Eldlich Dogmatika deck. Being the most iconic spell card Mai Valentine used definitely helps its appeal, but being an alternate art version from a Tournament Pack didn't hurt either. How do I feel about all that? 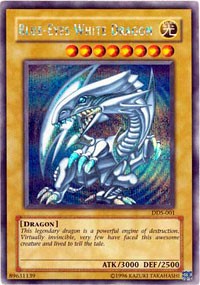 Bringing up the bronze in our list, this is the most iconic card from Dark Duel Stories. There's never been a time in the game's history that this specific version of Blue-Eyes White Dragon wasn't sought after, to such a degree that Kaiba himself would be proud.

Unfortunately, there has been a recent plague on the market of extremely good counterfeits being sold, fooling even some relatively seasoned collectors, so finding a price on a Near Mint copy is impossible. However, you can nab one in moderately played condition for about $750. I can only imagine how expensive a Mint copy of this icon would be. 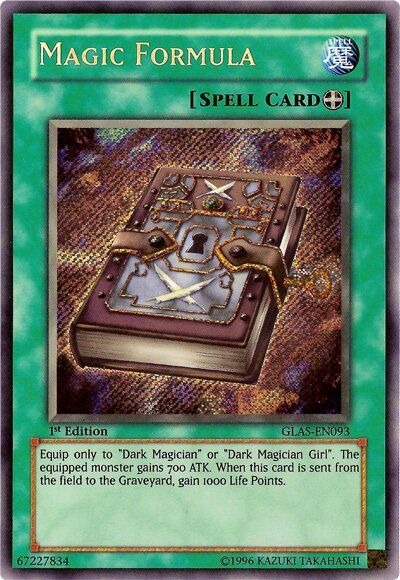 I remember buying one of these for $200 and thinking I was overspending; boy was I wrong. Despite never seeing any competitive play, it was an incredibly hard pull used by the flagship show's protagonist, and that does wonderful things for a card's value.

And finally, we arrive at the crown jewel of the game. 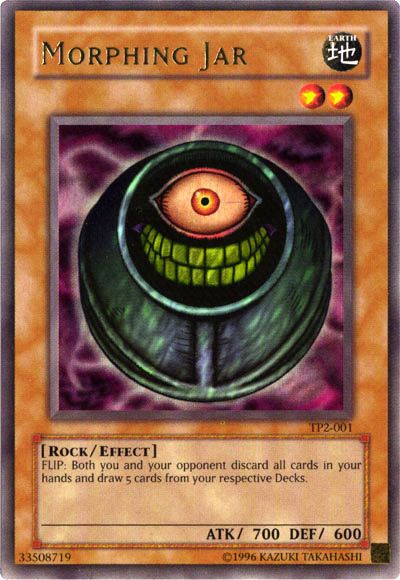 Released in October of 2002, Tournament Pack: Season 2 Morphing Jar is THE most expensive card on this list by a very, very wide margin. Floating in and out of competitive play for years, most players have never actually held a TP2 Morphing Jar, let alone owned one. For an idea of how old you'd have to be to remember this card being in circulation, if you can't rent a car, you definitely weren't around for this. I barely remember it, and I was playing in tournaments constantly.

I remember one night, I was preparing for a local tournament when a fellow collector and close friend of mine called me up at midnight and was stunned. He'd recently bought a Morphing Jar online, and once in a while he'd treat himself to a few TP2 packs for fun. He managed to pull another one out of a pack, which is so rare I can't even put it into words. It might be the single most amazing pack he's ever opened, and he still owns that exact copy to this day.

Let's say you want to buy a copy. Well you'll head over to the Marketplace, look it up and see that the cheapest Near Mint copy is a heart-stopping $3,000. Oh, and that's the only copy available on TCGplayer that's Near Mint and not graded.

That's going to do it for me today! I hope you're all doing well and enjoyed this little trip down memory lane. If you're into this sort of history lesson I'd love to hear about it over on Twitter, so I can write more on these sorts of topics. Also be sure to check out my YouTube channel, which is constantly updated, and will soon feature my next haul of Remote Duel spoils.