Dogs are known for their loyalty–a personality trait that cat owners often find absent in their pets. I don't mean to insult anyone who prefers cats to dogs, but let's face it: dogs kinda have a monopoly on the loyalty thing in the media. 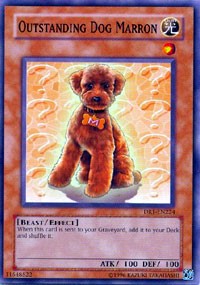 That 'loyal companion' trope finds its way into fiction all the time, including Yu-Gi-Oh. Remember Outstanding Dog Marron, thee common monster from 2003's Dark Crisis? Its effect causes it to return to the deck when it lands in the graveyard–ultimately returning to its owner nearly every time it's played. It's a reference to a famously loyal dog in early 20th century Japan, and this week we're digging into the story of Outstanding Dog Marron as told by various Yu-Gi-Oh cards, as well as the real-life dog it's based on.

The World's Most Loyal Dog

Outstanding Dog Marron's likely a reference to the famous Japanese Akita dog named Hachikō. In the 1920s Hachikō was owned by a Tokyo Imperial University professor named Hidesaburō Ueno, and from 1924 to 1925 Hachikō would await Ueno at Shibuya Station.

Each day Hachikō met Ueno during the commute home, and he soon became a regular face at Shibuya Station. Unfortunately Ueno's time in Shibuya, Tokyo was cut short. Ueno suffered a fatal cerebral hemorrhage at work in May of 1925. Hachikō, as usual, waited for him to return to Shibuya Station that day, but he never came.

Hachikō continued to return to Shibuya Station every day for nearly ten years. His surprising behavior drew the attention of local media, and in 1932 an article about Hachikō made him a national icon. Hachikō received attention, treats, and food from people who passed him on their way to and from Shibuya Station. He died three years later in 1935, but not before inspiring millions with his story. 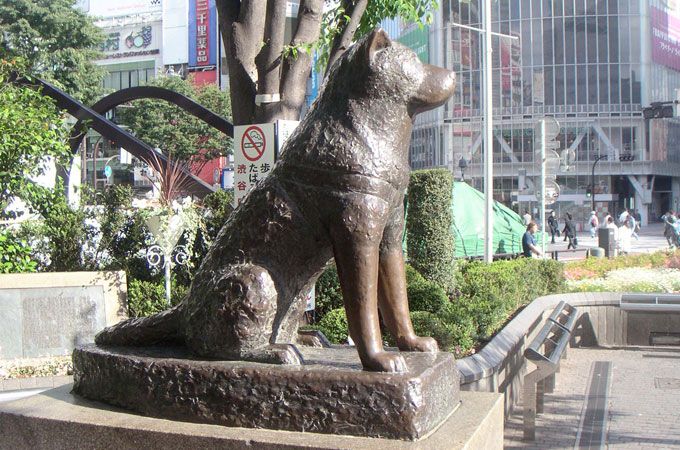 Hachikō's legacy lives on in media, stories, and especially statues located around Japan. The most famous bronze statue lies at Shibuya Station in Shibuya, Tokyo. It's a popular tourist spot and a well-known landmark in the city. It's so well known that Taco Bell–yes, that Taco Bell–created a promotional video using the statue to give directions to their 2015 restaurant opening in Shibuya. The video's seemingly disappeared from the Internet, but I was able to track down the original video thumbnail to prove it happened.

Where Arf Thou? is the clearest link between Outstanding Dog Marron and the story of Hachikō. The spell's art shows Dog Marron's owner searching for it–even putting up missing dog posters–but they're apparently unable to find them. More importantly, Dog Marron is shown ostensibly waiting patiently for its owner in the background. This could be a reference to Hachikō's loyalty to his late owner and his persistence in returning to their usual meeting place. In both cases neither dog was reunited with their owner, but Dog Marron's story becomes significantly more complicated from here on out. 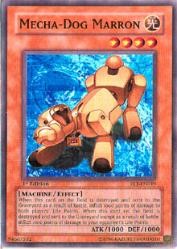 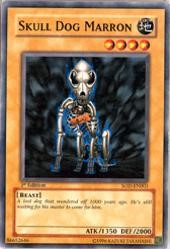 I think there are probably three separate timelines at play: one where Outstanding Dog Marron is corrupted by darkness and becomes Mad Dog of Darkness, another where it's converted into a machine known as Mecha-Dog Marron, and one last timeline where Dog Marron becomes the skeletal Skull Dog Marron. I don't think these forms take place one after another–mostly because the body sizes and compositions of each dog are vastly different from each other. The flavor text of each card also gives us a little bit of a clue as to which circumstances led to each path.

After being lost by his owner in Where Arf Thou?, Outstanding Dog Marron is corrupted and transformed into the beastly Mad Dog of Darkness. 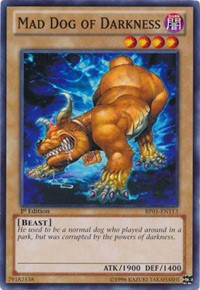 At 1900 ATK it's a serious upgrade from the virtually-unplayable Outstanding Dog Marron, but Mad Dog of Darkness is missing all the features that made Dog Marron so adorable in the first place. Armed with ears that have now twisted into horns, as well as claws and teeth that can finally dish out serious damage, Mad Dog of Darkness is a surprisingly capable card that even made an anime appearance in Yu-Gi-Oh! GX. Look closely and you can see that its old tag still dangles beneath its neck–a remnant of a long-forgotten time.

Behemoth the King of All Animals is a terrifying beast and an apparent powerhouse in the Yu-Gi-Oh world. At least, it seems tough, especially with Mad Dog of Darkness cowering behind it in Behemoth's card art: if you squint hard enough you can just pick out its face peeking out from behind a cliff. 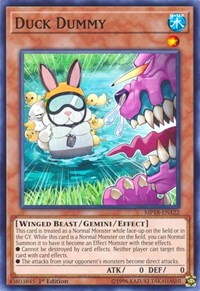 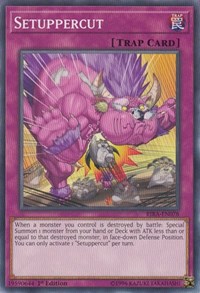 I think Mad Dog of Darkness is being a little too cautious here: Behemoth is often a punching bag for weaker Beast monsters, as shown in Cross Counter, Duck Dummy, and Setuppercut.

Mad Dog of Darkness and Mecha-Dog Marron share virtually identical poses, and of course the same color coat and name tag. They differ in just about every other sense: Mecha-Dog Marron a committed protector and brave fighter at the behest of his owner, and his self-sacrifice might end up saving his owner one day.

Its protective program is known as Half Guard, an anime-only trap card that appeared in Yu-Gi-Oh! ZEXAL. The pairing of a protective trap with a monster that wants to be destroyed is a little odd from a gameplay perspective, but it makes more sense in the context of the lore. Mecha-Dog Marron designed to be a loyal guardian, not full-time bait for spells like Fissure.

In another timeline, Outstanding Dog Marron left waiting for his owner for a thousand years. In that sequence of events he becomes Skull Dog Marron, a skeletal version of his former self. The story isn't as sad as it might seem: Skull Dog Marron soon ends up with a new family of Skull monsters. 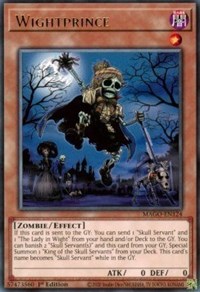 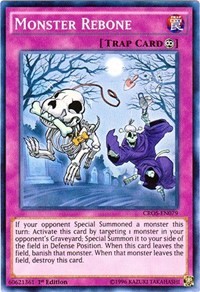 Wightprince and Monster Rebone show Skull Dog Marron enjoying life with his new family, although Wightprince could afford to be a little gentler with the leash. In Monster Rebone we see Dog Marron taking advantage of his owner's skeletal bodies by doing what dogs do best: running away to chew on a bone.

The macabre family of Wights even take Skull Dog Marron with them on vacation, but they run into trouble dealing with customs. In There Can Be Only One we see the Wights interrupted by security and being told that only one of something can be taken with them. Given the card's effect we can imagine that only one Zombie is allowed through, but there's one more card we need to look at. 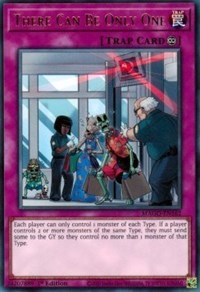 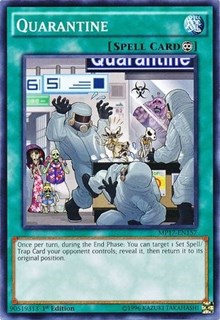 Take a second look at the art of Wightprince and see if you can spot the second Wight family pet in the background. That's right: the Wights own a second skeletal pet! The other interpretation of the scene in There Can Be Only One is that the Wight family's being told that they'll need to leave their second pet behind.

That other pet comes into play in Quarantine, where both Dog Marron and the other undead pet in some sort of dress are being assessed as a possible contaminant. These events aren't happening in the same day–you can see that the Wight family has different outfits on–and technically Quarantine was released before There Can Be Only One. Maybe their second pet, either a cat or another dog, was left behind anyways for the vacation shown in There Can Be Only One. In either case, it's worth noting that while Skull Dog Marron brought along on the Wight family vacations, the daughter of the family isn't.

Wightprincess is the presumptive owner of the second Wight family pet. In Wightprincess art that unnamed pet appears to be incredibly similar to Skull Dog Marron, which implies that there are many undead dogs in the Yu-Gi-Oh world. A scary thought, but both animals seem to be enjoying their new lives. Bone Mouse, an OCG-only Normal monster from 1999 also makes a showing here. 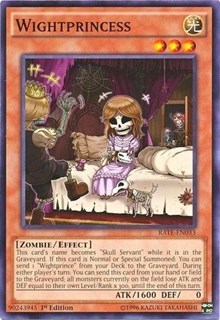 From Wightprincess art we can make a few guesses about the family's state. The second pet was likely purchased as a gift while the family was on vacation, and Whiteprincess is probably bedridden given the other clues in the scene, namely The Lady in Wight bringing her food to her bed.

Susprisingly, Outstanding Dog Marron undead timeline might actually be its most wholesome. It's an integral part of a new family, and it even has a playmate. Heck, several playmates if you consider its affinity toward bones. Dog Marron's eventual ownership by the Wight family seems like a best-case scenario for a dog that had previously wandered for a thousand years. While Hachikō's loyalty to his owner was ultimately never rewarded, Dog Marron's patient waiting finally came to an end when he was adopted into the only family that could truly understand him.