Every good story consists of three elements: the beginning, the middle, and the twist.

These were their weapons of war:

Now as this was the beginning one might be permitted to proceed with an assumption or three (but you know what they say about assumptions).

On their faces these are two very offensively oriented decks. Joel's in particular packs fourteen one-drops, including the much reviled Firedrinker Satyr. He really wants to get the party started early, and burn the venue down in a drunken spray of hoofpints and intestinal Immolation.

While somewhat less aggro than Joel's, Neal's version of the Red Deck was still quite offensively oriented with one-drops of his own and many burn spells to help finish a game. This combination of superficial observations might cause the first time viewer to assume Joel v. Neal would be a straight Brawl, two strong men landing unprotected shots to the other's face, until one simply falls down in a puddle of loose skin and orbital fractures (you know, like Don "The Predator" Frye v. Yoshihiro Takayama in 2002).

...but strategically nothing could be further from the truth. While both decks have powerful -- and potentially risky -- offensive elements, their burn cards remain both fast and quite flexible. The red deck mirror is often more a matter of offense suppression more than offense of your own; and timing more than trying to just kill the other player.

This is especially true in sideboarded games when a Planeswalker like Joel can Remove his Firedrinker Satyrs (sacrificing "2/1-for-one" offense for greater means of self-preservation) and a Magician like Neal can get bigger to put that twist on the script.

This brings us to...

Going into the third game of the RDW mirror, Joel and Stephen were split 1-1. History tells us Joel eventually won the match, en route to winning the Pro Tour entire.

The commentary might reasonably have you focused on one of two very similar, consecutive plays where a Joel - long on lands but dwindling in hand - pressed Stephen with a dashing Lightning Berserker, forcing him into both a corner and the crucible of decision.

In the first instance, coming off of being jammed up on lands, Neal is able to get Thunderbreak Regent in play. Joel triggers his own Eidolon of the Great Revel to dash Lightning Berserker, offering a trade: 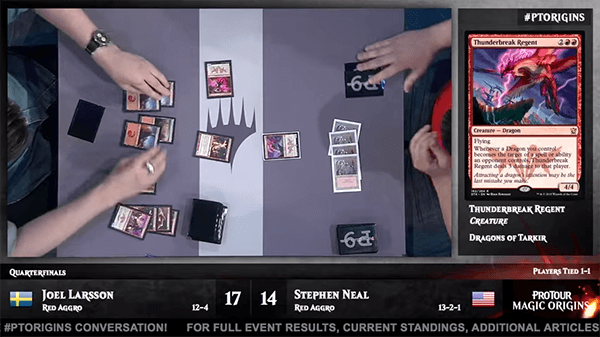 Loathe to exchange his powerful 4/4 flyer for a mere Lightning Berserker (a card Stephen didn't even think enough of to play four of) -- especially with Joel running out of materiel -- Neal eats this first big shot.

Stephen misses his fifth land drop but follows up his first four with a second -- and maybe more important big spell -- Outpost Siege. This time when Joel offers up the Lightning Berserker dash, Eidolon of the Great Revel comes along for the trip to The Red Zone. 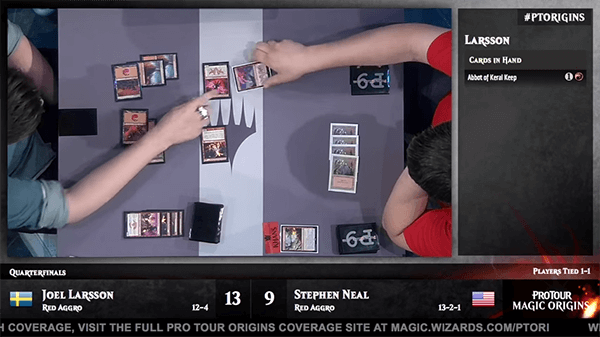 The Red Zone; today in Monored.

Loathe this time to surrendering more-than-a-Fireblast worth of life total, Neal makes the Thunderbreak Regent trade the second time it is offered.

Outpost Siege or no, able to answer or no, card advantage or no, Neal ends up too low in life total, succumbing to the eventual champion following a few short moments.

The interesting matters here are around both players' strategies. In terms of cardboard Stephen had the advantage. Not only is his deck better heads up (no Firedrinker Satyr to start being the biggest of the differences), but he actually drew his sideboard cards!

At the beginning of game three there is a small dispute with Joel attempting to go first (like you usually do when you get to choose). But Stephen was supposed to go first!

It is actually unclear who is "supposed" to go first, strategy-wise. If you think the matchup is about removal and small threat suppression, going second gives you a small edge in card advantage (you draw one more card); where you can covert a small edge in cards to being slightly up after an early exchange. This has been an operating guideline since the time of Dave Price, but our camp actually thought going first would be correct against Joel's particular red deck configuration. From Joel's perspective this could be even more true than usual as he brought in Eidolon of the Great Revel. Eidolon of the Great Revel is surprisingly good in the mirror even though many assume it is a symmetrical card in a matchup where both players have to be damage conscious.

That said Eidolon of the Great Revel is much Much MUCH better on the play than on the draw. Think about it like this: if you are dictating the pace of the game, adding a "take two" tax to your Grizzly Bears threat is awesome! The opponent is going to have to deal with it to catch up, so making him take extra is like sprinkles and whipped cream. But if you are behind already and trying to stabilize, adding a "take two yourself" tax limits your ability to defend; which is not really an attractive feature in a sideboard card.

Regardless, Joel's decision to go second was not only strategically superior, it worked out perfectly in this game, practical-wise.

As we've already said, Neal had the better configuration heads up. Swapping Eidolon of the Great Revel (a "surprisingly" good card) for the awful Firedrinker Satyr just moved Joel closer to even, to cards Neal started off just playing-playing. On balance Stephen was dropping so many sideboard bombs the table might not hold beneath their weight.

Outpost Siege and Thunderbreak Regent will sway many-a-game. Thunderbreak Regent isn't as invulnerable as one might dearly wish against an opponent with multiple "deal four" burn spells...but in addition to its still-relevant size and evasion, the Dragon also has a sweet Eidolon-like tax that makes removing one expensive in more ways than one.

If anything, Outpost Siege is even better. If you watched my match against Sam Black, you can probably guess how demoralizing it is to play against an unanswered Outpost Siege from the other side.

Outpost Siege is like a Chandra, Pyromaster that doesn't get attacked. If you believe that the mirror is about the suppression of fast threats, life preservation, and timing there is almost no better trump card. If it is pulling lands, at least you're not pulling lands. Plus spreading lands all over the battlefield lets you use your efficient one to two mana response cards liberally while still deploying threats of your own. At some point you just have an overwhelming amount of materiel advantage and they can't keep up.

The problem? Stephen's awesome sideboard cards all cost four! Realizing this he even had a 22nd Mountain to make up in his sideboard!

By forcing Stephen to go first, Joel actually made it harder to hit the sideboard spells that he actually drew, and on time! That extra draw from going second? Might just have been land #4! Subtle, but important here working under the assumption that both players would take a step back in terms of offense... All of a sudden going second was less of a liability for Joel than we usually expect.

Again, the commentators had us focusing on two plays on consecutive Larsson turns:

Could changing up his moves on one or both of those turns have turned the tide for Stephen?

I'd actually like to start with the second of the two turns, because I think the play is more intuitive.

Here Stephen was able to untap with his Thunderbreak Regent and follow up with an Outpost Siege. The booth asked if he was willing to block this second time (and he was).

Stephen was really jammed up on fours this game. He missed his fourth land drop for a turn; and even having deployed a Dragon and a Siege he still had another key four in grip: Stoke the Flames.

What play does Joel make if Stephen leaves up RRRR instead of tapping it all?

Does Joel still Eidolon himself?

Imagine he does...will he still offer both Eidolon and Lightning Berserker to The Red Zone?

I think given his draw Joel is likely to still dash if Stephen has RRRR up. Doubtful he sends Eidolon of the Great Revel [too], though. If he does Stephen should block the Eidolon, daring Joel to do his worst, and then Stoke if it makes sense.

In the more likely case that Joel only attacks with his Lightning Berserker, Stephen should block, which gets Joel to pour his mana into the daring dasher as he did IRL; life gets really easy for Stoke the Flames there, and Stephen gets a free Time Walk...without even triggering Mr. Of The Great Revel. Outpost Siege comes online one turn later, but Stephen is in a much better place to use it, with both his giant blocker and a little more life total intact.

Here's the thing about Outpost Siege: it's amazing going long heads up. But while it is one of several ways to earn card advantage, life points are precious and not so easily recoverable (there was a point that we also had a sideboard land to support our extra fours...and it was Radiant Fountain). This line uses a four mana spell to trade for a one mana spell (but implies an extra three plus mana tax), but retaining the Thunderbreak Regent for defense short term (and offense someday) while getting a personal Howling Mine online likely puts Stephen in a position to win.

This is the first of the two plays, the first time Joel offered Lightning Berserker (and mana) for the life of Thunderbreak Regent. The question at the time was "should he block?" and I think it is understandable why he didn't. Not only is Thunderbreak Regent a better card than Lightning Berserker at this stage, the prospect of not collecting the targeting tax must have felt super spitty.

Knowing what we know now though (that Stephen would end up blocking the next turn to trade anyway) the earlier trade would have saved him some valuable life, so it might have been advisable. Blocking a turn earlier, while painful v. expectation, might have gotten Neal to a similar place, but with a whole Stoke the Flames extra handicap around his opponent's neck.

A Sliding Door it probably wouldn't have been fair to open would be Outpost Siege over Thunderbreak Regent to start. Part of the allure of the Thunderbreak Regent play is that it keeps Eidolon of the Great Revel at bay; the same cards from Joel's side would have put Stephen to eight (with an Eidolon still on the battlefield), or "overwhelmingly likely to die in the next few turns."

Ultimately there are many lessons to take from this match. Joel converted the win despite having generally weaker draws; again, his strategy was excellent. Neal drew the cards he wanted, but didn't have the time he needed. As great as he was to that point in Vancouver, Stephen just had to manage more, and more kinds of, scarce resources to win.