Two weeks ago, I made Top 8 of Grand Prix Louisville with the Legacy version of Death and Taxes. Then last weekend, I made the semifinal of the Magic Online Championship Series Playoff with the Modern version of Death and Taxes. Today I'm going to talk about how to play the deck in each of these formats as well as what each of the two decks gained from recent expansions. 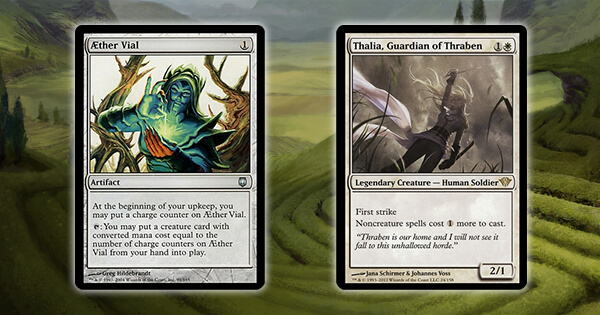 Death and Taxes in Legacy

Death and Taxes has been my go-to deck in Legacy for years, ever since Thomas Enevoldsen first turned me onto it. Thomas gave me his updated list and sideboard notes, so I went with it, just like I did at Grand Prix Washington DC a few years ago. Just like in D.C., I made Top 8 again! Here is the list I played:

The three newest additions to the deck come from Conspiracy: Take the Crown.

Palace Jailer allows us to become the Monarch while exiling a creature. You can also target it with Flickerwisp to exile another creature since the creature only returns when someone else becomes the Monarch, in contrast to Banisher Priest-type cards where the creature returns when the namesake card leaves the battlefield. Being the Monarch allows you to draw a card for free on each of your end steps, which can be a very powerful effect in any slow matchup but can also backfire if the opponent ever overthrows you, which is exactly what Brian Braun-Duin did to me in our quarterfinal match in Louisville.

Sanctum Prelate allows us to lock out some strategies by essentially functioning as a Chalice of the Void on whatever number we want. It can also provide a soft lock against a variety of strategies that rely heavily on cards of a certain casting cost, such as Delver of Secrets decks relying on resolving a bunch of cards with converted mana cost of one. It's a nice bullet to find off the final addition, Recruiter of the Guard.

Recruiter of the Guard is an excellent way to generate card advantage while also providing us with a consistent way to find answers to problems the deck otherwise doesn't have access to, especially in the main deck. It can be our way to find Sanctum Prelate against combo decks or Mirran Crusader against Sultai decks. It can also find Phyrexian Revoker against Sensei's Divining Top decks. With Mother of Runes around to protect such creatures from removal, their impact on the game is often insurmountable. Aside from being a tutor for bullets, Recruiter of the Guard is also a way to generate pure value in the grindy matchups. You can search out Flickerwisp since it searches for toughness two or less, not mana cost two or less, and then blink the Recruiter with the Flickerwisp to find another Flickerwisp and repeat this process until you have all four copies of Flickerwisp on the battlefield. It's like Squadron Hawk for Flickerwisps!

There are tons of viable decks in Legacy, but these are the top 20 or so matchups you could expect to face and how to sideboard against them. I also included what to typically name with Phyrexian Revoker as that is often a big question, especially when having to do so in the dark. Most of these notes are courtesy of Thomas Enevoldsen who in my estimation is the foremost expert in the world at the archetype. Between the two of us, you can be sure you're getting good advice about the deck!

Out: 4 Swords to Plowshares, 1 Mirran Crusader, 1 Umezawa's Jitte, 1 Plains (on the draw)

Out: 2 Recruiter of the Guard, 3 Phyrexian Revoker (on the draw remove Sword of Fire and Ice)

In: 1 Rest in Peace, 1 Relic of Progenitus, 1 Council's Judgment, 2 Path to Exile (on the draw, add the second Councils judgment)

Out: 2 Recruiter of the Guard, 3 Phyrexian Revoker, 1 Sword of Fire and Ice

In: 1 Rest in Peace, 1 Relic of Progenitus, 2 Council's Judgment, 2 Path to Exile

Out: 2 Recruiter of the Guard, 3 Phyrexian Revoker, 1 Sword of Fire and Ice

In: 1 Rest in Peace, 1 Relic of Progenitus, 2 Council's Judgment, 2 Path to Exile

Out: 2 Swords to Plowshares, 1 Flickerwisp, 1 Mirran Crusader (on the draw remove 1 Thalia instead of Crusader)

Revoker names: Stoneforge, Jitte or Jace, depending on what they find (name Stoneforge if they find Batterskull, jitte in most other scenarios). Jitte on True-Name Nemesis is what kills us, so that is no. 1 priority. Jace is more easily beatable, but look out for it.

Revoker names: Really situation-dependent: if you don't have Stoneforge, name Jitte, otherwise think of what you want to draw vs. what you can't have them draw to make a decision.

Revoker names: Sneak Attack or Griselbrand depending on the board. Usually Mother plus Revoker plus Karakas is game over, but sometimes you need time to set that up, and you go for Griselbrand first. They may have Jace or Lavamancer or Explosives after board.

Out: 1 Sword of Fire and Ice, 4 Thalia, 4 Flickerwisp (on the play only take out three Thalia)

In: 1 Needle, 2 Council's Judgment, 2 Containment Priest, 2 Path to Exile, 2 Ethersworn Canonist (on the play no Needle)

Revoker names: Heritage Druid, Wirewood Symbiote, Deathrite Shaman. Most important is shutting down their acceleration. After that you shut down Symbiote, so you can connect with Jitte, which is your main plan

In: 2 Gideon, 1 Rest in Peace, 1 Relic of Progenitus, 2 Council's Judgment

Out: 1 Sword of Fire and Ice, 1 Mirran Crusader, 1 Spirit of the Labyrinth, 3 Phyrexian Revoker, 1 Batterskull

Out: 1 Phyrexian Revoker, 2 Flickerwisp, 1 Spirit of the Labyrinth

Out: 1 Spirit of the Labyrinth, 1 Palace Jailer, 1 Sword of Fire and Ice

In: 2 Path to Exile, 1 Council's Judgment

Out: 1 Sword of Fire and Ice, 1 Palace Jailer, 3 Phyrexian Revoker, 1 Spirit of the Labyrinth

Out: 1 Spirit of the Labyrinth, 1 Sword of Fire and Ice, 1 Sanctum Prelate, 1 Mirran Crusader, 1 Serra Avenger

Out: 1 Sanctum Prelate, 1 Recruiter of the Guard, 2 Thalia (on the play remove 3 Thalia and keep the Recruiter)

In: 2 Path to Exile, 2 Council's Judgment

Out: 1 Mirran Crusader, 4 Swords to Plowshares

The one change I would like to make is to replace Relic of Progenitus with a second copy of Rest in Peace as that card is especially good and important in a variety of matchups that rely on the graveyard, especially the Lands matchup. Lands is the deck I struggled with the most at the Grand Prix, so getting slightly more help there by adding the second copy of Rest in Peace is quite welcome.

However you build it, this deck is by far my favorite and I don't plan on putting it down anytime soon. Because of it, I look forward to the annual domestic Legacy Grand Prix.

Death and Taxes in Modern

The Modern version of the deck is similar in that it's a mana denial deck that leverages Aether Vial to gain a tremendous tempo advantage on the opponent. It doesn't have access to Wasteland or Rishadan Port, so it uses Ghost Quarter and Tectonic Edge. To make Ghost Quarter as good as (or better than) Wasteland, it uses Leonin Arbiter to turn it into Strip Mine! The cat is good in Modern regardless of its synergy with Ghost Quarter given the amount of shuffle effects in the format, particularly fetch lands. It also turns Path to Exile into turbo-charged Swords to Plowshares.

Basically, Leonin Arbiter turns the Modern version into a powerful Legacy deck fighting against a bunch of Modern decks. You don't get Mother of Runes or Stoneforge Mystic, but you can still go crazy with Flickerwisp. You can actually go crazier since the deck runs Restoration Angel, though you don't have Recruiter of the Guard to turn on the Squadron Hawk mode of Flickerwisp.

The biggest innovation made recently was Thraben Inspector. The green-white version has Noble Hierarch as a one-drop to put onto the battlefield from Aether Vial on the second turn, but the best the mono-white version could do was play Judge's Familiar. Thraben Inspector wildly overperformed for me in testing and in the tournament. If you don't have a two-drop creature after your first turn Vial, you can tap the Vial to put Thraben Inspector onto the battlefield and then immediately sacrifice the clue with your two mana. Or when you play out your Flickerwisp or Restoration Angel just to get a flier onto the board to pressure the opponent, you can incidentally blink the Thraben Inspector to make a clue. Then, if you keep drawing gas you'll win the game, but if you start flooding out, the clues essentially act as extra Horizon Canopies to keep the engine rolling. Ideally you want to be blinking Blade Splicer to make Golem Tokens (aka the best Etched Champion blockers in the format), but getting a clue is highly underrated. It's actually quite good in this deck. I'm confident enough to call it the best white one-drop in Modern (outside of Soul Sisters).

I would consider replacing Honor of the Pure with Smuggler's Copter, though that would give us a lot of artifacts, which makes our Stony Silences worse. I would also consider replacing the one Grafdigger's Cage in the sideboard with a third Rest in Peace if you expect more Grixis Control than Collected Company decks. I suppose those were the two decks that faced off in the final of the MOCS playoff, so maybe cut something else instead to make room. Either way, the deck is powerful and only got better with Thraben Inspector. Hall of Famer Olle Rade went 5-0 in a league with my exact same list the following week, so others are beginning to replicate my success with the newest hotness in Modern White Weenie decks – Thraben Inspector. It shouldn't take long before others start catching onto the power of Death and Taxes in Modern as they already have in Legacy.