You might have noticed that the OCG's been revamping old Structure Decks lately, refreshing those strategies with new cards.

They're easy to miss among all the Toon, Chaos, and HERO cards in the set, so this week I want to take a closer look at each of them while focusing on the Structure Deck's star, and one of the biggest pulls from Toon Chaos: Immortal Phoenix Gearfried. 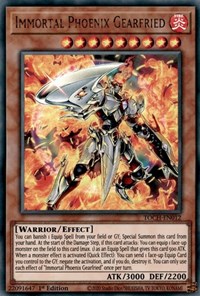 The cover and boss monster of Structure Deck R: Warrior's Strike is an impressive improvement over the original Phoenix Gearfried. The new Immortal Phoenix Gearfried isn't a Gemini, but it does rely on Equip Spells like its predecessor.

Gearfried has three relevant effects: first, you can Special Summon it from your hand by banishing an Equip Spell from your hand or graveyard. That's an awfully generous summoning condition, especially because Equip Spells that land in the graveyard tend to stay there for the remainder of the duel. Lately I've been playing a lot of Plunder Patrolls, and after I resolve Emblem of the Plunder Patroll I'll rarely have any more interaction with it. If you can dump Equip Spells into the graveyard why not tap into a resource that isn't useful otherwise?

There's a lot to love about Immortal Phoenix Gearfried's trio off effects, and its stats are also equally impressive. At 3000 ATK, or 3500 with an equipped monster, you'll be safely attacking over most of the game's monsters. That ATK becomes especially dangerous when it's combined with Immortal Phoenix Gearfried's second effect, which lets it destroy two monsters, pump up its own ATK, and add fuel for its monster negation effect. Immortal Phoenix Gearfried's kit makes it a fantastic aggressor, and at Level 9 it has synergy with True King of All Calamities and World Legacy Monstrosity. The question is: what decks can support summoning it in the first place?

It's important to remember that you don't actually need to equip Immortal Phoenix Gearfried with any cards yourself. Immortal Phoenix Gearfried can equip cards using its second ability, but it can send any Equip card to the graveyard to negate a monster effect. Let's take a moment to check out the Official Rule Book for a bit of context on the difference between an 'Equip Spell' an 'Equip Card': 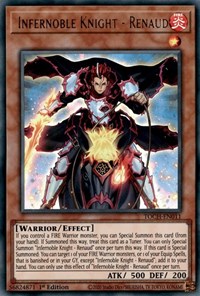 So you just banished your Equip Spell in the graveyard to Summon Immortal Phoenix Gearfried – now what? Infernoble Knight - Renaud has the answer!

Because you control a Fire Warrior monster you can simply summon Infernoble Knight - Renaud from your hand and activate its effect to recycle a Fire Warrior or Equip Spell that's banished, or in your graveyard. Infernoble Knight - Renaud's not as flexible as Immortal Phoenix Gearfried – you'll only have consistent access to its effect in a dedicated Fire Warrior deck – but its costless Special Summon, role as a Tuner, and its +1 on Summon all make it a fantastic introduction to the Infernoble theme and a great compliment to Immortal Phoenix Gearfried. 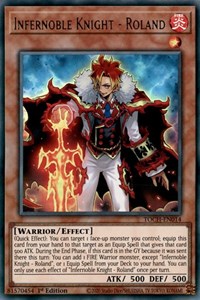 Conveniently, Infernoble Knight - Roland's effect activates regardless of how it ends up in the graveyard, so you could use Foolish Burial to send it from the deck to the graveyard, or just discard it with another effect to search Infernoble Knight - Renaud or Immortal Phoenix Gearfried during the End Phase. Both Infernoble monsters are just a small taste of what's to come in Rise of the Duelist. They're worth picking up if you're planning on playing the deck later this year. 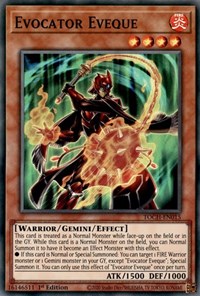 Geminis are an odd breed of monster cards aren't quite Normal Monsters, but also require an extra Normal Summon to gain their effects. Evocator Eveque is an updated take on Evocator Chevalier with a much more impressive effect: if Evocator Eveque's Normal or Special Summoned its effect lets you Special Summon a Fire Warrior or Gemini monster from your graveyard. Naturally Immortal Phoenix Gearfried is a top target for its effect, and luckily Sublimation Knight can expedite Immortal Phoenix Gearfried's journey to the graveyard. 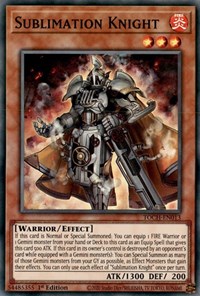 Speaking of, Sublimation Knight's another new piece of Gemini and Fire Warrior support that can equip either kind of monster when it's Summoned. Its second effect is difficult to trigger, but it can let you Summon an equipped Evocator Eveque to Special Summon Immortal Phoenix Gearfried from the deck.

For the most part I'd plan on never resolving Sublimation Knight's second effect, and instead focus on using it to equip something that you want to land in your graveyard like Infernoble Knight - Roland. 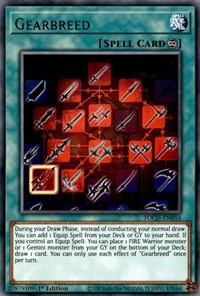 Gearbreed's a little slow to get started, but it does replace itself with a fresh draw if you have a Fire Warrior or Gemini in your graveyard and you control an Equip Spell. For every turn after, you can use its effect to trade your normal draw for an Equip Spell from your deck or graveyard. Historically effects like that have rarely been worth it, but the fact that Gearbreed produces an extra draw each turn by recycling monsters is a game changer.

Unfortunately it's only viable in a small number of strategies, including Infernobles. But there's a good chance that future Gemini strategies will get a lot of mileage out of this card, and it could become a big pick in TCG builds of Infernoble at some point. 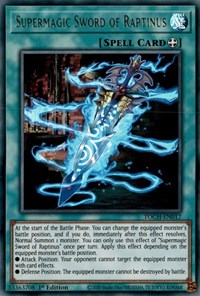 So how about an actual Equip Spell in a set with so much support for Geminis and Equips? Supermagic Sword of Raptinus is extremely interesting and potentially very strong in decks that already want to play a variety of Equip Spells. Supermagic Sword of Raptinus can grant its controller another Normal Summon if you change the Battle Position of the equipped monster at the start of the Battle Phase. The beginning of the Battle Phase isn't a great time to summon a monster, but a second Normal Summon's pretty tempting.

In the meantime an Attack Position monster equipped with Supermagic Sword of Raptinus cannot be targeted with card effects, which could save it from negation or targeted removal. Unfortunately Supermagic Sword of Raptinus is hard to play outside of dedicated going-second strategies since you won't have a Battle Phase to enter on the first turn, but it's definitely worth keeping an eye on going forward. There aren't many cards that generically provide extra Normal Summons, at least not cards that are still legal. 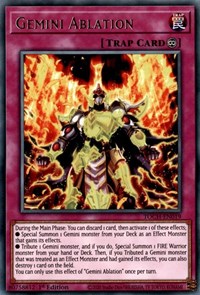 Gemini Ablation's the last Gemini-specific support card in Toon Chaos, and I have a warning for you: don't sleep on this card just because it's a trap. Gemini Ablation's first effect Summons a Gemini from the deck with its effect active, letting you Summon Evocator Eveque and then bring up Immortal Phoenix Gearfried from the graveyard immediately. Or you could Summon Gigaplant from the deck to launch any number of combos involving Lonefire Blossom. Gemini Ablation plays a bit better with Fire Warriors, and specifically Gemini Fire Warriors, thanks to its last effect which can grab Immortal Phoenix Gearfried from the deck directly.

Okay, there's actually one last card to discuss. Cross Over's the last new card from the OCG Structure Deck, but it's not specifically built for Fire Warriors or Geminis. Instead, Cross Over's monster removal designed to support Warrior themes. It's best played with, you guessed it, Immortal Phoenix Gearfried to set up cards for its Special Summon or negation effects. Either way, Cross Over's solid removal tech against monsters with immunity to destruction or those that benefit from destruction. Cross Over keeps your opponent's monsters out of the graveyard, at least until the equipped monster would be destroyed.

The new Fire Warrior, Gemini, and Equip Spell support in Toon Chaos sets the stage for Immortal Phoenix Gearfried today, but down the road you'll see several of these cards show up in Infernoble Knight decks. Immortal Phoenix Gearfried is easily the most flexible card here, and it'll be interesting to see if it ends up being played in a deck like Plunder Patrolls. In the meantime Toon Chaos is your opportunity to get a head start on building Infernoble Knights, or possibly upgrading a casual Gemini build like Chemcritters or – and this is the very first deck I built by buying singles – a Gigaplant-focused Plant strategy.