After three weeks of Ogdoadic domination, Ancient Guardians fell off in a big way.

With no showings for any of the new ANGU themes at the Group A or Group B Remote Duel Invitational Qualifiers , or the latest round of Yu-Gi-Oh! Extravaganzas, it seems like Snake Fever's taken a backseat to a handful of new market trends. Players are returning to the game as locals reopen; they're reacting to the results from those big tournaments; and they're looking ahead to Lightning Overdrive, launching next Friday. 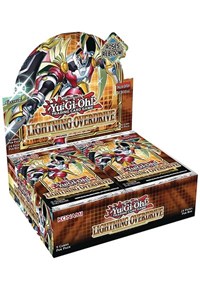 The result is a mish mash of market forces and an eclectic Top 10 list this week, as we look at the best-selling cards by unique buyers, right here on TCGplayer.

The popularity of Red-Eyes Dark Dragoon certainly isn't going down, and with locals opening up in some areas and players returning to cardboard Yu-Gi-Oh, a lots of duelists are playing catch-up on the biggest cards of the last year and a half. Players are always finding new decks to shove Dragoon into, so it's no surprise that demand for Anaconda's surging, even as it approaches the $40 mark. 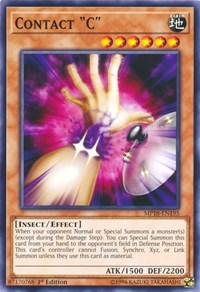 I talked to Hanko a few days before he took 2nd Place at the Remote Duel Invitational Qualifiers. I asked him what he wanted to play, and he said he was thinking Prank-Kids again, but was concerned he'd run into too many people playing this card. That didn't happen, so he made the Finals and scored his invite, but with three of the Top 4 players from the Group A Qualifier getting there with Prank-Kids, and another Top 8 showing over in Group B, players appear to be prioritizing the Prank match-up more heavily.

For perspective, the same number of players qualified for the Remote Duel Invitational with Prank-Kids and Dragon Link. This matchup's no joke, and the result was a big surge of interest in Contact "C" this week.

I hit up Hanko to tell me about the card's utility, because… I mean, why would I not. It would seem dumb to not ask the single most successful Prank-Kids player when he's basically right over there. Hanko explained: "It's good against Prank-Kids at the start of the game, because it stops them from summoning Prank-Kids Meow-Meow-Mu with their Normal Summon." The Prank deck has a few outs to it, but none of them are very good. "You can chain Prank-Kids Pandemonium to make a Fusion, but realistically that doesn't accomplish much and you can't continue. You can get out of it if you play Predaplant Verte Anaconda and perhaps the Red-Eyes Dark Dragoon package, but if you don't play that, Aussa the Earth Charmer, Immovable is an option."

If you don't own Contact "C" now, and you plan to play in tournaments in the coming weeks, you might want to grab them now. The card's already sitting around $2.50, and a lot of people are just figuring out that they need copies.

#8 Apollousa, Bow of the Goddess 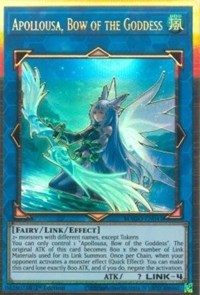 Apollousa, Bow of the Goddess (Alternate Art) was played in roughly half of the Top 16 decks from the May Yu-Gi-Oh Extravaganza, and it sees so much play in such a wide variety of strategies that it's effectively a must-own for competitive players. With two reprints last year, it's doubtful we'll see another one anytime soon, so the price probably won't drop in the near future.

See Predaplant Verte Anaconda at Number 10, and the statement about returning players.

Over a year after its release, Crystron Halqifibrax is working with a restricted cast of partners in crime, but it's still alive and kicking. It's played in some Dragon Link builds now, but may be seeing extra interest for its potential in Drytron moving forward. Will it have a role in Drytron builds with Diviner of the Herald and Drytron Mu Beta Fafnir? I think that's a tough call to make for sure, but it's definitely possible, and investing in Crystron Halqifibrax now certainly isn't a bad move: it's currently just $24, and it doesn't seem like a priority for the July banlist. Of note: Drytron Nova narrowly missed the Top 10, coming in at Number 11 for the week. It seems players are buying back into the strategy, as most probably predicted.

Crystron Halqifibrax also pretty good with the card that landed at Number 3 this week, but we'll get to that in a second. 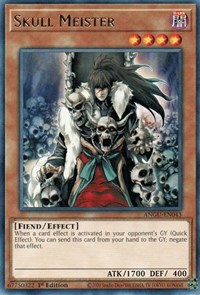 With the Ogdoadic hype seemingly over, Skull Meister was the Top 10's only reminder that Ancient Guardians exists. Everybody should have a playset, it's cheap as dirt, and you might as well grab fresh copies for a fraction of the price of all the banged-up Light Play copies from Code of the Duelist and Powercode Link. 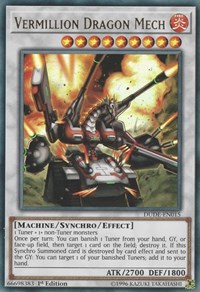 So there's a bit of a mystery in the Top 10 this week, and Vermillion Dragon Mech is one half of it. This card sees play nowhere but Virtual World, a deck that's barely topping tournaments these days. Does something else make it relevant once Lightning Overdrive releases? I asked a LOT of people, and nobody had an answer.

Was Vermillion Dragon Mech popularity spurred on by Paul Judal's Top 8 with Virtual World at the latest Extravaganza? That seems like a stretch. I feel like I'm just missing something. It doesn't seem like a buyout: thanks to Duel Devastator there are hundreds of copies listed on TCGplayer right now. Hate to say it, but I'm stumped.

Great card, still five bucks, and it'll probably be five bucks for a while. If you're coming back to cardboard Yu-Gi-Oh or you're just getting into competition for the first time, you're probably buying a couple copies right now. Big Turn 1 decks are still huge, and as long as Forbidden Droplet a hundred bucks this card's going to be big. 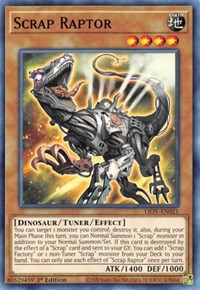 The incredible demand for Lightning Overdrive's Scrap Raptor may be the biggest news in the secondary market this week. The number of copies sold is greater than three times the number of unique buyers, which would usually indicate speculation, but since this is a common with very little room for growth I think we can say it's just a great card that people want a few copies of. Are people ordering for their friends? Did one dude buy hundreds of copies to throw the numbers off? Who knows.

What matters is that this card is amazing, and we're going to see it played in a few different ways. Scrap Raptor largely going to be used to search Scrap Recycler, and since it's a Dinosaur and a Tuner, you can get to it with stuff like Fossil Dig and Scrapyard. Do that and you can basically run twelve, maybe fifteen copies of Scrap Recycler to start your combos. What people will do with that is up in the air, but wherever this card ends up, the journey probably starts with Orcusts.

Players are trying to break this card in Orcust decks right now as you're read this, and from there it could see play in obvious places like Dinosaurs and Scraps, as well as a range of FTKs involving cards such as Number 33: Chronomaly Machu Mech. It could also show up in anything that wants to run Crystron Halqifibrax.

Lightning Overdrive has a lot of amazing cards at low rarities and Scrap Raptor one of the best (Tri-Brigade Bearbrumm the Rampant Rampager is also confusing as just a Super Rare). Brace yourselves: claims that Lightning Overdrive is bad because "there are no money pulls except Diviner of the Herald" are coming.

How long can PSY-Framegear Gamma stay at $4 to $5 bucks? Probably four weeks, tops. Again, this is one of those cards that had a huge budget reprint late last year, so another reprint in the near future is unlikely. Also, PSY-Framegear Gamma (CR) just keeps going up. So that's neat. 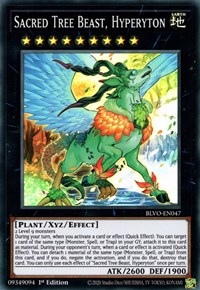 And finally, Sacred Tree Beast, Hyperyton clocked in at Number 13 last week when there was some speculation that it could be useful in Ogdoadics. Flash forward to now, and testing proved it to be a disappointing option, while Snakes seem to be off the competitive radar anyways. So what pushed Sacred Tree Beast, Hyperyton to the Number 1 spot? Just like Vermillion Dragon Mech, this card's only seen successful play in Virtual World. And even there, it's taken a big back seat to Ultimaya Tzolkin and Crystal Wing Synchro Dragon.

The buyers picking up copies this week were often snagging more than one, similar to the semi-speculative buys we saw when Blazing Vortex first released. But the copy-to-buyer ratio isn't massively skewed, so it's tough to make a call on this one. This might be hype for Rikka Queen Strenna? It was the Number 15 best-selling card this week, it's been talked up by some YugiTubers, and there's been some discussion of it on Reddit. It's unproven, but there's clearly an audience. 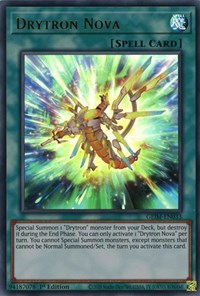 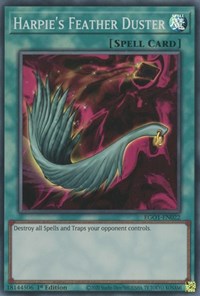 Also big this week, though not quite making the Top 10: Drytron Nova came in at Number 11 as I mentioned, as players look ahead to Lightning Overdrive. Drytron Nova currently around $30, up from an all-time low of $25 at the middle of May, so it's gaining some steam. Meanwhile Invoked Augoeides came in at Number 12, Harpie's Feather Duster finished at Number 13, and PSY-Frame Driver rounded things out at Number 14.

That's it for this week, but stick with us through the weekend for a look at the most expensive cards in Goat Format, plus some Side Deck philosophy from Hanko. As always, thanks for reading!