Dungeons & Dragons: Adventures in the Forgotten Realms became available in paper form on July 23rd. Tiamat and Old Gnawbone had the highest average market prices heading into release day among all the cards in the set. Both cards saw prices hovering around $20 for regular versions, with Tiamat edging out Old Gnawbone by less than $1. Throughout the Forgotten Realms release weekend, average market prices fluctuated for many in-demand cards. Most Standard cards typically fall in price coming out of presale. However, a few Forgotten Realms cards maintained or even increased in price between Friday, July 23rd, and Sunday, July 25th. Let's look at the 10 most valuable regular versions of cards in Forgotten Realms following its paper release. A key benefit of Treasure Vault is its artifact land typing. Cards that care about artifacts can take advantage of Treasure Vault's typing and zero mana cost (since it's a land). There are less than 20 non-basic artifact lands in Magic: The Gathering, including 10 from Modern Horizons 2. Artifact lands from Mirrodin got banned in Modern due to their strong synergy with Affinity decks. Xanathar, Guild Kingpin is an interesting commander choice for about $9. Xanathar's ability allows you to play cards off the top of an opponent's library during your turn, including lands and spells. In addition, Xanathar locks the chosen opponent out of casting spells for your entire turn. Pairing Xanathar, Guild Kingpin with Paradox Haze enables you to target two opponents each turn. Copying Xanathar with Sakashima of a Thousand Faces also allows you the opportunity to target multiple opponents. While you may not be able to play more than one land each turn, you do get to cast spells off the top of each opponent's library. #6: The Book of Exalted Deeds Lolth, Spider Queen has an average market price of slightly over $10. Note that Lolth does not have a +1 loyalty ability. Instead, Lolth's passive ability adds a loyalty counter each time a creature you control dies. Using the -3 ability adds two 2/1 black Spider create tokens with menace and reach that can block, attack, and add loyalty counters to Lolth.

If Lolth, Spider Queen is running low on loyalty counters, the +0 ability is an acceptable option to draw cards. Lolth synergizes well with sacrifice decks, especially those including Plumb the Forbidden. Currently, Lolth is an inclusion in the Standard Abzan Blink deck.

#4: Inferno of the Star Mounts Demilich is the 3rd most valuable Forgotten Realms card, with an average market price of around $15. During spoiler season, Demilich received considerable attention due to its unique and powerful abilities. While the mana cost of Demilich appears to be an obstacle, casting four instant or sorcery spells in one turn reduces the casting cost to zero. Players are including Demilich in Izzet decks across MTG formats. At the moment, Modern Izzet Phoenix is probably the best shell for Demilich. The deck synergizes with Demilich by pitching cards to the graveyard and casting multiple spells in one turn. Faithless Salvaging is a relatively new inclusion for Izzet Phoenix that complements Demilich by filling the graveyard and drawing cards, and it can be cast for free with rebound. 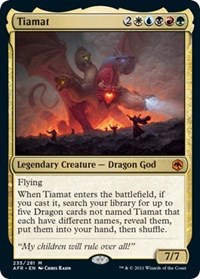 The Legendary Dragon God Tiamat has an average market price of $20. Fans of Dungeons & Dragons are excited to see Tiamat as one of the mythic rares in Forgotten Realms. Tiamat's five-color casting cost reflects the colors of its five heads. In addition to being a 7/7 Dragon God with flying, Tiamat allows you to search your library for up to five Dragons not named Tiamat with different names and put them into your hand, as long as you cast it.

With an average market price over $22, Old Gnawbone surpassed Tiamat as the most valuable card in Forgotten Realms. Old Gnawbone is an exciting Commander card with the ability to create Treasure tokens equal to the combat damage your creatures deal to opponents. A prominent home for Old Gnawbone is in Dragon Commander decks helmed by Tiamat or The Ur-Dragon. Old Gnawbone also synergizes with other notable Commander strategies including creature tokens, Gruul Aggro, and Treasure. Chatterfang, Squirrel General or Rhys the Redeemed could include Old Gnawbone to enable each creature token you own on the battlefield the chance to generate Treasure through combat. Gruul decks might want to pair Old Gnawbone with Xenagos, God of Revels or Proud Wildbonder. Lastly, Korvold, Fae-Cursed King could use Old Gnawbone's ability for Treasure shenanigans with Dockside Extortionist and Revel in Riches.