Today's Top 5 list is dedicated to everyone's favorite blasting tortoise (not to be confused with its somehow lesser evolution, a literal war turtle). Blastoise made their debut via Squrtle all the way back in Base Set, and has been featured on more than 20 different cards since then. Armed with dual water cannons and a giant protective shell, this Pokémon is ready to battle.

Here are 5 Blastoise cards that blow the rest out of the water! 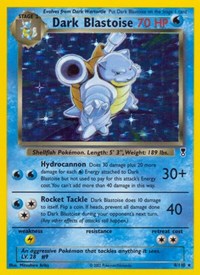 Despite its name, this 2002 set release was initially slow to gain traction among fans. This 'greatest hits' collection of Pokémon cards contains 110 cards, many of which celebrate the original cast of characters from Gen 1. Once it finally hit the collector's market, though, it hit hard, and card values — including this Holofoil Dark Blastoise — climbed the charts. 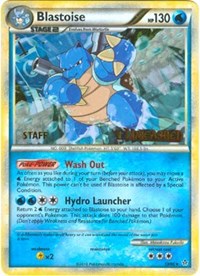 Promo cards are almost always high value due to their limited print run, and this card given to prerelease staff in 2010 is no exception. That little gold stamp of the word 'staff' (check the bottom left-hand corder of the card art) makes for a big increase in value! 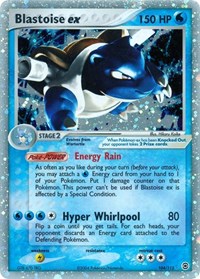 This Blastoise, released in 2004, is unique for its visually striking design aesthetic as well as its value as a Holo Rare. It features unique blue and silver elements to match the character art. 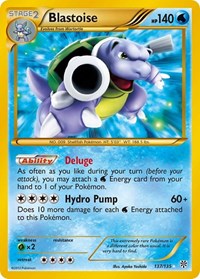 2013's Plasma Storm Blastoise is actually a reprint of the card from Boundaries Crossed — although this time, it's an Ultra-Rare Secret card. This status was formerly indicated by the distinctive gold border as seen above, before it was eventually abandoned in favor of a rainbow gradient effect.

This particular Blastoise happens to be a Holofoil, but even more importantly, it's a Shadowless card — that is, the character box art does not feature a drop shadow behind it. Base set cards are some of the most sought-after, due to their presence in the first ever English set to be released, all the way back in 1999.

That's our top 5! Which Blastoise would YOU blast your savings on?