10,000 volt lightning bolts aside — ouch — Pokémon lore warns that this 'mon is more than a little bit prickly in personality. Maybe that's why Jolteon isn't quite as popular as fellow Electric-type Pikachu. (Although who else is, really?)

Fortunately, we've got a soft spot for this sparkler.

Here are 5 Jolteons that are currently emptying wallets: 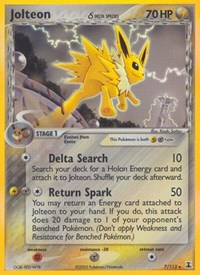 A Lightning-Metal hybrid, this card depicts Jolteon in full swing within an electrical storm. This Holo Rare was released in 2005 as part of the EX Delta Species expansion. The passage of time, combined with its shine, has allowed its value to climb ever since. 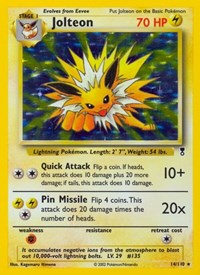 Incoming! This Holo Rare Jolteon is positively supercharged with power. Fans of the original Jungle set from 1999 will appreciate this reprint, which came out in 2002. 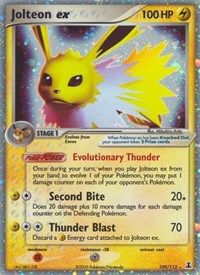 Three words: Ultra Rare Holofoil. When it comes to factors that influence value (age, rarity, and that unforgettable shine), this 2005 card has them all. Just beware of that Second Bite! 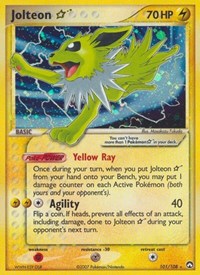 Another Ultra Rare Holofoil, although Jolteon Star is a little more dynamic and a lot more valuable. Released in 2007 as part of the EX Power Keepers expansion, it depicts the alternate color version of a typical Jolteon. 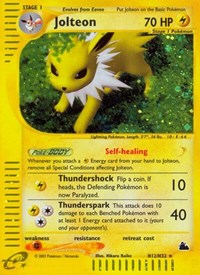 General consensus among Pokémon fans is that the Skyridge set was vastly underprinted, and released during a downswing to boot. That makes copies of this particular Jolteon highly prized. Take one look into those huge, dark eyes and fight the urge to say, "Shut up and take my money!"