Today we're taking a look at the many-finned final form of fan-favorite Eevee. (Try saying that five times fast.) That's right, it's Vaporeon! This 'mon has been making waves in Poke-finance ever since its arrival on the scene in Gen 1.

Which five top our 'Most Expensive' charts? Let's dive in! 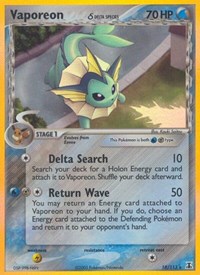 Here we have a Holo Rare card that's especially unique — it showcases Vaporeon as a dual-type, with both Water and Metal energies represented. (All thanks to a blast of electromagnetic radiation. Poke-lore is wild.) 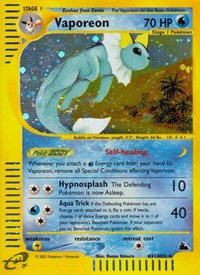 This card gets its value from a combination of factors. Its e-reader status grants it rarity, since e-cards were discontinued after Skyridge. The set was also underprinted due to its arrival during a downswing in Pokemon fandom — making this particular Vaporeon especially scarce! 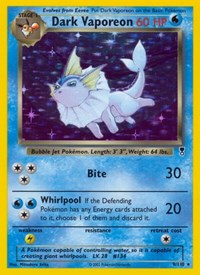 This so-called Dark Vaporeon is practically glowing against a dark, mysterious background. Originally part of 2000's Team Rocket expansion, it was reprinted as a Holofoil in the Legendary Collection set just two years later. Despite its name, the Legendary Collection was not an immediate hit with fans, only rising in popularity fairly recently — likely due to nostalgia for the early aughts. 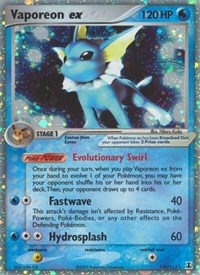 Delta Species makes another appearance on our list, although this Ultra Rare was printed later in the set. You can tell it's a relative newcomer because it dropped the addition of Metal to its type. 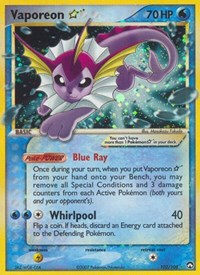 This Ultra Rare was released in 2007 with Power Keepers, the last third-generation set. Here we have dynamic artwork featuring a classic heroic pose. Vaporeon Star is truly the star of the show.