With Battle for Zendikar spoilers hitting the Magic Internet the tendency among most writers is to talk about what might happen in a couple of weeks, speculate on how some of the new cards might fit into existing archetypes, or grouse over the upcoming rotation of old favorites. Instead this time I'm going to go the other way: With only a little time left for Threros-Tarkir Standard, I'm going to ask you to give a particular archetype a look it probably always deserved.

"People are generally too interested in what archetype someone is playing and not interested enough in their specific card choices." -Zvi Mowshowitz

"Abzan Aggro" has been one of the most popular macro archetypes in Standard for the better part of the last year. Mike Sigrist started his run at Player of the Year with one of the first Abzan Aggro decks at Pro Tour Kahns of Tarkir, and decks featuring both Siege Rhino and Fleecemane Lion at the same time have been the most heavily played in multiple individual weeks.

The traits of these decks have been relatively steady...25 lands, no Courser of Kruphix, three or so copies of Dromoka's Command (once the card had been printed), generally two Wingmate Rocs.

The first week that Fate Reforged was legal for Standard, one player etched his name in lasers in Top 8s, week after week with great consistency: Andy Boswell.

And what is super interesting is that Andy's take on "Abzan Aggro" has been both so steady and so consistently different from what everyone else has been doing. Andy's decks have featured a stack of principles that almost no other Abzan Aggro player has been willing to touch...

● No Thoughtseize (at least no Thoughtseize main)● No cards that cost more than four mana -- meaning no Wingmate Roc, ever● 24 lands only...but always four copies of Mana Confluence● Heavy reliance on Valorous Stance from the first week it was legal...but few if any copies of Hero's Downfall, ever● Heavy inclusion of Bestow creatures...some weeks both Boon Satyr and Herald of Torment

Here is the deck Andy used to make Top 8 of the Standard Open in Washington back in January (the first week Fate Reforged was tournament legal), and the unofficial birth of his take on the archetype:

Here is the deck that he used to come in second - :( - at the WMCQ in Philadelphia a few weeks ago:

Andy never played Soldier of the Pantheon again after Washington, but at least he never wavered from his commitment to getting the jump on his opponents with four or so copies of Warden of the First Tree.

Some players look at the progression of Andy's decks and "just" see a weird take on Abzan Aggro; what I see -- and I think you should take a look at while you have a chance -- is a Grand Prix Top 8, the aforementioned WMCQ finals, an Open win, and a bazillion other Top 8s.

Here are the five reasons you should give Andy's take your last look:

1. The Mana Makes Sense2. The Curve Does, Too3. It Makes Use of Every Part of the Buffalo4. It Can Actually Kill Silumgar, the Drifting Death5. ...And Elspeth, Sun's Champion

Has it never bothered you that the "Aggro" version of Abzan has always played 25+ lands (currently 26 or even 27 for Hangarback Walker versions) when the "Control" version of the same color combination so often played only 24?

Put aside that "Abzan Aggro" has so consistently eschewed Courser of Kruphix (the second best card in the color combination) and only recently adopted Den Protector at the three.

Well, to start off, Andy's version has always played 24...but four of them have always been Mana Confluence. The simple version is that, with one-drops and redundant two-drops, Andy's deck has consistently been able to get the jump on the opponent. For a deck with so many challenging color requirements, Mana Confluence has been instrumental in making that possible. It is a card that can get the party started on turn one with Soldier of the Pantheon, follow up with Rakshasa Deathdealer on turn two, and help out with, well, anything on turn three.

While putting a dent on your life total is certainly a thing, the quality of the Abzan cards is so overwhelming that the mere ability to get them in play faster -- certainly faster than a deck with eight Temples -- gives you a huge advantage, and one that other versions of Abzan don't have.

The only reason 24 lands works in Andy's deck is that he doesn't play cards like Wingmate Roc -- and to a lesser degree Hero's Downfall -- that have been staples in other versions of Abzan. Andy's 3/4 white creature will have already been on the table -- and have made two to three additional tokens -- by the time Wingmate Roc can even hit. Because of his focus on two mana removal spells instead of [mostly] three mana removal spells, the Boz is in position to cast two removal spells on turn four. This means that if he has an advantage on the battlefield from turns one to three he can maintain it and keep the opponent from being able to match materiel on the board. On balance, opponents who are focused on removal like Hero's Downfall will largely be trading down, mana wise.

The curve success extends to the Boz's sideboard, where Hunt the Hunter has been ever-present, largely alongside Self-Inflicted Wound. Instead of choosing flexible cards that can do lots of things, he has consistently chosen tight cards that do a specific thing in specific situations...but do so while generating tempo.

In some ways, his deck plays like The Red Deck.

3. IT MAKES USE OF EVERY PART OF THE BUFFALO

When I watched Boz win the Baltimore Open live, I wasn't sure I would have been able to see the kill.

Keep in mind he was in a tough matchup (GR Devotion) and drew a bazillion lands. He was in fact -- at only nine life -- dead on the swing back due to the opposing Dragonlord Atarka.

How did he win the game?

Andy pumped his Rakshasa Deathdealer to high heaven, got it to fight the Dragonlord Atarka that was blocking his Siege Rhino, then used the trample on Siege Rhino to win despite being blocked by an 8/8 creature.

While this was super exciting at the time, it is actually the case that a large number of games with Andy's deck come down to some weird set of factors that don't come up for other decks, or at least other versions of Abzan. Part of that is just because it plays a bunch of cards that no one else does.

Consider this game that I played with Andy's deck last week: 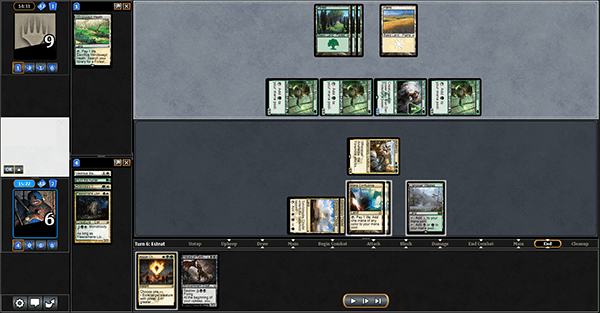 Do you see the path here?

Better: How much do you think my opponent wanted to shoot himself at the end of this game?

Why are all his Elves tapped? I passed at 12. He needed to put me on a two-turn clock. He passed with me on six and him on nine.

This endgame is somewhat similar to the one the Boz used to beat Chris Andersen. That is, you have to do a bunch of wacky stuff to win. Like blasting yourself with double Mana Confluence and a Llanowar Wastes to get two +1/+1 counters on Anafenza.

Then Mana Confluence needs to deal two of the last three to Bestow Herald of Torment and attack for exactly nine damage.

When you figure it out though?

Every part of the buffalo.

4. IT CAN ACTUALLY KILL Silumgar, the Drifting Death

A couple of weeks ago I wrote an article about how invincible Silumgar, the Drifting Death is in Standard right now.

For the most part that's true.

I talked to Andy about it at the New Jersey Invitational and his response was to smile and talk about how tasty Silumgar is for Siege Rhino.

While the Boz played main deck Herald of Torment the week he won the Open, double Boon Satyr has been almost ever-present in his maindeck. To his credit, when you're the Silumgar deck you are typically fine tapping out for Silumgar. The plan, of course, being that you'll block an oncoming attacker with it.

And if the Boz has Boon Satyr?

You're going to be in a lot of trouble.

It's one thing to be able to Remove Silumgar, the Drifting Death from play -- which is unusual in itself -- but to actually end up ahead in the exchange?

"I'll be honest. You're a deck of two and three mana spells. If someone pulls off a six mana spell, you're going to be in trouble. That said, you've got answers."

Not only does Andy's deck have some ways to interact with Elspeth, Sun's Champion, they are non-intuitive and just as slick as how it can get around Silumgar, the Drifting Death. Note that if you use Boon Satyr in combat to get through and smack Elspeth you have built-in insurance against a future Elspeth minus.

Herald of Torment is of course the sweetest victory; flying over 1/1 token creatures and generally putting one of the deck's medium or large creatures in position to Remove her in one blow.

All these unusual cards -- the Mana Confluences early, the Hunt the Hunters early, the large number of rarely played curve threats like Soldier of the Pantheon or even the out-of-position Brimaz, all the way to the Bestow threats [in lieu of Wingmate Roc] -- put Andy's deck in a unique position in Standard. It can crowd the opponent, put him on the defensive from the outset, have him reacting like he's up against Monastery Swiftspear and Eidolon of the Great Revel...only the threats are so, so much more powerful in play.

While the theme was to give this deck a look before everything rotates, I will end with a tip of the hat to Battle for Zendikar. As it didn't play Thoughtseize to begin with, the Boz's version of Abzan is probably a decent starting point for transfer decks. But it loses Mana Confluence!

Can we correct with new Battle for Zendikar options?

Here is a little something I learned from Patrick Chapin on this week's Top Level Podcast:

Flooded Strand! It might just be an aggressive Abzan mage's best friend in a few weeks. Not only can it find Canopy Vista (which is a Plains) it can find Sunken Hollow (which is an Island).

Now why would Abzan want to find an Island?

It turns out that midgame -- as long as you have two or more basic lands in play -- Sunken Hollow is just a Swamp you can fetch with a Flooded Strand! How crazy is that? You don't even need to tap for U. It's just that having a UB dual land in your deck is actually better than having a land more succinctly "in your colors" due to the nature of our upcoming mana options.

Chew on that one for a while. Flooded Strand in Abzan, indeed...