What attributes determine the best cards in a format? Top players will usually agree what they are, but the criteria they choose to determine them can be inconsistent. In some formats you will see the pure aggression of Disciple of the Vault cited; in others the inevitability of a resolved Arc-Slogger; in most (where he is available) the steady, grinding, flexibility of Jace, the Mind Sculptor. But in some formats Jace has been rated beneath the lowly (yet frustrating and self-liquidating) Spreading Seas.

I like to point to two things beyond a card's rate:

1. A tangible "difference that makes the difference." In a universe where most good cards (on rate) are already known on their fundamentals, the only way we can get an edge is by doing something that is both different and "also good" relative to known high Tier card choices. These cards tend to be less overtly spectacular but can cost-effectively Undermine the fundamentals or card advantage mechanisms of a format. They include both answers and threats, from Vicious Hunger to Pilgrim's Eye or Gurmag Angler.

2. Cards that are mispriced relative to the rest of the format. Everyone else is operating under certain assumptions on how much things cost and how valuable they are relative to how much they cost and how frequently they are played - your classic "Tier One" cards. Most players assume cards that are outside high tiers are just bad, so they don't price them appropriately. Assuming Tier Two cards are Tier Unplayable can bite you in the butt when you're wrong, because cards that are a little bit less good proactively can often line up against Tier Ones effectively (whereas you might not have answers for them). Sphinx's Tutelage with Tormenting Voice setting up Treasure Cruise is a great string of cards that are all less good than accepted options but snowball very effectively in the right context.

Today we're going to talk about a non-Tier One card that falls into both of these categories, and based on the context and texture of the rest of the format, might actually be a legitimate Top 10 card in Standard right now:

Silumgar, the Drifting Death has the distinction of being basically the only Dragonlord-to-be to see any play prior to Dragons of Tarkir. You can make a case for Kolaghan, the Storm's Fury being a played card, but baby Kolaghan has seen most of its value realized only after the printing of daddy Kolaghan. As dominant as Dragonlord Ojutai and Dragonlord Atarka have been in various decks, Ojutai, Soul of Winter and Atarka, World Render have seen almost no action in serious decks.

Don't even get me started on Dromoka, the Eternal! Which is actually a shockingly efficient card on the fundamentals; I guess we just live in a Standard where expensive cards have to do something beyond their baseline rates to see play.

But Silumgar? Silumgar has been full-on "okay" for months. I played it as the last-last one-of Dragon in my Utah RPTQ deck's sideboard:

...but you might remember that it was a little Silumgar shenanigans that got me through the last game of my PPTQ to begin with:

Unlike the other Fate Reforged Dragonlord pairs, Silumgar is actually the only one where there is any uncertainty about which is the better card. Dragonlord Dromoka just put up another Grand Prix Top 8 in the hands of Hall of Famer Paul Rietzl; Dragonlord Ojutai and Dragonlord Atarka have had two different Strangleholds on Standard since Dragons of Tarkir; whereas Kolaghan, the Storm's Fury is the oddball that outperforms its Draglonlord papa.

● Pro Tour Dragons of Tarkir finalist Shouta Yasooka played two of one, one of the other in his Top 8 UB deck, but Andrew Ohlschwager played two and two.

● For at least a short spell, the dominant Esper Dragons archetype played Silumgar, the Drifting Death over Dragonlord Silumgar because of the hexproof theme with Dragonlord Ojutai

Today, contextually, Silumgar, the Drifting Death is simply a slam dunk. Here are the Top 8 reasons why:

8. Implied Win Percentage
7. The Absence of Answers
6. The Absence of Interaction
5. The King of Small Ball
4. The Opposite Command
3. The Best Thing Ever
2. "Scissors" and Synergy
1. The Clear and Present It Girl

I'd ask you to look at two different numbers from two different tournaments. One of them is probably way more surprising than the other.

Dolar went 8-1-1 at Pro Tour Magic Origins...an absurd performance in a tournament that was supposedly all about aggro strategies (tons of RDW in the Top 8, RDW over UR Ensoul Artifact in the finals, breakout of Kibler's GW deck and Cuneo's Sphinx's Tutelage deck, etc., etc.).

But in that room, in a format where the printing of cards like Infinite Obliteration could have taken the wind out of Dragonlord Ojutai's sails...Dolar put up one of the best W-L records in the tournament.

What might be even more surprising is that I am citing a deck that didn't actually play Silumgar, the Drifting Death. 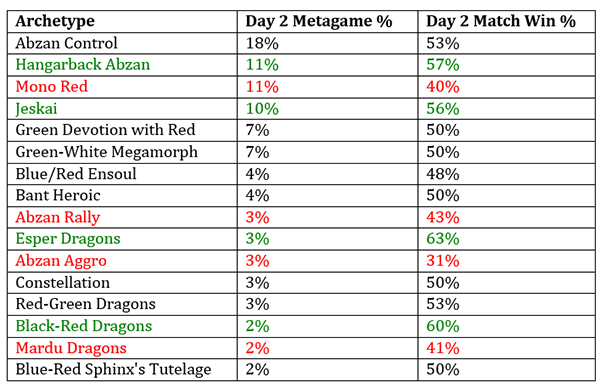 Those are the Day Two numbers from Frank Karsten's analysis of Grand Prix London last week.

Again we see a whiz-bang W-L from Esper Dragons.

The Top 8 was all about Abzan Aggro -- Abzan Aggro v. Abzan Aggro in the finals, remember -- but it was Esper Dragons that actually held the best Swiss percentages on Day Two.

Who even knows what these decklists were?

This 8th point is about implied win percentage. The point is, decks that play slow Dragon-based strategies are not just capable of performing in the Magic Origins-powered new world, they already are!

7. The Absence of Answers

None of these cards can destroy Silumgar, the Drifting Death. It isn't like Dragonlord Ojutai, where once it attacks it becomes vulnerable to Valorous Stance, or dies to a Languish anyway. There is something like one End Hostilities in one sideboard that can kill Silumgar, the Drifting Death once it already on the table. That doesn't mean that answers don't exist...just that people aren't playing them.

To be fair, Ugin, the Spirit Dragon as a relatively minor player exists, but it is not present in the most popular decks; nor the most talked about.

6. The Absence of Interaction

Forget about being able to deal with Silumgar, the Drifting Death once it is already on the table. One of the things that has historically held back expensive-but-powerful threats is the presence of efficient ways to interact before it is too late. I am talking of course about efficient permission spells like Disdainful Stroke or Dissolve; or just a flexible discard spell like Thoughtseize.

Look at the GP London finalists...

So the Abzan Aggro decks actually have access to the Thoughtseizes that can pre-empt the big bad dragon...just not in game one.

The implication here isn't that Silumgar, the Drifting Death is unbeatable in-matchup, but that you get free win percentage. And as a forward thinking Magician planning for his best possible outcomes, what more could you ask for?

5. The King of Small Ball

The Standard King of Small Ball is now and has been Siege Rhino since the printing of Khans of Tarkir. Siege Rhino is arguably the best card in Standard overall, and probably has been since its first appearance + utterly predictable inaugural Pro Tour win in the hands of Team TCGplayer's Ari Lax.

Imagine you just sit back and line your Silumgar, the Drifting Death up against his Siege Rhino. Great. They bounce (again, unless Siege Rhino has some help). Siege Rhino isn't killing anything or anyone. Silumgar's controller gets to bide his time, draw cards, figure something to do other than die to a Siege Rhino.

Now what happens? The Siege Rhino player has to play his next thing just so he can get into a position where he can possible get in and get through.

Now the Silumgar player has a chance to get a two-for-one or really dramatic turn. Crux of Fate is tailor made for spots like this...and so is Languish.

The great Abzan Aggro player Andy Boswell points out that a Siege Rhino doesn't live through Languish's -4/-4 and Silumgar, the Drifting Death's -1/-1 together, no sir.

Dromoka's Command is probably the most heavily touted game-swinger in all of Standard. It is a two-for-one whenever it isn't a sick three-for-one. It has single-handedly extincted maindeck Outpost Siege and wiped Mono-Blue Devotion out of the metagame mere seconds after that once-proud archetype discovered Collected Company. It is the murderer of Courser of Kruphix and the Scotty Pippin to Hangarback Walker's or Hardened Scales's Michael Jordan. It can be the best card you can draw against either of the Pro Tour finalist decks, and is a popular three-of or four-of in archetypes as far ranging as GW Memamorph, Abzan Aggro, Abzan Control, or Naya Midrange. As a card it has single-handedly transformed UW Heroic to Bant Heroic (where it is not surprisingly the best card as well as best heroic enabler).

Dromoka's Command is the first card any of these players reach for in between games against Silumgar, the Drifting Death, against which it has almost no text.

3. The Best Thing Ever

The current Rules of Engagement in Standard hold Elspeth, Sun's Champion as the great divide.

Basically there are decks that play Elspeth and decks that get beat up by Elspeth. Elspeth is mayhap the only thing holding GW Megamorph from rocketing to or past Abzan's position in the metagame. She is a tool of Abzan, UW, RW, and others; the foundation of midrange control and the top end of aggro, sideboarded.

She is absolutely, utterly, pathetic against Silumgar, the Drifting Death. It's not just that she isn't good...Elspeth is like six mana, no text. Silumgar can attack or not attack Elspeth; it doesn't really matter because Elspeth can't get ahead. Big Butt Silumgar is quite resilient on the back end, but too small in front for Elspeth to kill; her 1/1 Soldier Tokens die regardless of who Silumgar attacks.

...and this is a card (quite a wonderful card, we all agree) that currently divides Standard in two!

One of the most fearsome threats in Standard right now is Ensoul Artifact. It is a potentially very fast 5/5 threat, and potentially quite resilient. Dragon-based control decks actually have reasonable solutions to cards like Ensoul Artifact; it doesn't matter how big a creature is relative to a Hero's Downfall, and Foul-Tongue Invocation can deal with even an "indestructible" combination of Ensoul Artifact and Darksteel Citadel.

But you know what else does?

Same thing that we said about the King of Small Ball: Languish + Silumgar, the Drifting Death's -1/-1 ability Voltron together for yet another way to Remove even an indestructible 5/5.

1. The Clear and Present It Girl

The present It Girl of Standard is Hangarback Walker. Hangarback Walker has been compared to everything from Lingering Souls to a delayed blast Tarmogoyf. It's selling point is how quickly it can come down, and how much damage it can absorb from a fast aggro deck. But once Hangarback Walker explodes into a parade of 1/1 Thopter Tokens, it can combine with Sorin, Solemn Visitor, Jeskai Charm, or Thopter Spy Network for a variety of impressive offenses.

...but not against Silumgar, the Drifting Death.

Silumgar, the Drifting Death lets you deal with literally the most meteoric cross-deck All-Star in the format -- a card that has contributed separately to UW Control, GW decks of multiple stripes, the Evolutionary Leap combination, and now Abzan -- without a loss of card advantage.

I know what I am playing this weekend: Silumgar, the Drifting Death