4:23 PM: My boss hands me two tickets to tonight's Syracuse/Loyola basketball game. He takes special care to inform me that the seats are right outside the best beer stand the Carrier Dome has to offer. He has a feeling this might pique my interest. He asks me who I'm going to bring with him, and I tell him I'll be bringing my co-worker and future roommate, Dan.

6:02 PM: I'm off work, waiting in the office for Dan to show up so we can beat the standard SU Game Traffic (ha ha). Willis and Joe are playing the latest installment of Madden out in the common area, and I wonder aloud, with some incredulity, who on earth would pick the New York Giants. Joe sheepishly raises his hand, and on the very next play, Eli Manning chucks a long ball right to Willis' 49ers. It dawns on me just how lifelike these Madden games have gotten in recent years.

6:46 PM: After cleaning out my car, Dan and I are en route to the parking lot our boss gave us a pass for. We have split time evenly between arguing how to best decipher the map of the campus and going around in circles. I take a break in the cycle to ask Dan what time it is, and he replies, "6:46." 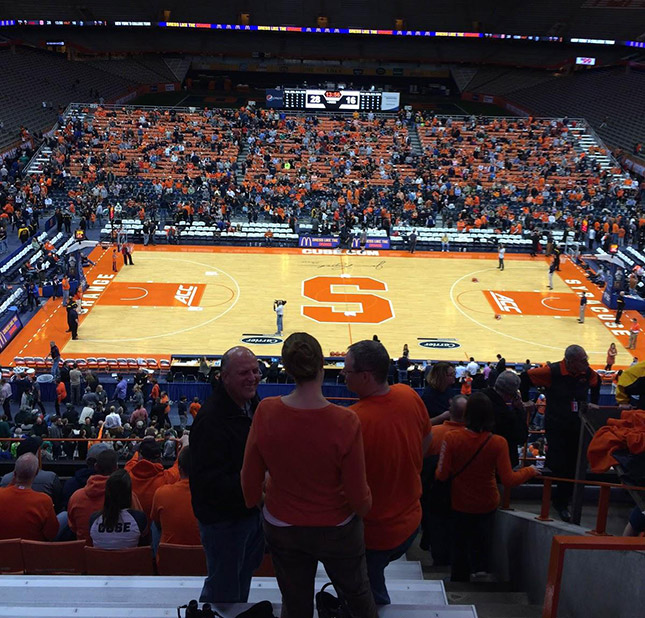 7:07 PM: Kaleb Joseph makes a steal and dunks it home for Syracuse's first field goal. This is only important because it means that everyone can finally sit down - the home crowd always stands until SU makes a field goal.

7:12 PM: The score is 14-0. Syracuse is joylessly efficient on defense and just good enough on offense to score every other possession or so. My mind invariably wanders to Magic; I wonder if there's too much variance to make a thrashing like the one I'm witnessing possible in Magic.

I start to think about GP Philly from 2012. It's round five. Sitting to my left is Jon Finkel. He and his opponent are in game two, and Jon's discarding to hand size, getting attacked by some dorks. I turn my attention back to my match long enough to make some terrible plays, including attacking my Vitu-Ghazi Guildmage into my opponents Centaur's Herald; I figure he's tapped out, so it's two free damage, and of course, the lone counter on my opponent's Mana Bloom comes off and he shows me the Giant Growth to completely wreck me.

My eyes wander back to Jon's board, and he's not only dug himself out of the hole, but has taken the game down. While de-sideboarding, Jon's opponent, a younger kid, asks if there were any plays that looked suspect, if there was anything he maybe could've done differently. Jon thinks on this, but eventually shakes his head and offers a shrug. For every game swung by one massive misplay, there are also games decided by one fundamentally sound player taking advantage of their opponents' micro-errors.

Rakeem Christmas records his second block of the night.

7:25 PM: TCGplayer's inaugural Pauper Championships have come to a close, with our resident Team Sped founder Dennis taking down the whole shebang with a pauper spin on the old Sped Red deck that helped establish Team Sped's presence as bright up-and-comers who knew what they were doing, as opposed to just a handful of lingo-spawning stalwarts. Here's his deck:

Pauper is funny. Dan and I never really came close to the Top 2 cut - he played Hexproof, I played Elves - but we both played decks that were capable of broken enough stuff to compete. This is not how everyone approached it.

When you think "format with all commons," the general assumption is "wow, isn't that quaint? What a cute little format this is!" This is a dangerous conclusion to make, because Magic is a massive game. Even with only commons, there's enough room to do some disgusting things.

Check out the runner-up deck that our resident cat-lover Val piloted:

I haven't really paid much attention to pauper since V4 debuted; and when I did play, I played exclusively on Magic Online. I played UR Storm until it got banned, then played Monoblue Delver for a spell until moving to Affinity. I played all three decks only in Daily Events, not because I loved Pauper, but in an effort to support my nasty "lose in the first round of every 8-4 draft" habit that still persists to this day. I never enjoyed playing Pauper. The decks are super-linear and busted, and that's just not the type of Magic I enjoy. My preferences always tend to lean more toward Limited and Standard, and Pauper very closely resembles its other Eternal counterparts. Before the pauper league even started, Alex took his UR Kiln Fiend Pauper deck for a spin against my Legacy Shardless Sultai deck, just for fun, and ended up winning three games straight.

These are my problems with Pauper. However, there are plenty of bright spots the format has to offer. The cost of entry, in paper, is low. I was able to buy Elves, one of the more expensive decks in the format, thanks to Priest of Titania, for close to $20. Decks are easy to look up online if you want to get an idea of how the format works. I can't think of a better entering point into not just Eternal formats, but into discovering how big Magic is and how different cards from different eras interact with each other.

Val's deck - I don't know if it's a brew or not - seems straight-up ridiculous. Treasure Cruise has not failed to make its mark on this Eternal format as well, serving as quite the draw engine. I still contend that Val's four Delver of Secrets should've been four Spire Golems instead (he STRONGLY disagrees), but it's hard to argue with his results. I'm certainly taking a hard look at bringing something like this to the table in our next Pauper league.

7:29 PM: The nearby beer stand does not fail to deliver. I order a pair of Dogfish Head 60-Minute IPAs to go with my sausage sub.

7:36 PM: Halftime. Dan and I take a selfie to commemorate the occasion. 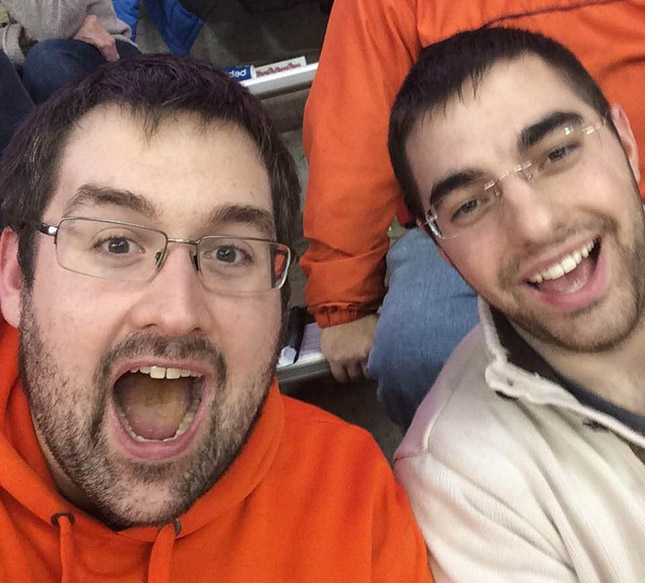 My tongue is orange on account of the Vitamin C water I drank at work. Everyone's getting sick this time of year, but I gotta stay on my grind. So I drink Vitamin C powder in water. It's disgusting.