Players finally got to play with Amonkhet cards at last weekend's prereleases, and subsequently went out and bought some cards. Today's Top 10 is 100% Amonkhet — let's dive right in.

I played in one prerelease flight, and had the misfortune to get paired against Glorybringer. Glorybringer doesn't care what format it is — it will kill you dead very quickly if you're not prepared for it.

As a recovering Phyrexian Negator / Phyrexian Scuta addict, I admit that in a different time and place, Plague Belcher is a card I would've been all over. I'm withholding judgment, because I'm biased towards cards like this, but the fact that it's selling well is promising. I mean... look, it's probably only selling well because it's a zombie and it's cheap, but just let me have this dream. I'd like to see this card in Constructed feature matches.

Fetid Pools was the only land of its cycle to crack the Super Sellers; Irrigated Farmland and Sheltered Thicket were both in the Top 25, but on the outside of the Top 10 looking in. The fact that the blue/black member of the cycle selling the best makes sense when you consider that the blue and black cards care the most about cycling, like Drake Haven and Archfiend of Ifnir.

After singing this card's praises for the last two weeks, I'm very excited for it to do nothing in Standard and for me to get made fun of by TCGplayer's lovely, lovely commentariat.

I was not aware this card existed until I saw someone cast it at the prerelease. It seems quite good — good enough for most aggressive red Constructed decks.

#4: Lord of the Accursed

If you're reading this column twice a week looking for broadly applicable takeaways, here's a free one: Tribes have a built-in audience. This is common knowledge for anyone that's ever worked in an LGS that sells Magic cards, but if you aren't part of that group, then just know that the reason your shop is always buying Lord of the Undead and Goblin King is that they sell reliably... for some reason. It's not clear to me why people like tribes so much. Maybe someone can address this in the comments.

Lord of the Accursed is a fine card on its face. Giving all zombies evasion is a good way to close out games that would otherwise stall out in a cluttered boardstate.

I'm no Commander scientist, but I'd wager that more than half of the players that play Doubling Season in their Commander decks do so for the tokens clause. Anointed Procession is that half of Doubling Season for one less mana and way, way less money. 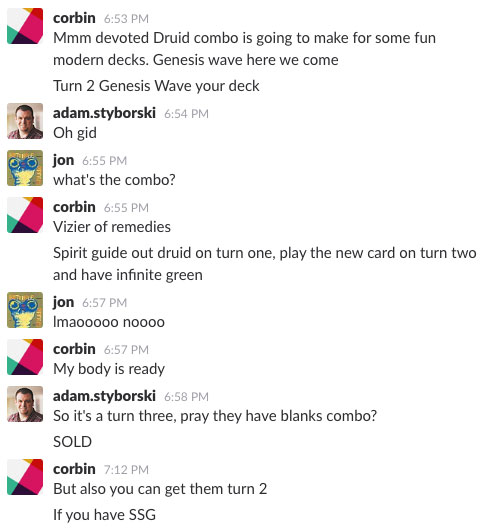 I shared that image from our work Slack when Devoted Druid cracked the Top 10, and I'm doing it again.

It is entirely possible, though, that Vizier of Remedies is good in Standard. We'll have to see.

Cycling gives Sweltering Suns a marked advantage over its contemporaries — it can be played virtually risk-free in the maindeck, free to be cycled away in matches or against boards where its effect is irrelevant. I enjoyed Amonkhet Limited last weekend, and if cycling cards like Sweltering Suns are any indicator, Amonkhet Standard should be pretty sweet.