With the new Battle of Legends: Armageddon releasing tomorrow, I finally get to dust off my Flower Cardians. They get two brand-new cards, and in my opinion, both of them are very good!

If you're reading this you probably don't know what Flower Cardians do. The short story version is that it's a Synchro-based deck that wants to Special Summon. A lot. But Flower Cardians also revolve around drawing cards, and most of the draw effects are basically a gamble where you try to draw a Cardian monster. If you draw a Cardian, great.  If you don't draw a Cardian, then you get a penalty that costs you whatever you drew as well as other downsides.

The good news is that you get to make lots of Special Summons and you can try for those draw effects again and again, since almost none of the cards are a hard once-per-turn. 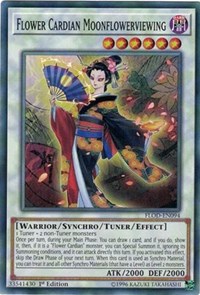 That means a card like Number S39: Utopia the Lightning or Borrelsword Dragon won't be able to use its effects to beat over your Cardians. Lastly, if your opponent somehow does get rid of your Flower Cardian Lightflare, it has another ability that lets you replace it by summoning another Cardian from your Extra Deck with a lower Level. So the next step of the ladder one rung below Lightflare is Flower Cardian Lightshower.

Flower Cardian Lightshower takes four monsters to summon and has 3000 Attack Points. While it's on board, all your Cardian monsters – including Flower Cardian Lightshower itself – are immune to targeting by your opponent's card effects, and also indestructible by any card effects. It also can burn for 1500 Liife Point when your opponent draws a card in their Draw Phase, at the cost of losing you your own Draw Phase. These two monsters are the deck's heavy hitters.  The other two Synchros are important too, but have a different role to play. 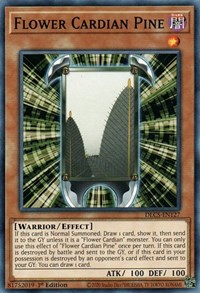 The Suits In The Deck

Flower Cardian Pine is your Normal Summon, and until Battles of Legend: Armageddon it was the deck's only Normal Summon – BLAR introduces a new card we'll get to later. When you Normal Summon Flower Cardian Pine you gamble, drawing a card and seeing if it's a Cardian monster. If it is, you keep it. If it isn't, you lose it immediately. The other effect triggers if Pine's destroyed by battle or card effect, in which case you draw another card (no gamble required).

Flower Cardian Zebra Grass, Flower Cardian Willow and Flower Cardian Paulownia all are high-Level monsters with a similar effect: you can Special Summon each of them from your hand as long as you control a Cardian with a lower Level. After you summon one of them, you lock yourself into summoning only Flower Cardians for the rest of the turn.

You can Special Summon Flower Cardian Zebra Grass while you control a Level 7 or lower monster. On summon, it has a Magical Mallet type effect that lets you mulligan away Cardian monsters from your hand to draw the same number of cards. I usually use it to try and draw into the spell cards or better monsters.

Lastly, Flower Cardian Paulownia is just a free Special Summon as long as you control a Level 11 or lower monster (that's everything but Flower Cardian Paulownia). Its on-board effect is really bad: it basically reads, "if your opponent somehow didn't read this card before they chose to attack it, end the Battle Phase and draw a card. 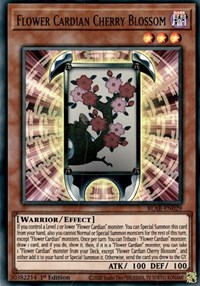 Battles of Legend released another non-tuner monster, Flower Cardian Cherry Blossom. It has two amazing effects, both of which fix some of the problems the deck suffered before.

Flower Cardian Cherry Blossom other ability is its gamble effect: you can tribute any Cardian monster to draw a card. If you draw a Cardian off the top then you get to not only keep the card, but also search or Special Summon another Flower Cardian from your deck! If you don't draw a Cardian with that effect, you lose the card that you drew.

That effect singlehandedly fixed another issue that was holding the deck back, where it lacked the ability to search tuners. While Flower Stacking was technically a kind of search card, it really needed more consistency. Anyways, while searching for the tuner is Flower Cardian Cherry Blossom priority, it's also a blessing to search out Flower Cardian Willow. 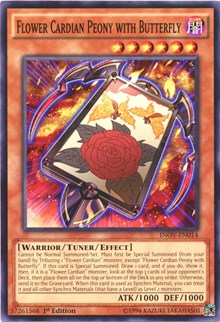 Flower Cardian Peony with Butterfly and Flower Cardian Willow with Calligrapher are the only tuners in the Flower Cardian theme. Both have effects that make all the monsters you use as Synchro Materials Level 2.

On the other hand, you can properly Special Summon Flower Cardian Peony with Butterfly by tributing any other Cardian on the field. When you summon it, it draws you a card and if it's a Cardian, you keep it and you get to stack the top three cards on your opponent's deck just like SPYRAL GEAR - Drone. Which is really good! Otherwise, just like the other gambling effects you lose the card you drew.

So we've explored the boss monsters, the Main Deck tuners and the non-tuner monsters. Let's continue with a look at the most important spell cards! These are the cards you want to open with, but which you also want to avoid seeing with your gambling effects. 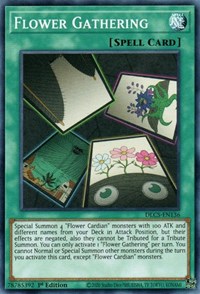 Super Koi Koi's similar to Flower Gathering, but it's a bit of a risk: you excavate the top three cards of your deck and summon any Cardians, "Ignoring summoning conditions." (It's very important that I mention that.) Their effects are negated and they become Level 2s. If you see any other cards in those top three, you banish them face-down and lose 1000 Life Points for each.

Recardination's another three-of, and it's one of my favorite spells. When you activate it you get back a Flower Cardian from your graveyard and you Special Summon any Flower Cardian from your hand, once again ignoring summoning conditions. Think of it as Monster Reborn or Monster Reincarnation. Its other effect trigger if it's sent to the graveyard by a Cardian monster effect: you get to excavate the top five cards of your deck, take ANY spell card among them and then rearrange the remaining four cards on top of your deck. That can net you a really strong spell card, and it can set up more combos by stacking cards where you need them.

I've mentioned De-Synchro a few times now, and though it's not strictly a Cardian-stamped card, it's very clear that it's meant to be part of the Cardian strategy, especially with the release of Super All In! from Battle of Legends: Armageddon. The main goal with De-synchro is to set up a Sychro Monster that was summoned with Flower Cardian Moonflowerviewing, the Willows or any other Cardian with an effect to draw that were all properly summoned. When you resolve it, you get a lot more cards back to your hand to help you make more plays. 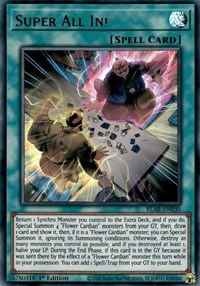 Super All In! also fulfills that high value aspect for the deck. Let me explain.

Similar to the design of Recardination, Super All In! has two effects. When you play it from your hand, you send a Synchro you control back to your Extra Deck, to Special Summon exactly four Flower Cardians from your graveyard. Then you draw a card. Sounds great so far right? Here's the catch: when you draw the card you have to reveal it. If it's a Flower Cardian monster you can Special Summon it ignoring the conditions, but otherwise you destroy all your monsters and lose half your Life Points!

Overall it's basically the same thing as De-Synchro, letting you abuse the draw power of Flower Cardian Willow and its allies. Which is great! With the loss of Soul Charge, the deck was very weak having to rely on three copies of De-Synchro to combo off. Now with a total of six "bomb" category cards, the deck has more ways to go off and go super plus!

Its other effect is similar to Recardination: if it's sent to the graveyard by a Cardian's effect, you get a spell back from your graveyard at the end of the turn. Again, it's just another factor helping you keep pressure on your opponent.

And That's The Game Plan

Summon monsters, find a tuner, make Synchros and if you have one of the "bombs" then you can go super plus! After that? Summon another Synchro with the profits. You can even make Flower Cardian Boardefly just for the sole purpose of locking out your opponent's graveyard, then De-Synchro it to do other things.

With all of that in mind, here's my current decklist.

With two amazing new cards from Battles of Legend: Armageddon, I decided that there was just no reason to cut this deck down. Since the build was already going above 45 cards no matter what, I thought that it would be even better if you can play Pot of Desires! One of the deck's big challenges, historically speaking, is difficulty getting to a starter card, so another draw card like Pot of Desires can definitely help. The only cards you hope to never banish is Flower Cardian Willow, since it's so important to loop them all together.

This deck is really fun to play, especially right now when no one plays Droll & Lock Bird. But Nibiru, the Primal Being exists, and for that one reason the deck's not quite good enough to be truly competitive. At the same time, none of my casual friends are willing to sit and watch me play for 20 minutes by myself, just to see me make a couple Sychro Monsters. Heck, if you miss a few gambles, the deck can just lose to itself and end on absolutely nothing. Flower Cardians still have a lot of problems to overcome. Flower Cardian Clover with Boar and Flower Cardian Maple with Deer can break some boards, sure, but that's only possible if you can touch the board to begin with.

The new cards from Battles of Legend definitely make the deck more reliable, since Flower Cardian Cherry Blossom lets you search as long as you win the gamble and you have other cards on board. BLAR also added more bombs to the strategy, so there are more high impact cards to see. Flower Cardians might not win a YCS anytime soon, but with the new support they're headed in the right direction.