When writers provide you with some profound wisdom about a card based on their experience at a Prerelease, you have to cast a somewhat skeptical eye. They are making statements based on a handful of games and/or statements from others at their Prerelease. The sample size is far too small to be of value, but it is a place to start. Given that – and keep in mind my Prerelease is made up of younger players than anyone else's – here are a few statements.

There were 31 players at my Amonkhet Prerelease. There was one Gideon, one Liliana, and four Nissas opened. Add to that an Invocation and suddenly seven out of 31 players picked up cards that should be opened far less often than that.

It would makes sense for Wizards to stack the packs a little. You want the first players to be excited about the new set and eager to buy more cards. What better way to do that than to seed the prerelease packs with a higher rate of mythics or more sought-after rares?

In the end, I don't really believe that to be true. While it certainly feels like the packs are stacked, I'm certain there are stores where the numbers are low and no one talks about that because it just isn't exciting. Even with our store's cards, if I had focused on something other than planeswalkers, you might be hearing me complain about how our boxes were bereft of good cards.

"Check out what I pulled!"

Everyone else gets to show off what they opened during the Prerelease, but I'm always busy running the tournament, so I don't play in prereleases very often any more. What I do get are the foil promos, though! There are always a few extra packs from previous events that I open and sell the packs to the kids, as well as a few Prerelease packs from the current set that I open to give out packs for prize support. I keep the promos from those packs and every once in a while I pull a good one. 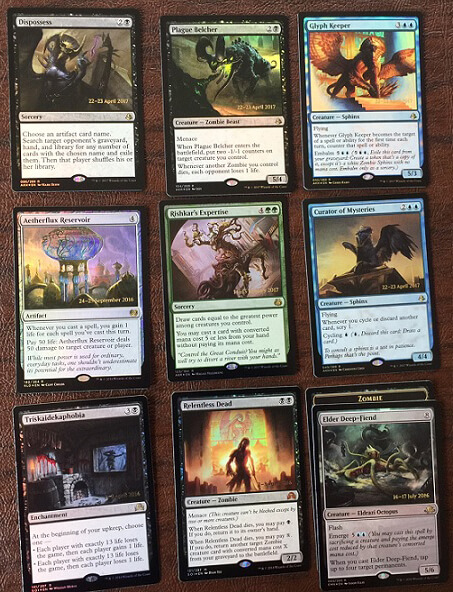 I was excited about Triskaidekaphobia since I'm looking at a 60-card casual deck and that is the fourth copy for me! I'll leave it to you to decide how well I did!

"Nissa, Steward of Elements is insane!"

Of the four players that had Nissa in their packs, two splashed her and two ran green-blue decks. Every player had good things to say about the card. It was clear that this is a planeswalker who will hit her ultimate ability and in a Sealed event and win games.

The players went a combined 11-5. Alex,wwho went 4-0 with his build, ran plenty of ways to tie up the game, along with mana ramp and cycling to find and play Nissa. His Prerelease packs were half green and blue and were so deep he chose not to run Drake Haven. He cast Nissa multiple times, but distinctly remembered casting her for eight, nine, 12, and 14(!) to win games. He also won the Gideon standee as a door prize! Sometimes the gods shine down upon you.

"Libraries are a great place for Magic tournaments."

I heard this from more than one parent who dropped their child off. I know some of them are hoping their child will look at the books lining the walls between games, but in over six years of running prereleases, I've never had a player want to check out a book.

The benefit for me is that they let me use the library during off hours. Technically, it isn't off hours since the library is open for business while I'm there, but it is not part of their regular hours. This means that it is just three of us running the Prerelease, the players in the library and the occasional person who walks by and comes in to check it out. The kids can be as loud as they want, and so can I, without disturbing the regular patrons. And when I call out the pairings for each round (no board to check the pairings), I can be plenty loud.

Most of the parents just like the library and the surrounding area. Some of the kids have played at regular stores where space is at a premium and cleanliness is not a huge priority. Not surprisingly, parents liked having a small sleepy library in a tiny neighborhood as a place for their children to play Magic. I think the local pizza shop likes it too, although they don't know why they are inundated with 25 children in half an hour on what must seem like random Sundays to them!

I didn't get to see the contents of too many Prerelease packs, but I did see two different ones that offered what I thought were interesting Minotaur builds. I suggested the idea to both players and was shot down both times. One player didn't think it would work, while the other player had Nissa, so I understand. Is there a deck there? Is Neheb, the Worthy, Ahn-Crop Crasher, Bloodrage Brawler, Minotaur Sureshot and Merciless Javelineer, along with two other Minotaurs enough? I know that plenty of games involved board stalls so I'm not sure if Minotaurs would be fast enough to get around that, but it looked like fun. Did anyone try it or run into someone who tried it?

"Want to get better at Magic? Play more."

When the dust settled, the two players who finished 4-0 are two of the players who attend the library's Magic Club every Saturday. V runs the Saturday tournament and Alex (the Nissa player from earlier) is there every time, trying out different deck ideas and styles. They play Cube, Commander and Standard all the time. While both had good decks, if you don't know what you're doing, you are still going to lose games. It turns out playing more often really does help you get better!

I normally give myself an hour to get organized and load up the van at my house before heading over to the library. I have a bunch of stuff to bring, including folding tables, land stations, and the cards themselves, along with everything else needed to run a prerelease. This time around, it only took half an hour.

I was at the library one hour before we were scheduled to start and everyone pitched in and we were ready to go in half an hour; faster than ever before. I have a great bunch of people who help run the Prereleases, but we are finishing faster simply because of practice. We know what needs to be done and the best way to do it now, so things move faster than when we had to create things from scratch. Knowing where to move the tables, and having the table numbers set to go. Having our check-in procedure set up moves things along as well. All of this makes for a better, less stressful prerelease for me and the players.

"Yes, two Samut, Voice of Dissent is a good thing!"

After the first round, one of our new players asked if I thought Samut, Voice of Dissent was any good. He had two copies but was just run over in his game. We looked at the deck and broke things down. The problem became readily apparent: not enough creatures. He was running red and green creatures exclusively and had only 10 to choose from in his packs so Samut was pretty much just a 3/4 double strike creature. Not bad, but she can do so much more. We looked through his packs and added white to bring his creature count up to 15. Still not where I wanted it, but he had solid removal and great combat tricks. He ended 2-2 and was thrilled to get to play some exciting matches.

Note: I've heard from a few people that the tournament organizer shouldn't be helping some players build their decks. I can understand the concern, but at our Prereleases I want the young players to learn how to build decks and have a good time. Helping the little guys with their decks just means that they get to challenge the better players a little more and have more fun with their decks. I like seeing the light turn on in their eyes when they see the synergy or learn some basic rules about sealed deck building. Not everything should have to be learned the hard way.

"The format is fast."

I know this format is supposed to be grindy, so you expect games to go long while players search for answers to the board stalls. We did not find that in our Prerelease. Two rounds each had one game go to time, while the other two rounds finished early. Perhaps things were straightforward. Perhaps the younger players didn't recognize missed embalm opportunities. I can't say why, but when younger players are consistently finishing three games in under 50 minutes, and there wasn't a single draw in the entire tournament, organizers and players are happy!