I'll admit I haven't been playing much Standard this year. Other than a brief foray into the format to test for a local Mythic Championship Qualifier (that I ended up skipping to play a sealed MCQ online) I haven't had much incentive to grind the format. Instead I've been focusing on enjoying myself, playing more Eternal formats and Limited. I try to practice what I preach, or rather preach what I practice, so this has been reflected in my writing. I looked back and counted that I wrote about Standard just a handful of times in the past seven months. 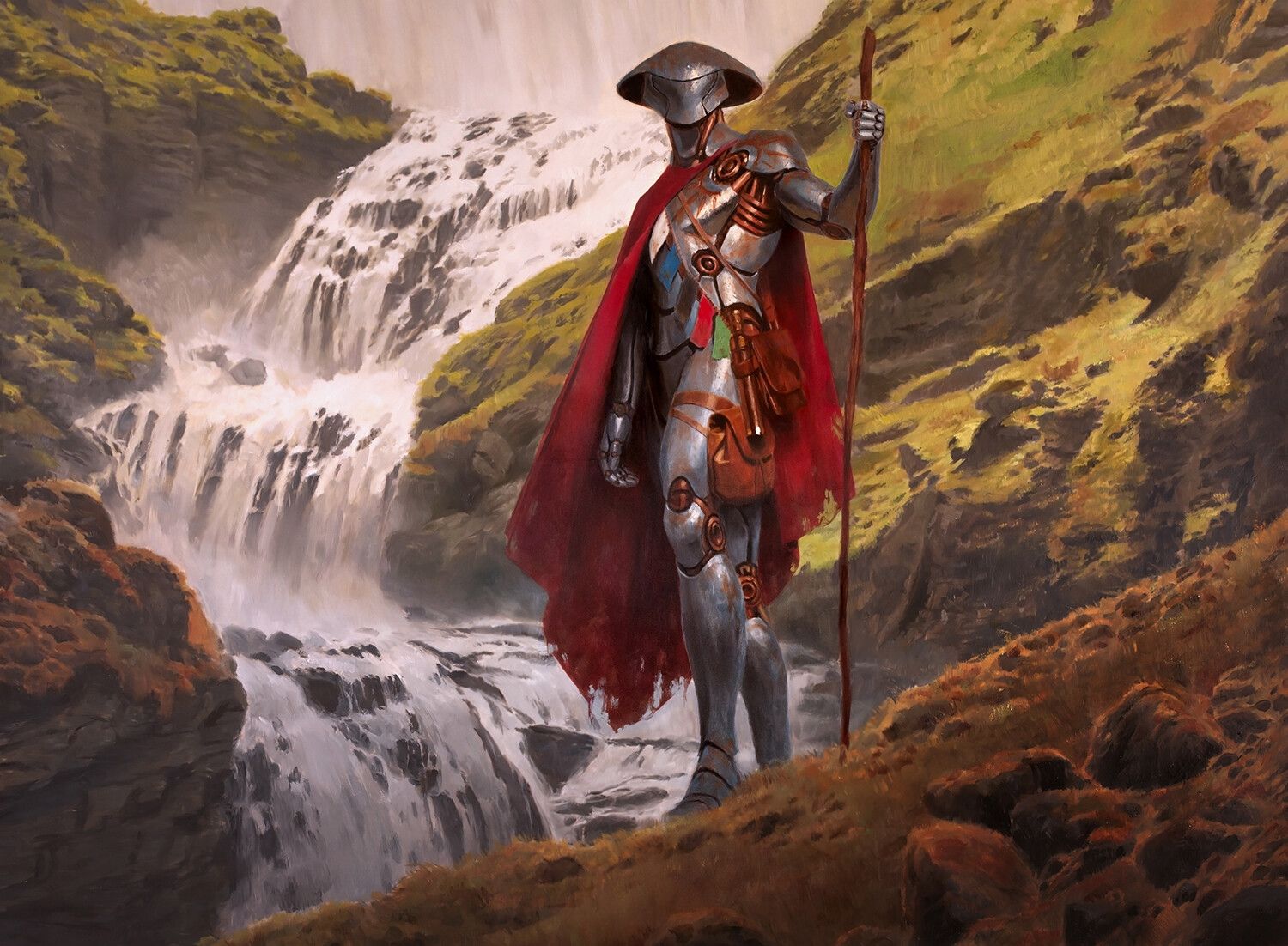 That said, I've always found Standard to be the most fun and interesting in the summer when the cardpool is at its largest, which it is now with Core Set 2020 until rotation this fall. There's a ton of cards to work with (almost literally) with over 2,000 unique cards in the format, which leads to nearly endless deck possibilities and a metagame at its most diverse. The format has come full circle from Ixalan, with the Dinosaur and Vampire tribes now fully fleshed out, and finally having their time in the spotlight as some of the best decks in the field. Other synergy-based strategies, like W/R Feather, also benefit from the large card pool providing a wealth of options. It looks like a fun time, so I've dug deep into some recent Standard results and looked for the coolest decks out there winning in style.

Just this last Sunday there was a Standard Classic event at the SCG Open in Columbus, and the Top 8 had some very spicy decks that wouldn't have been possible before Core Set 2020.

The standout deck of the event was the finalist, who played an innovative Jeskai deck that combines a flying theme around Empyrean Eagle with the multicolor theme of Hero of Precinct One.

The deck is tied together by its multicolor flying creatures, specifically Lightning Stormkin. It's an underappreciated card, especially in this meta with so many planeswalkers vulnerable to hasty threats, so it's cool to see this deck put it to good use. Feather, the Redeemed earns a slot here mostly on the back of its solid stats, but it does add some quality synergy with Depose // Deploy. Depose can be cast on it repeatedly for value, a nice alternative for its main mode of making two flying tokens to pump with Empyrean Eagle. This is the first time I've seen a deck like this so there's clearly some more room for development and tuning, but it's off to a great start.

Four-Color Elementals with Yarok, the Desecrated

Finishing in the Top 4 of the event was a Four-Color Elementals deck, which splashed into black for Yarok, the Desecrated.

Elementals is based around gaining value with enters-the-battlefield triggers, so Yarok, the Desecrated really super-charges the deck and makes it that much more powerful. It's about as snug a fit into a deck as I've seen, beyond the fact that it's an Elemental that will trigger Risen Reef and Omnath, Locus of the Roil. As a five-drop play it adds a nice dimension to the curve, which also helps with this list's other innovation, Neoform.

Neoform's effect looks truly great in a deck with so many enters-the-battlefield effects. Many of these also come with expendable bodies—I'm looking at Cloudkin Seer and Scampering Scorcher, which Neoform conveniently puts into the graveyard for Thunderkin Awakener. Neoform helps the deck find its best cards more often, but also opens up a toolbox of one-ofs, which this list fills with a pair of Cavaliers to give it some options. It all comes together into a deck that looks more powerful than the typical Temur Elemental decks I've seen, giving up the one-dimensional aggressive nature of Creeping Trailblazer for a more value-oriented plan that benefits from the consistency added by Neoform. It's definitely where I'd start my exploration of the archetype.

The innovation displayed in the SCG event is just the tip of the iceberg of what's happening on Magic Online, where I found all sorts of decks doing their own thing. For example, Bant Scapeshift has risen as the new hottest deck in Standard, but online I found a very interesting take on the deck that replaces white with black.

This deck argues that Casualties of War is a real asset in this metagame: a powerful catch-all effect that will buy time for Scapeshift to end the game. Instead of Time Wipe, the deck uses Massacre Girl, which is often just as good as a true wrath effect, but with the upside of being a creature. I'm less convinced by Legion's End as a removal spell for cheap creatures, but I certainly like the sideboard Duress, which gives this deck some great counterplay against control decks and the mirror match that white versions lack. It's not the only black version of the deck I came across in my search, and I suspect it won't be the last.

Naya Feather with Season of Growth

I mentioned W/R Feather as a deck that gained from M20, specifically Gods Willing as a historically-proven protection spell that's more versatile than Sheltering Light. The deck has quietly been in the Top 8 of the last three Standard Grand Prix (Denver, Taipei and Kansas City) and is the real deal. I'm one for sticking with the established and proven decklists, but if you're looking for innovation, one possibility is to use the new Season of Growth as a draw engine for the deck.

Season of Growth essentially turns every creature into a Feather, the Redeemed, generating value from every spell that targets them. Combined with the passive ability that adds a scry trigger to every creature, you have a very strong value engine that seems incredible against grindy decks. Green also adds Gruul Spellbreaker, which plays well in the deck with its Hexproof effect, while Domri's Ambush's one-sided fight effect is reusable with Feather. It adds up to a deck capable of some truly busted starts.

A deck that really looks to benefit from dipping into another color is W/R Angels, which now has an incentive to add black for Kaalia, Zenith Seeker. I originally discounted this as a Commander card, but it turns out Standard has more than enough tools to support it. As an efficient creature combined with a powerful card selection effect that adds value, it almost reminds me of Rogue Refiner, and it's certainly good enough to build a deck around. Throw in Bishop of Wings as another way to generate value, and you have a deck good enough to finish 12th in the last MCQ on MTGO—and a potential sleeper deck just waiting to break out in paper.

Going into black for Kaalia, Zenith Seeker also opens up Seraph of the Scales, which is one of the better Angels available in Standard and a nice way to mix up the four spot on the curve beyond the legendaries Aurelia, Exemplar of Justice and Shalai, Voice of Plenty. Because Kaalia can also find Demons and Dragons, the deck includes Skarrgan Hellkite, Doom Whisperer and Demonlord Belzenlok for a dash of flavor. They'll be nice options to have when Kaalia reveals multiple choices. Supported by a mix of removal spells, this is a classic midrange deck full of individually high-quality cards, and any Angel synergies are really just a nice bonus.

Reanimator with Drakuseth, Maw of Flames

My favorite Standard deck this week has to be Grixis Reanimator, a strategy not often seen in Standard. Lately Wizards has been careful about printing large creatures that will be too powerful to cheat into play, but they've come pretty close with Drakuseth, Maw of Flames. It will win just about any game where it's able to attack, and the deck uses Bond of Revival to give it haste and make that happen ASAP. Bond of Revival plays around sorcery-speed removal and forces the opponent to have an answer immediately or suffer Drakuseth's attack trigger.

M20 also provides Tomebound Lich as a nice enabler for the deck along with a useful piece of board presence. Plus, it's a creature that can potentially be reanimated itself in a desperate situation. This list has a green splash for Tamiyo, Collector of Tales since it proved so useful in Command the Dreadhorde decks, where it filled the graveyard while digging for the namesake spell. In this deck it finds Bond of Revival while milling toward Drakuseth. There's obviously a lot of potential tuning that could be done here, but the idea is sound and it's starting to prove itself, so it's definitely something to have on your radar.

U/B Control with Cavalier of Gales

A few weeks ago I spoke highly about M20's cycle of Cavalier creatures, and I identified Cavalier of Gales as a relatively unimpressive card compared to the splashy effects on others in the cycle. But, I said it might make the grade just based on its all-around strong rate. Big flying creatures and drawing cards are just that good. I brewed Grixis Control as a possible home, but it has now appeared in a Sultai Control deck, where it's a great finisher for the attrition-based strategy.

The idea is that Cavalier of Gales is great in a deck full of cheap disruption cards, where it helps to grind out the opponent and stabilize the battlefield. This deck has plenty of those, including Disfigure and maindeck Negate, along with a dip into green for Assassin's Trophy. The list doubles down on the attrition strategy with a full set of Drawn from Dreams, a high-quality piece of card advantage that helps decks like this pull ahead. It's a straightforward, classic control deck, but Standard holds the potential for control decks that are far less conventional…

The wildest deck of the last week has to go to Ali Aintrazi, who showed up to the Fandom Legends streamer tournament with a Five-Color Lich's Mastery deck.

Ali has been playing with Mastermind's Acquisition and Lich's Mastery for months, but this iteration has some great new additions. War of the Spark added some busted blue planeswalkers, but also Oath of Kaya, which as a lifegain spell works very well with Lich's Mastery. M20 adds Drawn from Dreams as a card advantage spell to tutor up, while Golos, Tireless Pilgrim is card advantage and mana fixing that doubles as a way to take over the game with its activated ability. With Mastermind's Acquisition and a sideboard of one-ofs, this control deck can find answers to just about any problem it will encounter.

Golos, Tireless Pilgrim is just a bit of flavor in this deck because it can support the ability, but the week before Ali used a different brew designed to truly make the most of the creature, and took it to a strong Top 4 finish.

With a set of Risen Reef, the deck can easily accelerate into Golos, Tireless Pilgrim. Wilderness Reclamation adds another way to generate mana towards its activated ability, allowing for multiple uses a turn to bury the opponent. Nexus of Fate provides a high-impact spell to hit and cast for free with the ability, as well as an additional sort of win condition. Removal spells and sweepers round out the rest of this controlling deck. The deck is a major beneficiary of the scry lands, using nine of them to smooth draws with scry triggers, and shows they're cards any deck without one-mana plays should seriously consider.