"Should we add some Planechase?" John asked eagerly. Everyone in my group tends to enjoy a game with a little more chaos, and Planechase brings just the right amount to our games. Once the suggestion was made, it wasn't long until a stack of Planechase cards sat in the middle of the table!

Each of us drew our opening seven, the top plane was flipped, and we were underway!

I started first, playing an Unhinged Forest from my 60-card deck that I've titled "Merzuri." It was the first go-round for the deck that uses Meren of Clan Nel Toth and Ezuri, Claw of Progress in an attempt to abuse the experience counters they produce.

The deck tries to churn two-power-or-less creatures onto and off of the battlefield, building up experience counters. These smaller creatures return to the battlefield due to Meren and get huge due to +1/+1 counters from Ezuri. At least, that's the plan for the deck. I expected that I would have to increase the number of sacrifice outlets (just the two Korozda Guildmages right now) to make sure creatures were dying fast enough, but enough of the creatures sacrifice themselves that it hasn't been an issue so far.

Amy was next up. Her deck uses Willbreaker and a handful of wizards that tap to do a point of damage to target creature (regularly referred to as "pingers"). Amy loads up her decks with all sorts of tricks that generally involve tying your game up in knots. Intruder Alarm was the misery involved this time. Knowing that every time I played a creature meant she would get to untap her Wizards really tied my game in knots – only three spells in my deck aren't creatures!

Amy is a good player with interesting decks, so I often go after her early on, since I don't really get a chance to once the game develops. She wasn't finding a Willbreaker early on, but a Suq'Ata Firewalker was keeping things interesting.

Jesse was third in turn order. He had built a new vehicle deck and this was its maiden voyage. Jesse has been part of my Thursday night group longer than anyone and is the epitome of what everyone wants in a casual group. He can build decks that are an absolute misery to play against (I've seen a few of those!), but instead revels in our group's laissez-faire attitude and builds slow, crazy decks that do all sorts of bizarre things. He runs theme decks, burn decks, control decks, and everything in between. Add in his encyclopedic knowledge of pretty much every card from the first 20 years of Magic, and a Vorthos understanding of Magic storylines, and you have Jesse.

Jesse generally eschews the expected, expensive cards and finds the surprising card that has great synergy with the rest of his deck. His vehicle deck was no exception, getting out to an early start with Speedway Fanatic and Gearshift Ace as pilots for a Bomat Bazaar Barge. Renegade Freighter soon followed, leaving the rest of us to catch our breath!

John was the fourth player in the game. His deck milled itself to get to threshold for Hunting Grounds. He was playing delightful cards like Sylvan Primordial, Leviathans, and other monstrous creatures. John's deckstyle tends to stick closely to a theme, while packing his deck with tons of responses. John's decks will play counters, removal, bounce, or burn, depending on the colors in the deck. I can generally count on John to have a way to deal with pretty much anything anyone plays.

The early game saw John and I ramp quickly, each of us getting well over 10 lands onto the battlefield. Amy wasn't far behind and Jesse was taking every opportunity to crash his vehicles into us, especially since he just wasn't getting the land he needed to do more.

The game was moving from one plane to another in fairly rapid succession. For those unfamiliar with Planechase, you flip the next card in the planar deck when you roll the planeswalker symbol on the planar die. Check out Horizon Boughs. 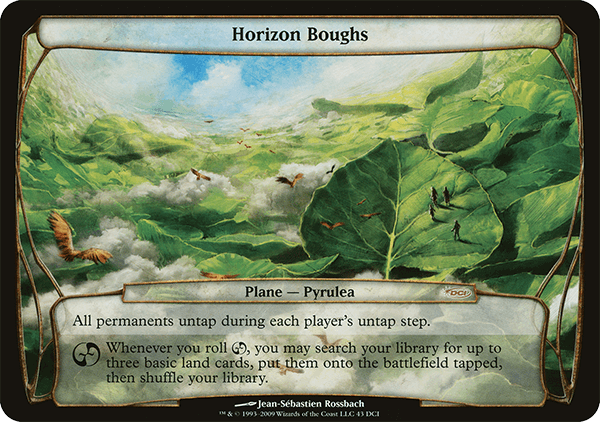 When your game is on this plane, all permanents untap during each player's untap step. Some decks like this plane far more than others, so some players will roll the planar die to try and leave the plane. To get the chaos effect (the effect on the card with the funky symbol), you also roll the planar die. Thus, even players who like the plane they are on will often take the chance and roll the planar die, trying to hit the chaos symbol and get that effect. Since you can roll more than once per turn if you are willing to pay one more mana than you did the previous time you rolled that turn, players will often roll more than once. When you think of the times in games when you had extra mana because you weren't drawing the spells you needed, or just had extra mana to use, you can see how rolling repeatedly can be a good thing. Add in the fact we were defying the odds and hitting either chaos or planeswalk half the time (it should only be one-third), and you can see why the planes were flying by!

We were on planes that let us play any number of lands (Naya), gave us life (Aretopolis), and even had one situation where, thanks to Spatial Merging, we were on two planes at the same time (Gavony and Lethe Lake)! All the while, the battlefield was getting crazy until we finally reached what I think is the most bizarre thing I've seen in Magic! Let me set the stage. 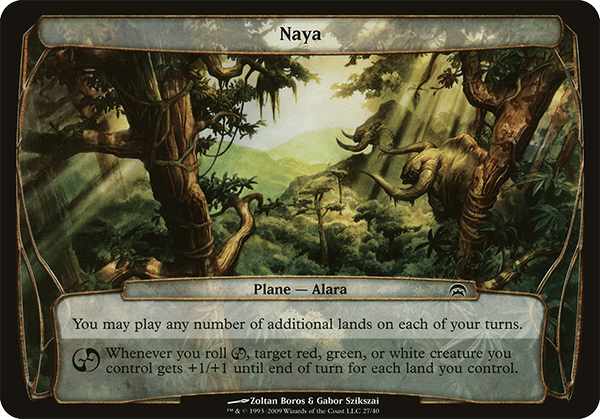 I had Meren and Ezuri, each with four +1/+1 counters on them, on the battlefield, and five experience counters. I had a couple other inconsequential creatures, and a Tree of Perdition. Life totals were all below 13, except John, who was at 27.

Speaking of John, he had a Sylvan Primordial, Hunting Grounds and Karmic Guide in the mix. Jesse had a Renegade Freighter, along with the Speedway Fanatic and Gearshift Ace, but they were inconsequential because of Amy. Amy had a Prodigal Sorcerer, another creature that tapped for a point of damage, a Willbreaker, and Godhead of Awe. The Godhead made the vehicle useless, since it would only be a 1/1. Jesse was searching for ways to get rid of the Godhead, but had found nothing.

Amy was flying over my defenders with the Godhead, slowly shrinking my life total. At one point she also took Meren, pinging him with the Prodigal Sorcerer. John was getting a few big creatures onto the battlefield with the Hunting Grounds, and I was pretty sure it was just a matter of time until he got rid of that Godhead and killed everyone, so I opted to make things more difficult for him and tapped the Tree of Perdition, swapping the Tree's toughness for John's 27 life.

You do remember Godhead of Awe was on the battlefield, right? John's life total shrunk right past 13 and all the way to one. He was now alive only for as long as Amy chose to let him be alive, since she could tap either of her pingers to take John out.

This is when John played Emrakul, the Promised End. He was thinking it was either now or never, so go out in style! John chose to take my turn, which only made sense. Jesse didn't have enough showing on the battlefield to make a difference. If he tried to take Amy's turn, she would just kill him immediately, so that made no sense. That left only me. I was hoping he would use the opportunity to swing my creatures at Amy, essentially giving me two turns. Realistically, what made the most sense was to find a way to force her to tap both her pingers, then use my Tree of Perdition to swap his life total for the Tree's toughness, bringing him back to 27 and protecting himself through Amy's turn.

The rules are clear about permanents in on the battlefield and what happens when a player dies during their turn, but not nearly as clear about what happens when they die on an opponent's turn, while controlling another player's turn. We looked at the rules and couldn't decide what the correct outcome should be, so we opted for the casual approach: what option would create the most bizarre situation?

We decided John would get to play my extra turn, no matter when he was killed. Amy opted to wait and didn't kill John until he tried to tap the Tree of Perdition to bring his life total to 27. *See the Judge's Note at the end of the article for a rules explanation.

After John had done everything he could with what I had, he realized we were on the plane of Skybreen. 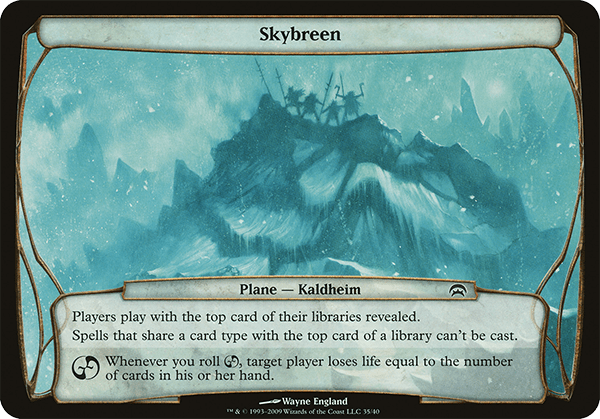 Since there was nothing left to do, John opted to use up my mana rolling the planar die. His first roll hit chaos. Jesse had 3 life and five cards in hand, so John targeted him and took him out of the game. John paid a mana and rolled again, hitting the chaos roll a second time! This time he targeted Amy, taking her life total from 8 to 4 with four cards in hand. John tapped the last of my mana and rolled, hitting the chaos roll for a third time in a row, winning the game!

We weren't sure if John had won the game or I had, but it was undoubtedly the weirdest game we'd ever played!

Thanks to everyone in the Judge community who helped with this article. All errors are definitely mine!

Given the scenario above, when John took the point of damage, he should have left the game. Bruce should have taken his turn as normal... then would also have received an extra turn, had it been necessary. Since the Emrakul cast trigger resolved (it is not a delayed trigger) it still happens, even though John and Emrakul are gone.