Since Vampires are one of THE most popular tribes in Commander, a surge in new Vampire cards is bound to cause some older cards to skyrocket in price...although they're not the only cause for recent price spikes. Let's take a look at some of the more notable cards that spiked due to Crimson Vow.

Fans of sea creature Commander decks may be excited for Runo Stormkirk. Runo Stormkirk is a fascinating Dimir Vampire Cleric that transforms into a Kraken Horror named Krothuss, Lord of the Deep. The Kraken's main appeal is its ability to create two creature token copies of another target attacking Kraken, Leviathan, or Octopus. Transforming Runo Stormkirk is fairly achievable, thanks to its enters-the-battlefield ability. Another card with one reprint that spiked in price is Patron of the Vein. It's an excellent curve-topper, as it distributes +1/+1 tokens to each Vampire you control whenever a creature controlled by an opponent dies. Anticipation of new Commander-playable Vampires in Crimson Vow caused Patron of the Vein to surge in unit sales on September 12th.

Patron of the Vein's price increased from $10 to $21 between September and October before finally settling around $17 as of November 10th. However, Patron of the Vein got spoiled as a card inclusion in Crimson Vow's Vampiric Bloodline Commander deck. As such, expect the Patron's average market price to fall soon. Although there is a double-sided Edgar Markov in Crimson Vow, copies of the Commander 2017 Edgar Markov continue to sell for over $100 each. According to the chart below, player interest in Edgar Markov drove unit sales since September!

Edgar Markov's average market price steadily increased from $60 to $80 throughout September and October, and on October 28th, it soared from $80 to $120 — that's 50%! Organic demand appears to be the driving force behind Edgar Markov's ascent to a $100+ market price. 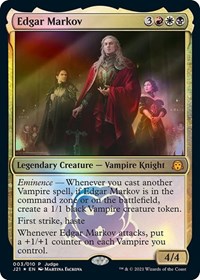 Players interested in purchasing a copy of the most famous Vampire tribal commander must pay a premium. Don't expect the new judge promo for Edgar Markov to sell for a discount, either. Based on the packaging reveal for Crimson Vow back in August, players anticipated Olivia Voldaren's return to Innistrad. While neither of Olivia Voldaren's previous printings recently spiked in price, her average market price rose gradually between July and October. Abundance is a four-mana green enchantment that spiked in both price and unit sales due to Cultivator Colossus. Abundance supplements card draw, with the option to choose land or nonland and reveal cards from the top of your library until you reveal a card of the selected kind. Notably, you get to put all other cards revealed this way on the bottom of your library in any order.

After Cultivator Colossus got spoiled on November 1st, the average market price for Abundance catapulted from $1 to $5 or 400%. Abundance's market price continues to hold around $5 for multiple versions. Based on the TCGplayer historical sales data, individuals speculated fervently on Abundance. There's an eye-opening sale where a single transaction contained 170 copies of Abundance from Commander: Zendikar Rising for $0.54 each! You may be wondering how Abundance and Cultivator Colossus synergize together. Cultivator Colossus has an enters-the-battlefield ability that allows you to put a land from your hand onto the battlefield tapped, and if you do, to draw a card and repeat the process. When you draw a card to repeat the process, Abundance's ability replaces the draw effect, thus enabling you to put a land into your hand. You may continue the process until you've put all lands from your deck into play. By choosing land and failing to find one in your library, you then get to stack the entire library in any order.