With Grand Prix Dallas happening this weekend, I wanted to talk about what is currently the most successful white weenie variant in the format. I've been playing a lot of Green-White Hatebears and also some White-Blue Hatebears after Spell Queller was printed, but White-Black Eldrazi has surpassed either in popularity and I ranked it #12 in my Top 20 Decks in Modern article last week. There is a core shell but also a bit of room for variation and innovation if you want to put your own spin on the archetype. At the end I also have the results of the Magic Kaladesh Finance Game.

This is what I would recommend for this weekend:

Some lists run 22 lands, but 23 is the most widely agreed-upon number. The biggest question is whether Concealed Courtyard is worth a slot in the deck. Ordinarily it would be better than Caves of Koilos, but our eldrazi (Thought-Knot Seer and Eldrazi Displacer) specifically need colorless mana, so Caves of Koilos is actually the only land in the deck that can provide all three "colors" in our deck. This makes it indispensable in the deck. The other two dual lands in the deck are Shambling Vent and Godless Shrine.

Eldrazi Temple allows us to cast Eldrazi Displacer on the second turn and Thought-Knot Seer on the third turn. Ghost Quarter is similarly important to the deck, comboing with Leonin Arbiter to become Strip Mine and thus make Thalia, Guardian of Thraben that much stronger. The Plains and Swamp are basically in their to find off opposing Path to Exiles and Ghost Quarters and also a way around Bloom Moon since we have eight ways to search them out in our own deck (our own Paths and Quarters).

Aether Vial is the backbone of the deck and the premier opening play. You almost always want to play it on the first turn, I would say least 95% of the time no matter what the situation. The lone exceptions are when you are facing a burn deck on the draw and dealing with their one-drop will save you more life or if you are facing a combo deck and have the appropriate disruptive spell in hand AND have reason to believe they are about to "go off" the next turn. If the opponent leads with a first-turn Pithing Needle naming Aether Vial, you'd also rather lead with Shambling Vent, but if you're ever in doubt the default should be to cast the Aether Vial. I also mulligan fairly aggressively with this deck, trying to find an opening hand that contains Aether Vial. I also keep almost any hand that contains a Vial and an untapped land.

Path to Exile is simply the most efficient removal spell in the format. It deals with 99% of the creatures in the format and if we have Leonin Arbiter on the battlefield it comes with no drawback. Slam dunk play all four copies of both these spells.

Leonin Arbiter is the bane of so many decks in Modern, mostly because it slows down opposing fetch lands considerably. It's often the best second-turn play in the deck, especially on the play. It also puts a damper on decks that want to search their libraries with cards like Search for Tomorrow or Primeval Titan. It gets boarded out against decks that don't search their libraries or that only have one or zero basic lands because then you can just use your Ghost Quarters and Path to Exiles normally without drawback.

Tidehollow Sculler, alongside Thought-Knot Seer provides enough hand disruption to keep the opponent having to draw what they need off the top of their library. In conjunction with Eldrazi Displacer you can target either during the opponent's draw step to keep them from being able to play the card they drew unless it's an instant. You can also do tricks like stacking the Tidehollow Sculler's enters-the-battlefield trigger and then blinking it with Eldrazi Displacer. The result is that you choose a card to put under the Sculler and then choose another card to permanently exile.

Thalia, Guardian of Thraben is excellent against Infect, Delver, Blue-Red Prowess, and any deck that wants to gain velocity by chaining cheap instants and/or sorceries together (read: any Gitaxian Probe deck). It's also quite useful against cascade because both spells get taxed. This makes Living End effectively cost five mana to resolve. I board out Thalia against decks that are predominantly creature-based unless the 2/1 first strike body is especially good.

Flickerwisp is filthy off an Aether Vial with three counters, allowing all kinds of dirty tricks. But even without it you can target Wasteland Strangler, Thought-Knot Seer, Tidehollow Sculler, or Blade Splicer for value. You can also often get value from targeting an opposing permanent such as a token or a creature that loses value from being reset (Arcbound Ravager, etc). If you vial in the Flickerwisp on the opponent's end step or blink it with Eldrazi Displacer on their end step then the target will not return until your own end step since the "comes back" trigger checks at the beginning of the end step. I'll often take an opponent off Tron by targeting one of their tron pieces on my own end step, meaning they won't have access to it until their own end step, which is too late to cast any of their big sorcery-speed cards.

The flex spots in the deck are really limited to the last five cards. Wasteland Strangler is powerful and we have enough exile effects to support it, but it's weak in multiples in a lot of matchups, so I chose to play the fourth copy in the sideboard instead of the main, which seems to be the consensus. The rule of thumb is pretty easy with Wasteland Strangler - If it kills stuff then bring in a fourth copy. If it doesn't then board them out. Blinking Wasteland Strangler can feel very unfair.

Most lists run two Blade Splicer or two Thalia, Heretic Cathar. The lists are pretty much split down the middle as far as which is better. Since Thalia is legendary, the first copy is considerably better than the second one. So if enough people believe two copies are correct, they would be even more confident that the first copy is correct. Given that we have Eldrazi Displacers and Flickerwisps, the first Blade Splicer is also better than the second one since the second copy will often be redundant. In the interest of diversity I therefore believe there is sufficient reason to split them one and one as the final slots in the main.

As I said already, Wasteland Strangler comes in against any deck where it kills stuff, so basically Collected Company decks, Delver, Merfolk, Hatebears, Infect, Burn, Affinity, and Bant Eldrazi. I don't love it against Jund/Abzan, but I want to keep two to three copies in post-board against them.

Burrenton Forge-Tender and Kor Firewalker come in against the Burn decks. The kithkin can also come in against decks running Pyroclasm or Anger of the Gods, but not against Kozilek's Return since that is colorless.

Dismember is mostly for Infect but can also come in against any deck with creatures it can kill where the life loss is not critical. Zealous Persecution is great against Affinity, Infect, most Noble Hierarch decks, and Young Pyromancer.

Rest in Peace is a concession to dredge, but is the best answer to any graveyard shenanigans. I bring in some copies against Tarmogoyf decks too since we don't rely on our graveyard as a resource and can therefore board it in as a straight value card. It even helps our Wasteland Stranglers by permanently turning them on.

Stony Silence is our biggest weapon against Affinity and Lantern Control, and is also good against Ad Nauseam and Tron. Unlike Rest in Peace, we can't bring Stony Silence in as a minor value card since it shuts off our best card in Aether Vial. We therefore only bring it in when it has a considerably bigger impact on the opponent's plan than on our own.

Blessed Alliance is the newest hotness in Modern. It's a great answer to all the red decks, acting as a two-mana removal spell early, a life gain spell in a pinch, or both. It can also provide for some opportunistic blowouts by untapping creatures to block with mid-combat. It's also an answer to Slippery Bogle as long as they don't have Leyline of Sanctity out.

Overall the deck is strong. It has late game soft-lock potential with Eldrazi Displacer blinking Thought-Knot Seer or Tidehollow Sculler. It can also generate big advantages in the midgame by blinking Wasteland Strangler, Flickerwisp or Blade Splicer. It also can come out fast with Eldrazi Temple. And best of all, nearly every card in the deck is disruptive, applies pressure or, most commonly – both!

As it turns out, this game was harder than I intended for it to be since my predictions were for the most part pretty spot-on. Nearly all the cards I said would spike did and all the ones I said would tank likewise did. The only card I was definitely wrong about was Torrential Gearhulk, which I said to sell at just over $5 and it ended up nearly quadrupling in price to $20.

There were a few smaller cards I said to sell that instead rose in price. Noxious Gearhulk went from $5 to $8, Metallurgic Summonings rose from $2 to $4, Panharmonicon rose from $2.50 to $4, and Aetherflux Reservoir went from $1 to $1.25.

Of the cards I said to buy, all the big ones went up, a handful of the smaller ones stayed the same, and only three of the 15 dropped in value. Ghirapur Orrery dropped from $.75 to $.50, Lost Legacy dropped from $1 to $.60, and Kambal, Consul of Allocation dropped from $1.50 to $.75. Of the 30 cards included in the article, I correctly picked 22 of 30. This meant the two decisive plays that resulted in a chance to win were to (1) buy Torrential Gearhulk while (2) dodging all the landmines. In this case the landmines were the 22 cards I predicted correctly.

Some landmines were bigger than others. Basically anyone who said to sell Smuggler's Copter at $6, Aetherworks Marvel at $5, Depala, Pilot Exemplar at $.75, Pia Nalaar at $.50, or Bristling Hydra at $.50 lost too much value with those mispicks to win the contest. Similarly, anyone who said to buy Nissa, Vital Force at $20, Dovin Baan at $14, Saheeli Rai at $14, Rashmi, Eternities Crafter at $4.50, Authority of the Consuls at $2.25, or Syndicate Trafficker at $1.50 would have been better off sticking to my advice to sell.

The optimal entry would have been:

Nobody picked flawlessly, but of the 110 or so people who played the game, a handful of people made profitable picks and one player's entry stood out among the rest.

Congrats to Colton Klein, who won the contest by picking the following cards!

His only mispick was Fleetwheel Cruiser, which went up from $1.50 to $2. This was still enough to out-compete all the other entrants, mostly on the back of the Torrential Gearhulk pick. Most entrants had at least one very costly pick, such as selling Smuggler's Copter or buying a planeswalker.

Congrats Colton Klein, you win a Torrential Gearhulk with a special added throw-in! 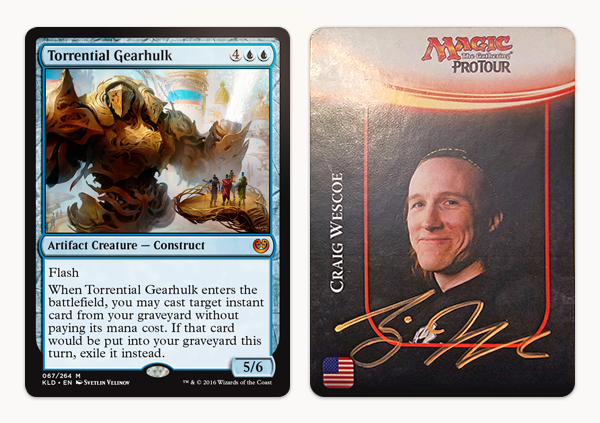