● For those of you who have been enjoying my short mini-series on luck, I plan to close that out a week or two after the Pro Tour. We've touched on how specific card decisions can affect your luck, how doing stuff under your control can affect what happens with variables [seemingly] outside your control, and even how to predict the future! But you know who takes luck to the next-est next level? Black Cat (Felicia Hardy, not the 1/1), Longshot, or Scarlet Witch. Can you develop actual luck superpowers?● Probably going to do a Make the Play Monday next week. :)● But for this week, I'm answering a specific question from TCGplayer co-boss Ray Moore, or, "Why'd He Do That?"

The larger concepts of Magic (most importantly card advantage) have been talked about for years. But not every player - or even every player reading this - knows how (or when) to put Magic's central concepts into practice.

Two decades or so ago, when Brian Weissman was first poking his card advantage beak out of the eggshell of Magic theory, card advantage itself was the hot technology. Technology has come to carry with it connotations of dancing electrical currents and flashing lights, teleportation netting, or at least the hottest new smartphone; but technology, any technology, is really just "a way of doing things."

Advancing technology hopefully comes with it better and better results coming from ways of doing things further and further along the line. If better smelting practices that allow us to forge iron (and therefore produce longer swords capable of being swung, rather than shorter swords that rely on stabbing motions) become available, you probably don't want to be the guy with a bronze shield or a shirt of bronze discs in a clash of technologies.

Magic technology is similar. If everyone around you is at caveman level, the simple idea that you can be playing in such a way as to accumulate more cardboard than your opponent is going to give you a powerful advantage in the world of how things are done. You will have more options, you will keep more materiel on the battlefield, and you will recognize that you can string your life total along as a vector for more cardboard (and more options later).

But if "everyone" is capable of playing with card advantage in mind, that changes things.

And in fact, today, most tournament players operate with some notion of card advantage in mind as they make their decisions. Here's the cool thing that Magic boss Aaron Forsythe says about it though: "Understanding the basic concepts is part of what takes a player from complete newb to a position of relative competence. But it is knowing when to deviate from the basic concepts - to unlearn them in the moment, sort of - that moves players from good to great."

Let's consider this play (which was actually the one Ray was thinking about when he posed the question to me):

In the semifinals of the TCGplayer Invitational, Pro Tour Champion and Hall of Famer Paulo Vitor Damo da Rosa plays a third turn Drown in Sorrow against his Monored opponent, Anthony Armenio. 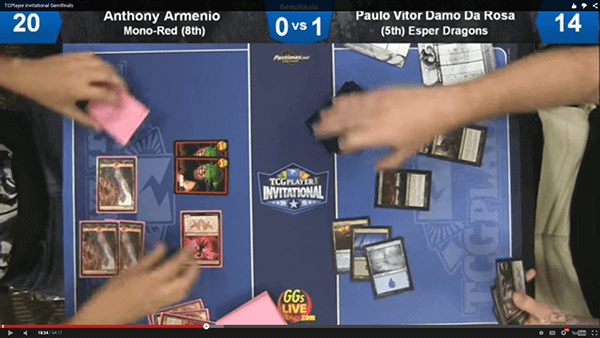 In the world of Drown in Sorrows, this was a pretty good one. It got three creatures: a Lightning Berserker and two 1/1 Goblin Tokens. 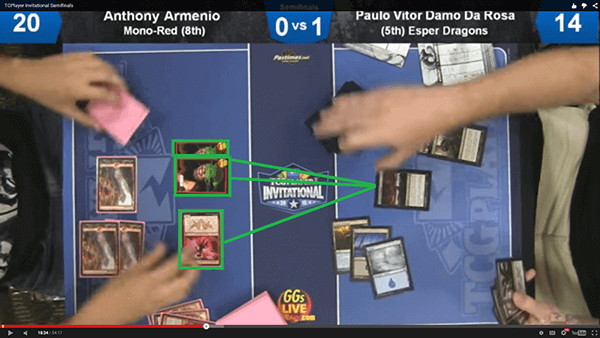 The Goblin Tokens came off of a Dragon Fodder, so while the Drown in Sorrow traded for three creatures, it got essentially two pieces of cardboard; and Lightning Berserker-pumps notwithstanding, BB1 for RR1 in materiel. Plus, PV got to Scry. All-in-all a plus-exchange where the Control (Esper Dragons) deck got to trade one card for more-than-one-card at par mana; or essentially "exactly what a Control deck wants to do with a card like this, and when."

By all indications, Paulo was planning on playing the Drown in Sorrow in his third turn. We actually know he drew a Foul-Tongue Invocation that turn, so it's not like a topdeck influenced his plan since the previous turn. 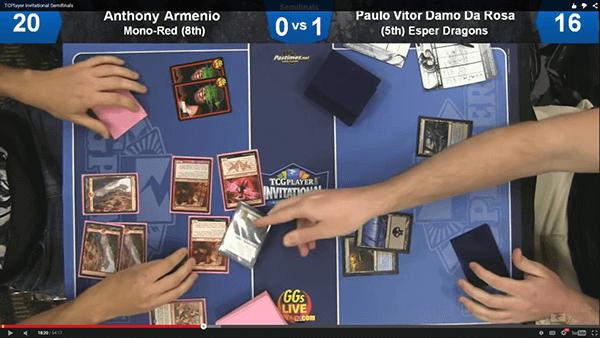 It can be tough to unpack plays like this. Commentators can sometimes ooh and ah, and sometimes come up empty on things to say. When you ask some masters later, you will too often get an, "it was obviously right" before they walk away shaking their heads. But why was it obviously right? Is there something I can take away from this to do better the next time, myself?

How about it here? Given that PV is very likely to mop up all the creatures - Foundry Street Denizen(s) inclusive due to the unique nature of Bile Blight as a card - as soon as he can play his third land, from a card advantage perspective, you might be asking yourself: Couldn't PV have saved a Bile Blight and gotten "more" card advantage from his Drown in Sorrow by taking this hit? Aren't we supposed to play to maximize card advantage?

Let's take a moment to look at this battlefield. The two lands that are tapped on Armenio's side of the table are tapped for Dragon Fodder. Dragon Fodder has put two 1/1 Goblin Tokens onto the battlefield. That means that each of the Foundry Street Denizens has received two buffs, for a total of four damage in just buffs. 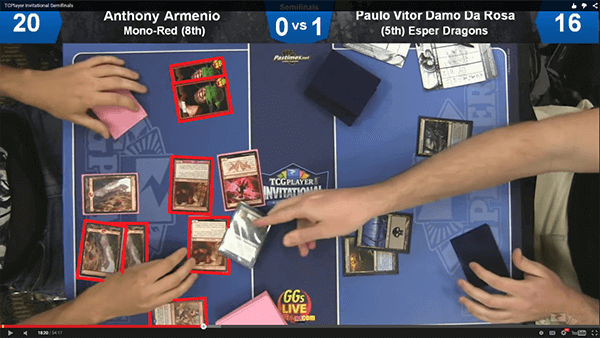 Here is a question you can ask yourself in this spot: Would you rather...

While I agree with PV's play, ultimately, it is not at all clear that one play is better than the other in every universe, in particular given what we already know (that Drown in Sorrow is likely going to mop up all the creatures in half a turn's time). And moreover, the card advantage angle may not be intuitive.

Let's go back to thinking about this from purely an exchange of cards lens. Armenio plays many cards that do little or nothing but damage PV directly in this matchup. Because it starts with hexproof, it is tricky for Armenio to get Dragonlord Ojutai with Stoke the Flames (and in other games PV did clever things like casting Foul-Tongue Invocation pre-combat in order to take Armenio off of Stoke the Flames mana / convoke just to make sure). Since we know that Armenio plays cards like Wild Slash even in sideboarded games, we can make multiple transformations that end up essentially card-for-card in PV's favor.

The classic Philosophy of Fire bar says that a Red Deck is usually willing to value two damage at one card. Even in sideboarded games in 2015 Armenio is continuing that tradition by playing with Wild Slash.

So one way of thinking about this play is this:

The proposed universe's five-for-one is cool, right? That's kind of what PV does with the Bile Blight itself: he gets two Foundry Street Denizens and the equivalent of three Wild Slashes in a single exchange.

There is a little bit of scarcity theory here too. While damage doesn't always matter, it matters a ton when one deck is most likely to beat the other one by spewing Lightning Strikes and Stoke the Flames while the opponent is tapped for a Crux of Fate. PV has relatively few ways to interact with burn spells directly. He needs a Dragon to make Silumgar's Scorn work, or to gain life from Foul-Tongue Invocation. By using creature removal in exchange for life points at this early stage, he can actually be saving up resources for some future situation where he would need a more precise answer.

Of course you don't have to translate PV's play into classic Magic theory. Losing half his life and going to eight is simply dangerous against a deck with Stoke the Flames and the mana to cast it.

No, PV didn't end up winning this particular game. Despite playing back-to-back Dismal Backwaters the next couple of turns (invalidating two-thirds of a Lightning Strike), PV eventually lost to a Wild Slash for the last two. He had no shortage of creature removal, though; with his choice of Ultimate Price or Bile Blight down the line, and even a Foul-Tongue Invocation with no playmate. But if he had made the opposite play? He would simply have lost sooner, and with fewer chances to Dig himself into some relevant plays to come back.