For anyone like me who loves to pour over the pages of every tournament result, last weekend was almost overwhelming. Two Players Tour events and two MagicFests have elevated the Pioneer format to Magic's top competitive level and provided the most comprehensive look yet at the state of its metagame. There's what feels like an endless amount of information to be gleaned from the collective results of these events, which have set the stage for the upcoming Players Tour and MagicFest in Phoenix this week.

Today I want to bring focus to a story and deck from last weekend that could be overlooked among all of the other exciting news: Izzet Wizards winning the MagicFest in Nagoya in impressive fashion.

After going 14-1 in the swiss, tied for first seed, Takuya Ishizuki swept through the Top 8, not losing a game until the finals where he bested the other 14-1 player. He did it with a deck not many could have seen coming, but his win proves that it's one the Pioneer world needs to take seriously. The deck takes inspiration from the Mono-Red Prowess strategy that has been growing popular in Modern, but is masterfully adapted to the Pioneer cardpool with the aid of a blue splash.

It starts with Stormchaser Mage as another prowess creature. This isn't a burn deck, and it requires creatures (often in multiples) to win the game, so having a critical mass of them is necessary for the deck to function. With both haste and flying, Stormchaser Mage is much more aggressive than an option like Abbot of Keral Keep. It's also critically a Wizard, which helps the deck enable Wizard's Lightning. When it costs one mana, it's the best burn spell in Pioneer and gives red a card that rivals the efficiency of the format's pacesetter Fatal Push, so it's a card worth supporting.

Blue further increases the deck's consistency with Opt, which as real card selection is far superior to something like Warlord's Fury that simply replaces itself. Manamorphose is used in Modern to shrink the deck and increase consistency while triggering prowess, and Opt performs a similar function here. It also helps to get more mileage from Dreadhorde Arcanist, which the deck uses as a two-of to shore up the Wizard count. It's a threat that stands on its own while offering great synergy with prowess creatures, and the card advantage it provides is invaluable.

Generating card advantage is so useful for this deck (since it relies on casting a steady stream of spells to enable prowess) that it plays a full set of Curious Obsession. It's a striking inclusion in a deck that doesn't have any way to protect it, like hexproof creatures or countermagic. It starts to make sense when you consider that it only has to hit once to be effective, replacing itself while dealing at least two damage with its +1/+1 and a Prowess trigger. Trading one mana for two damage is a deal a deck like this will take all day, and that's not even considering the possibility of the creature going unanswered and running away with the game.

The card carries some risk, but because this deck is designed to have creatures in play and can't really win without them, Curious Obsession is really a perfect inclusion. It helps if you see the deck less like Red Deck Wins and more like Selesnya Auras/Bogles.

It's also not completely true to say the deck can't protect Curious Obsession, because after sideboard it has access to numerous countermagic. They can be used to protect creatures while playing a more disruptive game plan, which I found very effective when I first tried the deck on Magic Online and ran into back-to-back Azorius Control opponents.

You can also slap a Curious Obsession on the deck's singleton Hazoret the Fervent, which the deck uses as a one-of haymaker to steal games it might otherwise have no business winning. The God is a huge asset for the deck because opponents will heavily lean on creature removal to beat it, and the indestructible threat will catch many without an effective answer.

A full set of Mystical Dispute anchors the sideboard, and in addition to a single Spell Pierce, provides incredibly efficient one-mana plays for disrupting the opponent. In my matches against Azorius Control it stopped removal ranging from Azorius Charm to Teferi, Time Raveler to Teferi, Hero of Dominaria. Mystical Dispute is also incredible against the Niv-Mizzet Reborn decks, where it counters their big payoffs like Bring to Light and the Dragon itself.

It's also important against the bogeyman Dimir Inverter, where it's a critical answer to their setup cards like Dig Through Time and their actual win conditions, which are blue. All full price it even answers Inverter of Truth effectively. The card feels a lot like playing with Pyroblast and Red Elemental Blast, some of the best Magic cards ever printed, and this deck takes full advantage.

It all adds up to a hyper-aggressive and focused deck with a great linear game plan capable of racing any strategy. Its burn spells allow it to disrupt opposing creatures, and the countermagic in the sideboard is just as useful for protecting its own creatures from disruption as they are for stopping the opponent's plan.

It's no surprise this sort of strategy rose to the top of the MagicFest field in Nagoya. It sounds similar to Mono-Black Aggro and its aggressive plan with discard, or the Spirits deck that truly broke out last weekend by winning the Pro Tour in Nagoya with its own brand of aggressive disruption. Also telling is the rest of the Top 8 at MagicFest Nagoya, which contained two Izzet Ensoul decks in the Top 4, and two more in the Top 8! With aggressive creatures, burn spells, and countermagic in the sideboard, both Izzet strategies can win games in a similar fashion. 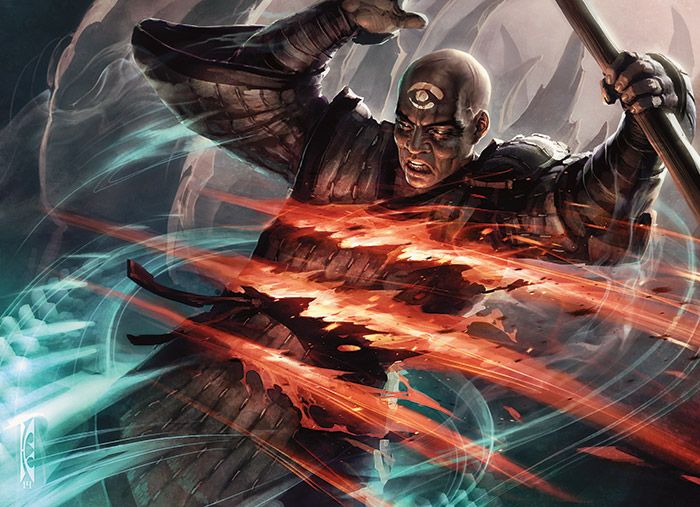 I looked deeper and found that Izzet Wizards has actually been quietly putting up strong results for weeks. In just the week leading up to the Players Tour, it put up multiple successful 4-1 runs in Pioneer Preliminaries, which have been extra competitive recently with pros in them practicing. I'm not certain if the deck's online pilot "Doshimo1110" is the same player that won the MagicFest, but I can tell you that Ishizuki's decklist is clearly the next evolution in terms of technology and is perfectly tuned for the metagame.

What immediately stands out is the removal of Tormod's Crypt from the sideboard, where it was found in previous lists. Ishizuki wagered that graveyard decks would not be prevalent last weekend, and results show that they have fallen off in a large way. Gather the Pack decks like Soulflayer and Dredge were not popular, nor did they put up great results, so graveyard hosers were not necessary. They could do some work against the Sultai Delirium deck that won in Brussels, but it's likely those slots are still better spent on more versatile cards.

The singleton Treasure Cruise, for example, will be great against grindy matchups like Sultai Delirium, and just about any other. In my sideboard plans it's something I use basically every time. That might make it seem like it should be in the maindeck, but it's at its best in post-sideboard games where increased interaction tends to slow the battlefield down while building the graveyard. It's a great pairing with disruption like countermagic and burn-as-removal for playing grindy games of all sorts, and gives the deck the capability to win attrition battles with superior card advantage. The Modern version of the deck plays Bedlam Reveler in the maindeck, and Treasure Cruise helps provide a taste of that here.

Against aggressive opponents, the deck uses not countermagic but a variety of removal spells to interact. Goblin Chainwhirler and Izzet Staticaster (which provides a nice alternative to the same effect) interact while generating card advantage. Reckless Rage is a surprisingly powerful card, and works very well with the prowess creatures and Dreadhorde Arcanist.

Izzet Wizards is equipped to race Dimir Inverter, but they are also well equipped to interact, and present their own ability to win quickly. Post-sideboard games give Izzet greater ability to interact with both their combo and their interaction, so with careful navigation the matchup is very winnable.

Izzet Wizards preys on slow decks, especially blue ones susceptible to Mystical Dispute, so Five-Color Niv should be a great matchup.

Where Izzet Wizards suffers compared to more traditional red decks is against black decks, which with Fatal Push and other disruption are equipped to stop the prowess creatures and leave the deck without meaningful action. In my initial run with the deck, I ran into a Mono-Black Vampires opponent that combined this disruption with Gifted Aetherborn and Kalitas, Traitor of Ghet, and while I put up a good fight, it definitely felt like a losing battle.

Part of the strength of Izzet Wizards is it has capitalized on the great metagame expansion away from Mono-Black Aggro and toward the huge variety of decks we now see. If Mono-Black is the biggest deck in a field, then Izzet won't be the best choice, but it looks perfect now in a world where Mono-Black seems to be in decline as other decks steal the show.

If they are Vampires, keep the Wizard's Lightning over Shock.

In theory, Izzet Wizards will also suffer against other red decks, both because of its vulnerability to removal and its painful manabase. That didn't stop me from beating the two Mono-Red decks I ran into in my first foray with the deck, and I learned the deck certainly has the tools to win the matchup. The burn gives Izzet plenty of answers to their creatures, and the fact that none of Izzet's creatures are vulnerable to Goblin Chainwhirler is a nice advantage. Reckless Rage from the sideboard proved invaluable as a way to take down Torbran, Thane of Red Fell.

Bant Spirits winning the Players Tour has earned it a lot of attention and should make it a popular deck. That should be a good thing for Izzet Wizards, which can get under its disruption while removing its creatures: a winning strategy. Spirits is also a blue deck, which makes it vulnerable to Mystical Dispute, but I'm not sure Dispute is actually better than burn spells.

The Sultai Delirium deck that won in Brussels (with black disruption, Abrupt Decay and solid green creatures like Courser of Kruphix) will be a tough matchup. Unfortunately, the sideboard doesn't help much either, as they are not particularly vulnerable to countermagic or removal. Their biggest weakness is the three-color manabase with its painful and slow lands. With the right aggressive draws, Izzet can get there with its usual game plan.

Adam Yurchick is a competitive Magic player and writer. He writes about Modern, Pioneer, and Eternal formats, and keeps a weather eye on shifts in the metagame.