Magic: The Gathering has been a bit hectic lately. Between cards like Uro, Titan of Nature's Wrath wreaking havoc on all manner of formats to MTG Arena being swarmed with literal bugs, things have not been restful for players when it comes to gameplay. Today, Wizards of the Coast announced that they are keeping a close eye on the Standard format and have plans to announce changes to the format early next week. 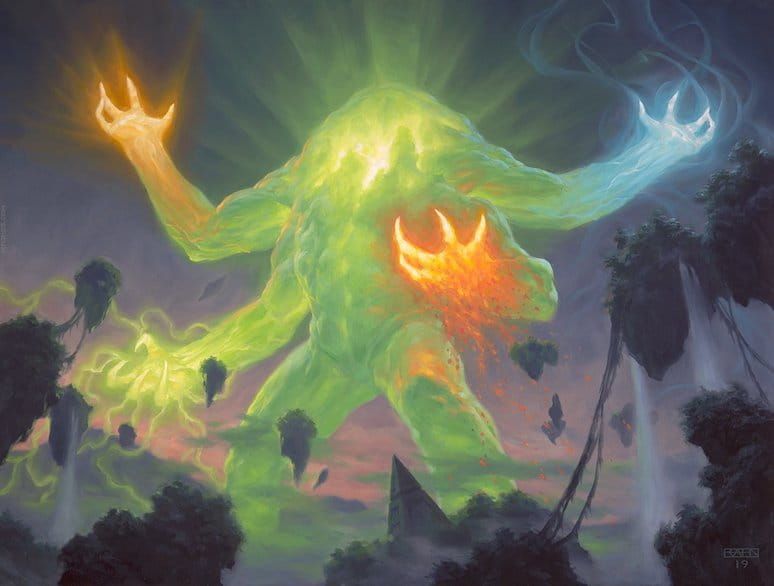 Artwork for Omnath, Locus of Creation from Zendikar Rising. Illustrated by Chris Rahn.

Bans in Standard as a regular occurrence used to be relatively scarce. Before 2019, the most prolific set of bans came around Darksteel with the removal of Arcbound Ravager, Disciple of the Vault and the artifact lands from the format. Since that point, up until last year bans were infrequently administered.

In 2017, a few more cards were banned from Standard but it wasn't until 2019 when, across formats, there would be a banlist update for nine months of the year. That year, five cards were banned in Standard, although a few of these have since rotated out.

This year is no different, with bans being announced on any given Monday as needed. At this time, six cards were banned from Standard, although of the six, four have rotated from the format. However, the potential update to the banlist that Wizards of the Coast will be putting out next week is at the very start of a new rotation.

Four-Color Omnath decks have been prevalent in Standard since Omnath, Locus of Creation and Lotus Cobra were released. A large number of decks in this archetype have seen competitive success. It doesn't seem likely that Wizards would ban either of these cards soon, but it is possible—if it happens, it would likely be the quickest ban of a card based on power level alone in the history of the game. Tournaments on MTG Arena have been numerous with the proliferation of COVID-19 and as such Wizards of the Coast has been shifting most of their gameplay focus onto that interface. This means that while cards like Crystalline Giant are fine (with a randomization factor that works much better online than on paper), cards like Scute Swarm are a major problem for the game.

The problem with Scute Swarm is more a sign of the limitations of MTG Arena than of any computational problems.

As it stands, despite the fact that Scutes can propagate simultaneously, the triggers all need to stack and be resolved one-by-one. This leads to major problems in the slowing of the game. As a result, Wizards of the Coast may ban Scute Swarm from Standard. If they do that, though, they would likely want to have such a ban affect all formats on MTG Arena, so this may not be the case after all.

Uro, Titan of Nature's Wrath has been a thorn in Standard's side since it was printed in Theros Beyond Death. Most if not all Standard events have seen at least one deck featuring the Elder Giant reach the Top 8 from the time of the card's release.

Uro, Titan of Nature's Wrath has dominated the meta at many points, and is sticking around in Standard until the next rotation if it isn't banned. The Titan's ramping ability paired with the unfortunate timing with land-centric set Zendikar Rising is an excellent reason to consider Uro, Titan of Nature's Wrath as a candidate for the chopping block. Will it be banned from Standard? Wizards of the Coast knows, but time will tell whether that time, if it exists, will be next week.