Kia ora! This week we'll be looking at the deck of one of the most loveable goofballs to grace Yu-Gi-Oh!, Yugo from Yu-Gi-Oh! ARC-V.

Yugo was an unbelievable red herring of a character, first introduced as a menacing Turbo Duelist opposing Yuto in a flashback. But when Yuya Sakaki met Yuto for the first time and their Odd-Eyes Pendulum Dragon and Dark Rebellion Xyz Dragon clashed, Yugo's Clear Wing Synchro Dragon summoned him to the Standard Dimension, and he proceeded to crash into a lamppost.

Yugo believed Yuto had kidnapped his friend Rin, while Yuto believed Yugo to be a "Fusion follower" owing to the unfortunate coincidence of Yugo's name sounding very similar to the Japanese word for Fusion. Yugo's deck didn't help matters since it was full of "roid" monsters, which were previously a Fusion theme! It was Yuri, their Fusion Dimension counterpart, who had really kidnapped Rin, and once Yugo realized he'd made a mistake he set his sights on taking Yuri down to get Rin back. 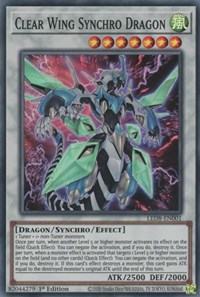 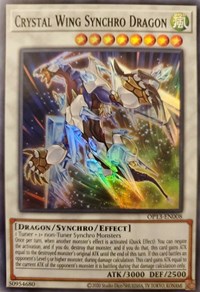 Despite his hot-headed temperament, Yugo was an excellent Turbo Duelist, backed up by his Speedroid Deck. His Clear Wing Synchro Dragon was a highly versatile monster, and could be upgraded into Crystal Wing Synchro Dragon. He also had several other powerful "Hi-Speedroid" Synchro Monsters waiting in his Extra Deck.

Today's Episode Deck will muster the new cards Speedroids received in Legendary Duelists: Synchro Storm with the best of Yugo's older favorites — though since we're basing this deck on Yugo in the anime, we'll largely be excluding the Pendulum Monsters he used in the manga.

Speedroids have an eclectic set of Main Deck monsters; half of them either summon themselves or other monsters, and the other half have effects to advance your plays in other ways. The best "Speedroid" is the sadly-Limited Speedroid Terrortop, which can Special Summon itself and add another "Speedroid" to your hand. 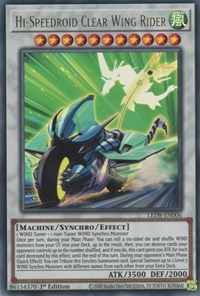 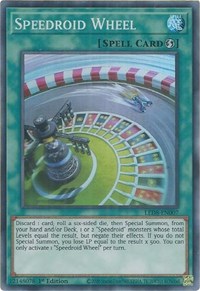 The new Speedroid Ultra Hound can send Speedroid Den-Den Daiko Duke to your graveyard to summon other Tuners from your hand or graveyard, giving you flexibility if you draw a hand of monsters that can't swarm. Speedroid Fuki-Modoshi Piper can help dig through your deck, but we'll only run two since it can't summon itself and relies on an established field.

By his own admission, Yugo wasn't afraid to rely on a bit of good luck, which can be seen in cards like Re-Dyce-cle, Speedroid Gum Prize, Hi-Speedroid Rubber Band Shooter, the new Hi-Speedroid Clear Wing Rider and the new Speedroid Wheel, which at minimum can summon either Speedroid Red-Eyed Dice or Speedroid Maliciousmagnet. 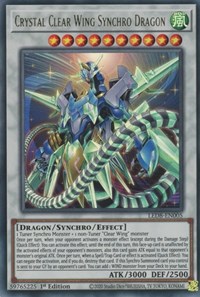 For some odd reason, Yugo never Accel Synchro Summoned in the anime. The new Crystal Clear Wing Synchro Dragon fixes that and adds Spell/Trap negation to boot, while trading it for a slightly weaker response to a monster effect. Yugo's TK2000PS Duel Runner was destroyed late into the series, but finds new life as Hi-Speedroid Clear Wing Rider

Don't think "Speedroids" are finished getting support yet either! The long awaited Speedroid Scratch should be coming in Brothers of Legend next month, along with other cards to support any of the themes in Legendary Duelists: Synchro Storm. Fingers crossed that Speedraw might eventually make its way into the real game as well!