There are so many memories of the original Yu-Gi-Oh! anime that are now seared into my brain. As a kid growing up and watching the anime, I can vividly remember moments from the show that I haven't seen in nearly two decades: epic duels, powerful monsters, incredible comebacks, and whatever the heck was going on in episodes 47, 48, and 49. You know the ones: following the Duelist Kingdom saga, Yugi ends up facing off against Duke Devlin in a game of Dungeon Dice Monsters. But what exactly was that crazy game with unfolding dice and Dungeons & Dragons-like monster pathing?

The original Yu-Gi-Oh! anime was notorious for playing fast and loose with the rules of 'Duel Monsters'. Attack the moon? No problem. Destroy the floatation ring of a floating castle to send it crashing into your opponent's monsters? Makes sense. Fuse your Mammoth Graveyard into your opponent's Blue-Eyes Ultimate Dragon to slowly weaken it, turn by turn? A totally valid strategy. Still, Duel Monsters was somewhat grounded by its real-life counterpart. Dungeon Dice Monsters, on the other hand, didn't have an established real-world version. Understanding the rules of the game from the episode itself was extremely confusing, and naturally the anime and manga version of the game play by slightly different rules.

Playable versions of Dungeon Dice Monsters do exist, and we'll talk about them, but first we need to cover exactly what was going on in those three episodes of the anime.

Duke Devlin does a fairly good job of explaining the rules to Dungeon Dice Monsters in the anime, but like most Yu-Gi-Oh antagonists, he prefers to offer explanations either as things are happening, or after it's too late. As a result, Yugi struggles for turn after turn without being able to play a single monster — roughly the equivalent of drawing an opening hand containing only high-level monsters. That's all because Devlin fails to explain the first step in Dungeon Dice Monsters: building your Dice Pool.

Like the Main Deck, the Dice Pool contains the fifteen dice that represent every monster or item at the player's disposal. Constructing a Dice Pool makes an enormous difference in the way the game will play out, and it has a massive impact on the odds of summoning monsters. For example, playing a variety of monsters with different levels, and especially high-level monsters, can make summoning more challenging. Other combinations of dice might make it easier for you to move your monsters, launch attacks, or activate special abilities. Yugi wasn't told any of this before he started his duel, and he nearly lost because of it. Luckily, his heart of the cards, or heart of the dice, pulled through in the end. 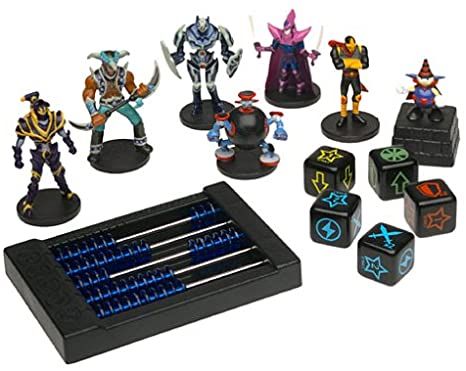 Each dice is associated with a specific monster and has its own set of 'crests' attached to each side. Monsters have their own Level, ATK, and DEF stats, and an HP stat in addition to a Type and some sort of unique effect. Because it's so important to summon, or 'dimension', a monster in this game, the most important attribute of any dice is the monster's Level and number of Summon Crests. There are four Levels of monsters that correspond to a specific number of Summon Crests on their dice: Level 1 monsters have four Summon Crests, Level 2 have three Summon Crests, and so on. Each Summon Crest also has a Level that's equal to the Level of the monster. For example, a Level 1 monster has four Level 1 Summon Crests.

Following so far? Here's why the number and Level of those Summon Crests are important: each player will roll three dice during their turn, and to summon a monster, they'll need to roll two Summon Crests of the same Level. It's not enough to roll two Summon Crests with different Levels — they have to be the same to summon a monster with that Level. This means you'll want to play plenty of monsters with around the same Level, so you can match their Summon Crests. That said, you can't simply play a bunch of Level 4 monsters and hope to overwhelm your opponent with their superior stats. These dice have just one Summoning Crest, so rolling two Crests among three dice rolls is unlikely.

If you do manage to summon a monster, you'll be able to dimensionalize its dice on the board. You can choose whatever configuration you like for the tiles, as long as all six pieces are adjacent to each other, although there are technically only ten legal configurations that can be rotated four ways. You can't overlay a tile over your opponent's tiles, and you can't leave the 13 x 19 board space. From there you can access your Crest Pool to enable certain actions, or pass turn to your opponent. Each player continues rolling dice three at a time from there until one player defeats their opponent's Monster Lord by attacking it three times.

Now we know how to summon or 'dimension' monsters, but what about the rest of the game? For starters, each player's goal is to defeat the Monster Lord or Die Master located at the center of the row closest to their opponent. These Monster Lords are basically the equivalent of your opponent's Life Points, and attacking them is basically the same as attacking your opponent directly in Yu-Gi-Oh. In the anime, neither player has a monster lord, but their Life Point equivalent called 'Heart Points' are represented by large indicators on the platforms they're standing on.

Reaching your opponent's Monster Lord is a lengthy process. You'll need to construct a pathway using the tiles of your dice that lead from your side of the board to your opponent's. Your opponent will be doing the same, and eventually your paths might meet up somewhere on the field. That doesn't mean you're cut off! Instead, you walk your monsters across your opponent's tiles to reach their Monster Lord, fighting off your opponent's monsters along the way. Think of it like building a dungeon: when you're laying down pieces, you're constructing pathways that might be used by your opponent, so leaving a powerful monster near your Monster Lord can help keep your Heart Points safe. That said, prioritizing easily summoned Level 1 monsters in the early game is arguably the best strategy for establishing early control of the board. 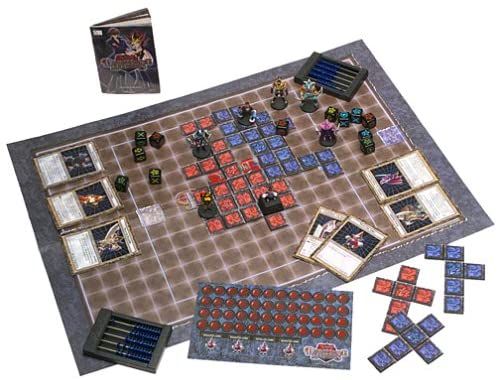 Monster movement, attacking, defending, and the activation of special skills are influenced by the Crest Pool. The non-Summon Crest sides of the dice include some combination of Attack Crests, Movement Crests, Defense Crests, Spell Crests, and Trap Crests. These resources play out like mana in games like Magic The Gathering, and you'll continue to build up a pool of them as you roll each turn. Every time you roll a non-Summon Crest, you'll add that Crest to your pool. You can stack up an unlimited amount of Crests in your Crest Pool.

You can spend one Movement Crest to move a monster one tile, and you can move an unlimited number of times per turn. You can even mix in other actions between movements! Spending an Attack Crest lets you attack a monster once per turn, while a Defense Crest can be spent to 'activate' a monster's defense stat when it's attacked. Spell and Trap Crests are used to activate special abilities, including abilities that respond to certain conditions that arise during the game.

Damage calculation is a little odd. Monsters have 10 HP per Heart and typically three hearts. An attacking monster has its ATK subtracted from the HP of a defending monster. Using a Defense Crest subtracts the DEF of the defending monster from the attacking monster's ATK, therefore reducing the damage it takes. Some monsters can't be attacked by others, depending on their attributes. Monsters that can Fly can't be attacked by monsters on the ground, while monsters with the Tunnel ability can bypass other monsters.

The original anime airing of Dungeon Dice Monsters might have led you to believe that the game would show up from time to time during the original series. Well, that didn't happen. Support for the game in real life was inconsistent and brief. In 2002, Mattel published a physical version of the game with slightly different rules that included figures and cards, but it wasn't supported for long. The Game Boy Advance game Yu-Gi-Oh! Dungeon Dice Monsters was released in North America in 2003 as a digital alternative to the physical game, although these days it's incredibly dated. 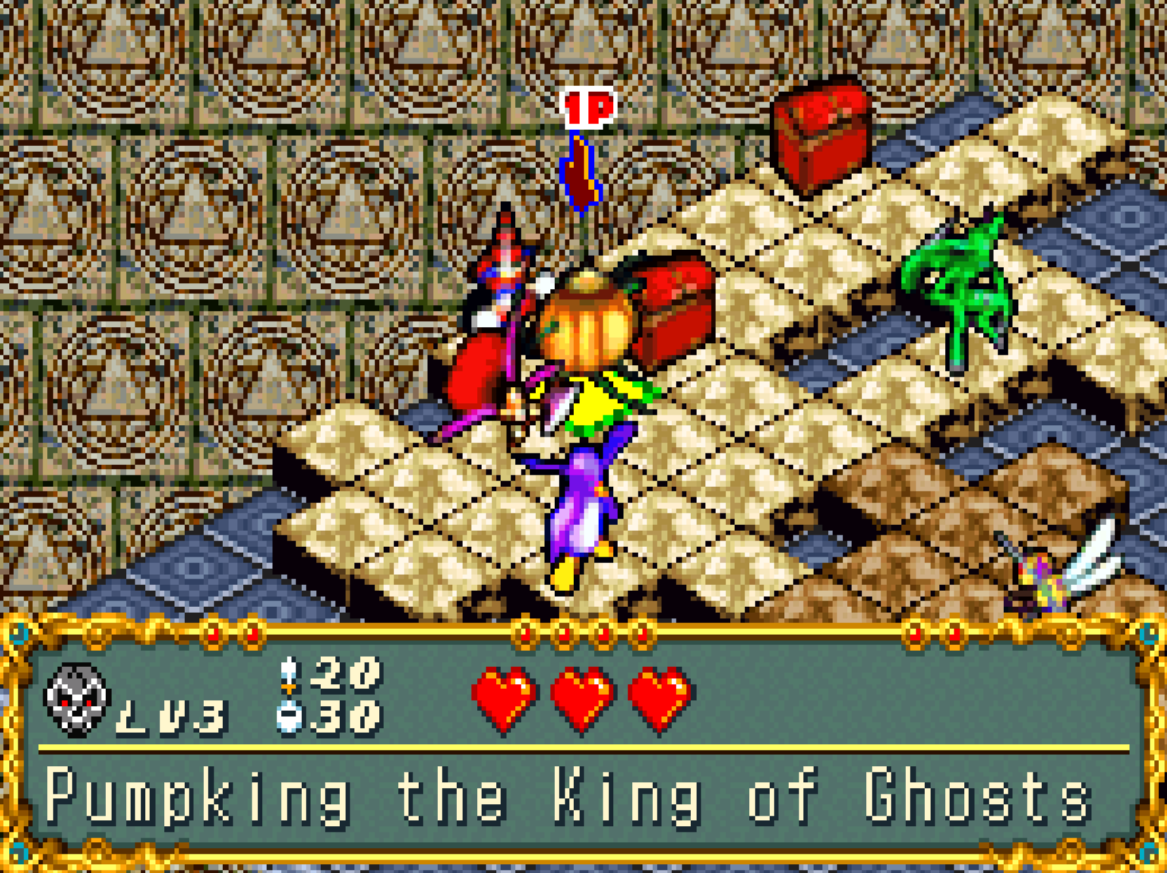 Dungeon Dice Monsters was probably never intended for commercial success. Yu-Gi-Oh as a manga series was originally about a boy who played a variety of games — not just Duel Monsters — and the Dungeon Dice Monsters episodes and manga chapters are largely a throwback to that era. Yu-Gi-Oh hasn't had much success establishing alternative formats, so the idea that an entirely new game could be supported on the side so early into the game's existence seems laughable today. That said, the OCG's ongoing experiment with Rush Duels shows that there's still plenty of space for different kinds of games to exist in the Yu-Gi-Oh universe.