There are plenty of questions about what Yu-Gi-Oh will look like in 2021–at least in terms of organized play. Luckily we already have a good amount of upcoming product info for the new year, including two new core sets, a Structure Deck, and the return of Ghost Rares.

So what's coming up? These are the new releases you should mark on your calendar as we head into 2021.

Like Season 1, Season 2 Ultra Rares are also available in a special variant color with green, purple, or blue foil text. But it's a little different this time around: in Season 1, there were two separate card pools for Ultra Rares - one pool for the "Colorful" Ultras, and a second, smaller pool for regular Ultras. That rarity scheme created a situation where the regular Ultras were realy easy pulls, and it dragged down the value of the set overall. This time, all the Ultras are in one pool, so you'll have an extra chance at pulling any one particular Ultra Rare you want, and none of them will be auto-cringe pulls like the regular Ultras in Season 1. Plus if there's a specific color you want - including the original gold name stamp - you'll be able to hunt for your preference, because they'll all be available in every foil.

There are also two new cards in this set: Blue-Eyes Abyss Dragon and Galaxy-Eyes Afterglow Dragon. Personally I'm most excited for Afterglow Dragon in combination with the Photon Orbital reprint. Galaxy and Photon decks are about to become much more affordable and more competitive, which is a nice consolation prize after they lost the Create-A-Card Project.

Yu-Gi-Oh's next core set, Blazing Vortex, is scheduled to hit the TCG in early February, and its release is headlined by the Armed Dragon Thunder subtheme. Armed Dragon dates back to 2004, but somehow it took over sixteen years for Konami to return to the game's first LV themes. The new subtheme is exciting, although Dragon Link players are chiefly interested in Armed Dragon Flash, which can act as even more copies of Quick Launch.

The theme's new ace is Armed Dragon Thunder LV10: a highly resistant card with a Quick Effect that both destroys cards on the field and boosts its ATK by 1000. If it survives your opponent's turn you could end up attacking for 4000 or even 5000 damage in combination with the theme's support cards. Armed Dragon Thunder is a no-frills beatdown strategy that's a welcome sight as we head into the new year. It's simple, to the point, and it has giant Dragons that you can thump your opponent with. What's not to like?

There's a lot of retro support in Blazing Vortex, including new Fabled, Ojama, Windwitch, Digital Bug, and Dragunity cards. The set is massive fanservice for players who've stuck with the game for years, and it delivers long-awaited support for the favorite themes of our own writers here at Infinite. There are new themes too, of course, like Security Force and Sprigguns, plus new generic cards like Pot of Disparity and Miradora, Skywing of the Whirlwinds.

I think we'll end up seeing a lot of debate post-Blazing Vortex about the decision to play either Pot of Extravagance or Pot of Disparity. The difference between the two is deceptively big: would you rather draw two cards off the top of your deck, or would you rather take your choice of one card from among the top six? Disparity's definitely the better choice if you're looking for a specific card, but Pot of Extravagance is better card economy when none of your cards have a huge power spike above the rest.

Winter gets even colder in February with Structure Deck: Freezing Chains. Ice Barriers return in with a new Synchro and new Main Deck monsters: something the theme desperately needs to exist independently of cards like Trishula, Dragon of the Ice Barrier. The Ice Barrier theme's been a joke since it debuted in Hidden Arsenal all the way back in 2009. The deck's Synchros were among the best cards in the game, but the Main Deck cards were almost completely unplayable. That's changing with Structure Deck: Freezing Chains and the Main Deck cards that debut in it.

The new Ice Barrier engine is updated to the pace of today's game. General Wayne of the Ice Barrier–possibly on loan from the X-Sabers–adds more field presence and consistency to a deck that desperately needs the help. General Wayne, Mirror Master of the Ice Barrie, and Vessel Miko of the Ice Barrier all have floodgate effects that keep your opponent from sending spells and traps to the graveyard, shut down Tribute Summons, and lock up Defense Position monsters. They pair up fantastically with General Raiho of the Ice Barrier: a surprisingly strong card from 2011 that's never had enough support, until now.

Ice Barriers are poised to be a fun and competitive Synchro-based strategy right out of the box, and thanks to a new Main Deck line-up they're more than capable of keeping up with today's best decks.

Ghosts From The Past is an absolutely massive set that you might want to start saving for. It's not just an opportunity to get your hands on five new Ghost Rares, it's also your chance to pick up new themes, new support for existing themes, and a huge number of reprints. There are 87 reprints in the set and 45 new cards, which puts the total at an incredible 132 cards. For context, sets like Maximum Gold were larger in terms of their total card pool, but all 162 cards in that set were reprints. This time you'll also be chasing new cards and themes among the reprints. The last time we had a set like this was Toon Chaos, and that release was half the size of Ghosts From The Past.

The Plant theme Sunavalon make their debut in Ghosts From The Past, and there's support for Shaddolls and Ciphers. There's also Dragunity support in this set that was pulled from the OCG's latest Dragunity Structure Deck. That's bad news if you were waiting on Structure Deck R: Dragunity Drive to come to the TCG, but the good news is that every card in this set will be foil. It's going to be a must for every Dragunity fan, including myself, and I'm hoping at least one existing Dragunity card will get a Ghost Rare print. 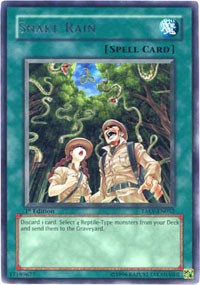 Ancient Guardians is set to launch at the end of April, debuting three new themes in the TCG. You can head over to the official website to catch a preview of each, but we'll have to wait a bit longer to get official information.

We do know that at least one theme is hinted to be Reptiles, and the other two are Pendulum and Synchro-based. Get those copies of  Snake Rain ready: Reptiles might finally be competitive!

Lightning Overdrive And Beyond

The next core set following Blazing Vortex is titled Lightning Overdrive, but at the moment we don't know when it's arriving in the TCG. It's currently slated to hit the OCG on January 16th, and it'll have retro support for Bujin, Ice Barriers, X-Sabers, Traptrix, and a new Sky Scourge monster. The new Amaze theme equips traps to either Amazement monsters or monsters your opponent controls to apply different effects, and I imagine it'll end up being one of the more popular themes to chase in Lightning Overdrive. We're still getting spoilers for upcoming cards in the set, and the full card list in the OCG should be available in the coming weeks.

We're in the dark after Lighting Overdrive, but we do know the name of the core set folllowing it: Dawn of Majesty. I can't glean any information from that set name, although there are five existing cards with 'Majesty' in their names. Maybe this is the second round of support that Majespecters have been waiting for? At any rate, the first half of 2021 is already loaded with new cards, themes, and plenty of retro support. I think Ghost of the Past and Legendary Duelists: Season 2 are the top priorities for anime fans and collectors, and Blazing Vortex will be a must for seasoned duelists who are looking to stay competitive in remote duel events.

The Ice Barrier Structure Deck is a great entry point for newer players, and it's got the same sort of flashy Synchro Summons that got so many of us hooked on modern Yu-Gi-Oh. Trishula, Dragon of the Ice Barrier is such a game-defining card, and its retrain Trishula, Subzero Dragon of the Ice Barrier is just as impressive. If you're trying to get someone into the game for remote duels, or you're looking to play a new deck without spending too much money, then I think Structure Deck: Freezing Chains is a perfect fit for you.