While most people don't accomplish much by zoning out in class, Jay Schneider is not "most people."

Schneider, who was one of the early Magic: The Gathering theorists, discovered the concept of "the mana curve" while paying less-than-full attention in a calculus class.

Schneider was more interested in preparing for the first big tournament of the region, he said.

"I was as card light as my friends and we all agreed to a $22 spending limit," Schneider said in an email interview. "I was trying to figure out a deck in my cardpool that could beat the decks that I was seeing on MTG-Strategy."

As Schneider poured over the decklist that he had printed out in the computer lab before class, a moment of genius hit. 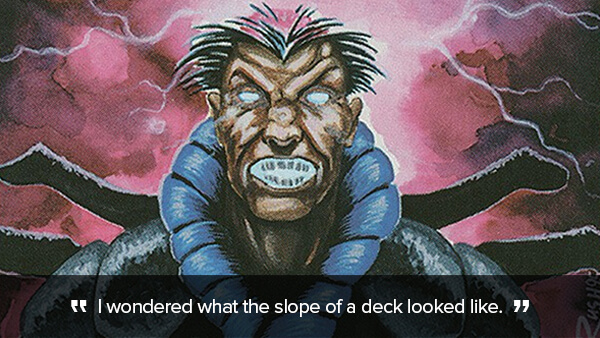 "By the end of class I was jonesing to head home and do some trial runs with different mono-colored decks with theoretical optimal slopes."

By the end of the week, a deck had been born from the forge of Schneider's mind. His deck-testing partner, Paul Sligh, was being steamrolled repeatedly by the new deck, which was known as "Geeba."

"Geeba was always a blast to play, especially back in the early days when people hadn't heard of game principles that later came to be widely known," Paul Sligh said in an email interview. "(Things like) mana curves, board control, disruption and card advantage.

"Without that understanding, opponents didn't have a clue about what they were really facing or how to deal with it. Many people saw Geeba and snickered, because it looked like somebody's kid brother built it out of spare commons they had lying around."

What made "Geeba" so special is that it had more one-and-two drops than anything that cost three or greater. This allowed the deck to efficiently use its mana every turn, squeezing every drop of mana out of a land that it could.

"It took second place in the tournament," Jay Schneider said. "I think I won $75, a mox and a bunch of packs."

The deck was odds and ends of things and didn't have a playset of Lightning Bolts. Schneider ended up borrowing some copies of Chain Lightning, he said.

With $75, a Mox, and some winnings in hand, Schneider could now push the deck to its limits.

"The deck took second place in the next two $250 tournaments run in Atlanta," Schneider said. "The fourth tournament of the set was a Pro Tour Qualifier.

"I was out of town visiting my mother and lent my deck to Paul Sligh. The rest is pretty much history."

Paul Sligh piloted the deck well and made some waves in tournaments. "At the time of the tournament, I had fairly little experience playing Geeba, but I had played against Geeba a lot," Sligh said. "Jay and I played together and practiced together, and often had top one or two finishes in local tournaments.

"One of my many fond tournament memories was of the two of us playing at the finals table of a moderately large tournament, calm and relaxed, kidding each other and calling out each other's next play. The spectators couldn't figure out what to make of us, or how either of our unlikely-looking decks had made it that far. It was pretty funny."

"Geeba" became known as the "Sligh Deck," despite Paul telling everyone that it wasn't his deck. It was Schneider's brainchild, not his.

"It was embarrassing at times, though," Paul Sligh said. "I would get asked to autograph cards at conventions or tournaments, and have to explain that I was happy to give them the autograph, but I hadn't actually invented the deck, only jockeyed it for Jay.

"Our local Atlanta groups knew the full story and had fun ribbing Jay and I about it, but the Internet kind of drowned that out."

Schneider said there were never any tensions between Paul and himself, even though Paul got all of the credit.

"Paul is a lifelong friend and we served in the military together," Schneider said. "He was my primary playtesting partner when we started, he was part of my wedding ceremony and we still visit on occasion, even though we live on opposite coasts."

That isn't to say that Schneider fell into obscurity and was never heard from again. He was approached by Wizards of the Coast to become a member of Research and Development.

He ended up becoming the designer, developer and game producer for Duels of the Planeswalkers. Schneider did the original game and the first three expansions. He also had a secondary development role on the Zendikar and Scars of Mirrodin sets.

"This R&D background led to the opportunity to run my own game design studio called 'Fire Opal Media, Inc.,' which I've done for the last few years with a pretty amazing team of Wizards R&D alumni."

Jay Schneider also wrote a decade-long column for "The Magic Dojo," one of the earliest Magic: The Gathering websites. The column was known as "The Decks of Jay Schneider."

If you think that Schneider's discovery was one of the last great discoveries in Magic, you're probably wrong, he said.

"Innovation is what R&D pour into Magic with every new block and set," Schneider said. "There's a little known fact that R&D development doesn't try and discover everything, such as all the rules, all the best decks and things like that about a new set before it's released.

"They try and design a set where the community at large will be able to discover the majority of the awesomeness of a set over the course of the sets' 'standard lifecycle.'"

At the set level, you're very likely to have something new to discover, he added.

"Each of those sets contributes something to a greater whole," Schneider said. "As such there's always more to discover on a macro level of Magic as a whole."